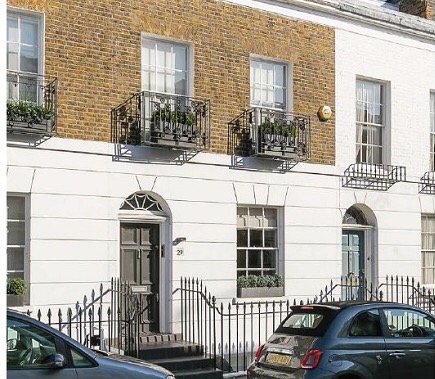 The former home of P. L. Travers, writer of the children’s classic Mary Poppins novels, is up for sale in London.

“The 2,195-square-foot terraced mews house, built in the 19th century, was purchased by Ms.Travers in 1962 following the release of the fifth book,” wrote Mansion Global writer Yaling Jiang. “She wrote three more in the following years and lived there until her death in 1996 …the house itself appeared in [the 2013 film] Saving Mr. Banks.”

According to the real estate agency, Russell Simpson, the house is, “A light four bedroom Grade II listed house presented in immaculate condition throughout, in the heart of Chelsea. The house is situated just off Kings Road on the eastern side of the street.”

The home was bought by the current homeowners in 2014. It features four bedrooms, four bathrooms, two terraces, three reception rooms, and a spacious private backyard garden.

The kitchen, dining room, sitting/cinema room, utility room, half bath, and outdoor garden are located on the lower ground floor.

Entering the ground floor through the front doors reveals a reception room, a wine room, as well as a sitting room and study – where Mrs. Travers wrote. The study also overlooks the garden.

Although the home was recently renovated and bears no resemblance to when Mrs. Travers lived there, the very fact that she resided in the home makes this an amazing place.

Additionally, in the past couple of years, two properties connected to Peter Pan author Sir JM Barrie were sold – one in London and one in Surrey Hills AONB.

“Originally called ‘Black Lake Cottage’, the stunning open-plan country house was the summer retreat of author Sir JM Barrie from 1901 to 1908, the years in which he created Peter Pan,” wrote Alexandra Fraser for Country Life. “At the house in the summer of 1901, Barrie made a photo-book called The Boy Castaways of Black Lake Island, charting the adventures of the three Llewelyn Davies boys – the sons of Barrie’s London neighbours and close family friends, who often stayed with the writer at the cottage. Barrie created the character of Peter Pan to entertain the boys, spinning out a tale about how the youngest of the brothers (Peter) could fly.”

Also sold was the upper floor, now a flat, of the original residence of the Llewellyn Davies family, who were friends with and London neighbors of Sir JM Barrie. The house, including the upper floor children’s bedroom, was the inspiration for Barrie’s classic novel, Peter Pan.

In CountryLife.co.uk, Toby Keel wrote that Olivia Higginson, estate agent for the property, said, “‘It’s a lovely piece of literary history. From this top floor flat you can put yourself in the shoes of the Llewelyn Davies children, in what would have once been their nursery, and imagine setting out on that first flight to Neverland.'”