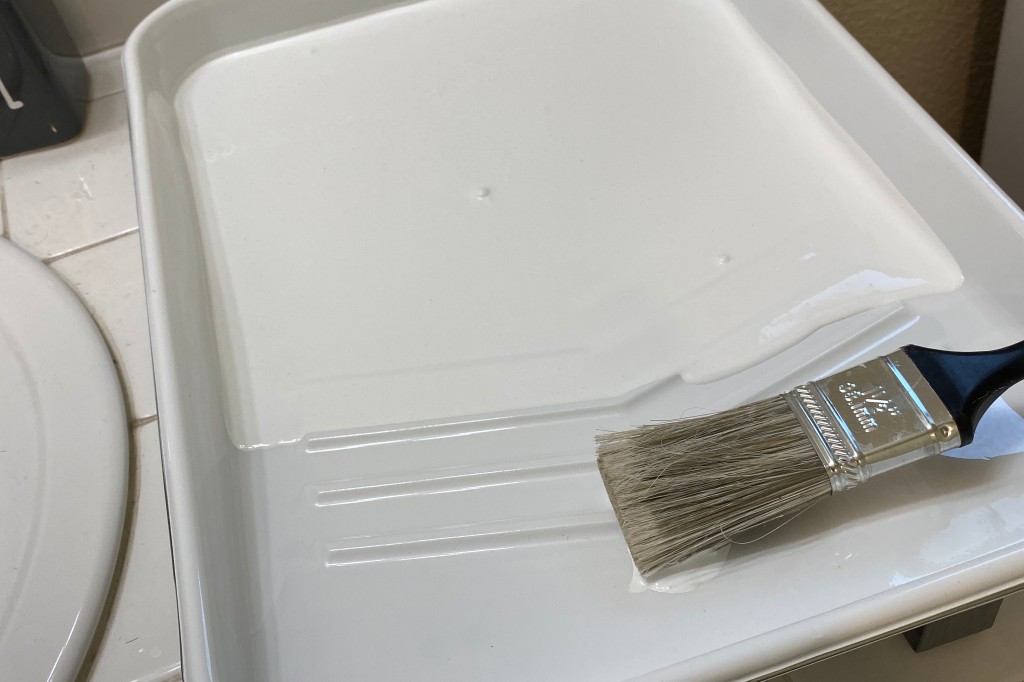 It’s been a busy week! After deciding to renovate our Disney bathroom and finally coming up with a Main Street USA theme, a lot of hard work has happened in two weekends (and a few of the weekdays between).

If you missed the “before” pictures, you can catch more of those in Part 1.

The first Saturday was probably the most productive of them all. After emptying the room, I headed to the big orange box retailer for paint, paneling, and most of the other supplies I needed for the remodel. The socially-distanced line went quickly, which is good thing because there would be several more trips before the week was over for things I forgot I needed. Wear your mask!

It’s amazing what a coat of paint will do for a room, especially when you switch to a bright white. In the third picture below, you can see the difference between old and new. The unpainted wall will, by the end of the week, become one of my favorite parts of the room.

Sunday was just as busy. While at the end of the day, it didn’t look like much got done, my tired body said otherwise. In addition to installing the light fixture, I painted the cabinet, the door, and all of the trim.

It was during the second trip to the store that I finally settled on this light fixture and themed LED bulbs. It took another trip to a different store to get light bulbs that weren’t so powerful they’d blow the circuit. Whoops! I like it because it has a nice hint of Main Street without being overly themed.

With the weekend over, not as much work got done each day, but there was still progress. On Monday I installed the new faucet, toilet paper holder, and mirror, plus painted the air conditioning vent.

This is actually the second mirror I picked up and I like it much better than the first. I wanted something that was reminiscent of a Main Street window, and I think this works. After putting it up, I decided that the towels and other accessories would likely be that light grey.

Tuesday was Cinco de Mayo, so no work got done, but BIG changes happened on Wednesday. With the help of family, the first panel of faux brick was installed. I love it!!

As you can see from the pictures, there were still two other sections to install, but that would have to wait for the weekend.

Thursday and Friday were fairly quiet and only a couple minor things got done, like installing a new toilet seat and the air conditioning vent.

The second Saturday, I was shopping again to pick up some accessories, since I had every hope that the room would be mostly done by the end of the second weekend.

The second Sunday was a big day. The remaining paneling went in!!!

Then after another trip (I KNOW!) to the big orange box store, the towel bars and shower curtain rod were installed and the room looked (mostly) complete.

The towel bars were among my oldest plans for this room. I wanted something that reminded me of Disneyland queues and I think they turned out perfectly.

I had a little trouble with the measurements on the shower curtain rod, but it hasn’t fallen yet, so I guess it worked out.

After a week of construction dust, it was nice to once again have a usable bathroom. I’m actually pleased with myself for getting the bulk of the work done so quickly.

There is still more Disney magic coming to the room, with some attraction posters being hung on the brick wall and an awning, yes awning, going over the window, plus one other surprise. Stay tuned!

Next up: The final details and a look at the completed room