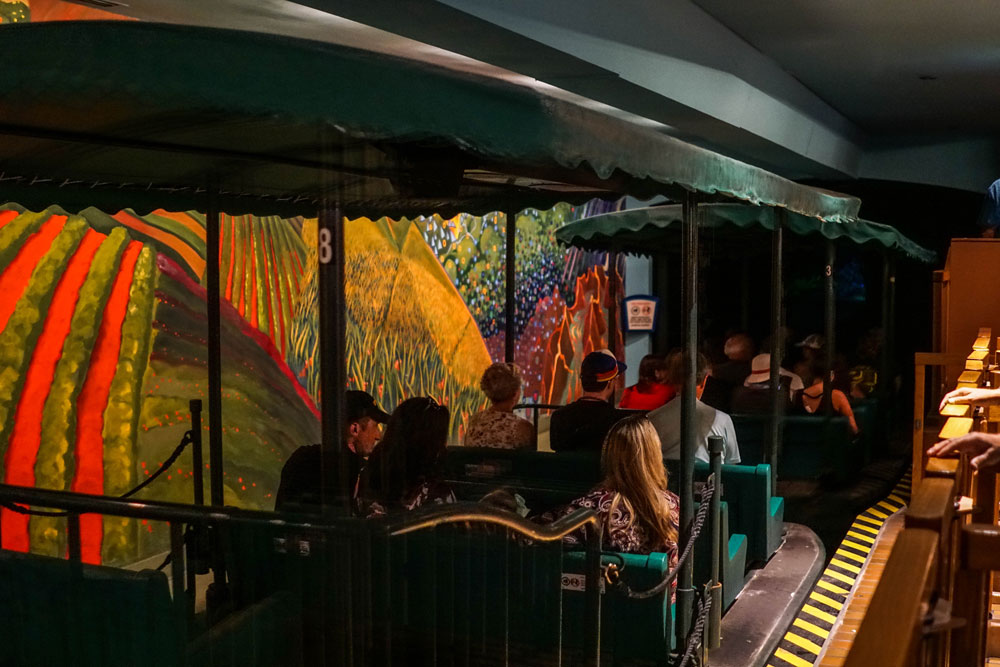 Disney theme parks don’t seem to have much interest in non-IP rides. Here, IP stands for intellectual property, which means a work or invention that is the result of creativity. So, for example, the animated Moana and One Hundred and One Dalmatians are Disney IP, as are all other Disney-created movies or shows.

The most recent [Disney IP] attractions to have opened in Walt Disney World’s Magic Kingdom are Seven Dwarfs Mine Train in 2014, Under the Sea – Journey of the Little Mermaid in 2012, and Monster’s Inc. Laugh Floor in 2007.  For Epcot, there was Frozen Ever After in 2016, Gran Fiesta Tour Starring the Three Caballeros in 2007, and The Seas With Nemo and Friends in 2006. For Disney’s Hollywood Studios, Toy Story Midway Mania opened in 2008. Animal Kingdom saw the opening of Avatar Flight of Passage and Na’vi River Journey in 2017 — here we also see our sole original attraction with Expedition Everest – Legend of the Forbidden Mountain in 2006.

Disneyland isn’t much better. Finding Nemo Submarine Voyage opened in 2007, Buzz Lightyear Astro Blasters in 2005, and The Many Adventures of Winnie the Pooh in 2003.  Disney’s California Adventure is more of the same with Guardians of the Galaxy: Mission-BREAKOUT! opening in 2017 and Luigi’s Rollickin’ Roadsters debuting in 2016.

All of these latest attractions illustrate the fact that Disney just isn’t that interested in opening original-storied attractions anymore. I can’t say with any absolute certainty why that is. It could be merchandising — people are more likely to buy products at the end of the attraction gift shop if they are already familiar with the characters, like Anna and Elsa or Darth Vader. It could just be easier for imagineers to come up with story lines that already exist. Could this also mean that our favorite non-IP Disney attractions might be in trouble? Is it possible that Disney parks might want to change the old favorites into IP-driven attractions? I honestly wouldn’t be that surprised if Disney went this way. Let’s just cut to the chase and give Disney some ideas as to how to convert all their non-IP attractions to IP-based rides.

Soarin’ Over the World with Aladdin and Jasmine

This one seems too easy. Instead of flying in a hang glider, you’d join Aladdin and Jasmine on their magic carpet and fly over various fairy tale-themed landscapes. Feel the salt spray as you swoop in close to Moana and Maui’s ship as they sail the wide open ocean. Travel above the swamps and come out at Tiana’s riverside restaurant and smell the mouth-watering scent of cooking gumbo. Explore London at night with Peter Pan and Tinker Bell as your guides. Come in close to a fairy tale castle as the clock chimes midnight and Cinderella loses her shoe while fleeing down the castle steps. Soar above the floating lanterns rising above Rapunzel’s kingdom at twilight.

I’m going to cheat here, Disney has already done this one themselves with Hyperspace Mountain in Disneyland. You can’t argue with results, it just works. Flying around space to the incredible strains of John Williams’ music is thrilling. All they need to do is plus it up a little bit more by putting in a few more projections. Death Star anyone? Star Wars sells, and Disney can’t have enough of it.

Splash is a bit of a conundrum. Pirates of the Caribbean underwent a recent makeover to get rid of the auction scene. I’m not going to give my opinion on that change here; that isn’t what this article is for. But if that scene went, I am very surprised that Splash remains. It is, after all, based on the movie Song of the South. If you aren’t aware of the controversies surrounding that film, a quick Google search will illuminate the issue for you.

All that aside, I believe that Splash could undergo a very successful Princess and the Frog makeover. You could start out at the New Orleans party at Charlotte’s plantation. Your log would then journey into the swamps of the bayou. After several narrow escapes from alligators and frog hunters, you’d take a leap of faith and return to the city of New Orleans, right in time for a Mardi Gras celebration at Tiana’s Place.

This will require a few tunnels. The attraction can be changed to a Wreck-It Ralph theme. You’ll start out designing your very own Sugar Rush car while in the queue, similar to Test Track, but this time you’ll be playing the actual mini games from the movie to design your car. The first half of the track you’ll be running your race, then you’ll enter a few tunnels as you jump video game worlds. The first tunnel will take you into Hero’s Duty where you’ll have to shoot a few Cy-bugs with a laser gun attached to your vehicle. The next tunnel will let you explore Ralph’s own world, where you can help him wreck it by running over certain triggers on the track. You’ll then finish up the Sugar Rush race and exit the attraction into the gift shop/arcade.

Living with the Land

This could very easily be a Wall-E-themed attraction. The boat could float through a couple of opening scenes of a ruined Earth. Then you’ll enter the greenhouse areas where you can discover the innovative ways that the Buy N Large crew is growing food and rehabilitating the planet.

It only makes sense to add Disney’s newest bird to this attraction: Heihei from Moana. Heihei just keeps popping up all over the Tiki Room and interrupting the birds’ revelries. In the end, Moana saves the day by corralling Heihei and letting the birds continue their show.

Not that it would fit into the theme of Animal Kingdom, but Everest could be turned into a Sleeping Beauty attraction. You would join Prince Phillip and his noble steed Samson in a mad dash to confront Maleficent. At the top of the mountain you would come face to face with the terrifying Maleficent in dragon form.