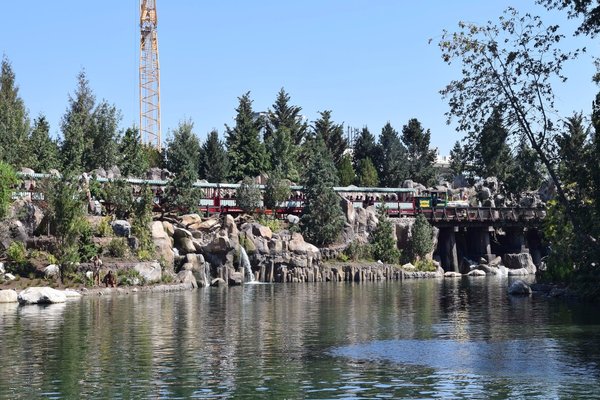 The best development at Disneyland in 2017 is the return of some old favorites.  After going down for a year and a half, the Disneyland Railroad and Rivers of America are back in action and looking better than ever.  New scenery and upgraded show scenes have brought new vitality to these Disneyland classics.

The Rivers of America closed in January, 2016 as part of the construction for the new Star Wars: Galaxy’s Edge going into Disneyland’s northwest corner.  To make way for the new land, the River was shortened with the rest of the expansion taken up by the backstage area.  The entire Galaxy’s Edge will be located outside of the original Disneyland berm with guests walking underneath the train track on their way to a galaxy far, far away. While Star Wars: Galaxy’s Edge will be nearly identical in both Disneyland and Disney’s Hollywood Studios, it was designed to blend in with Disneyland’s surroundings.  The cranes of today will soon be replaced with the mountaintops of Galaxy’s Edge.  The new rock-work will mesh well with Frontierland and create some depth. While the Railroad was down, Disney took the opportunity to also update the Grand Canyon and Primeval World dioramas.  New projections were added and there is also a new practical effect in one scene.  Without spoiling anything, it was a ‘shocking’ addition. The Disneyland Railroad is the heart of the original Magic Kingdom.  Walt Disney loved trains and the park has been missing it immensely.  The Railroad and the Rivers of America attractions are not on everyone’s must-do list; with them out of commission it has made many fans realize what they meant to the park.  Absence does make the heart grow fonder.