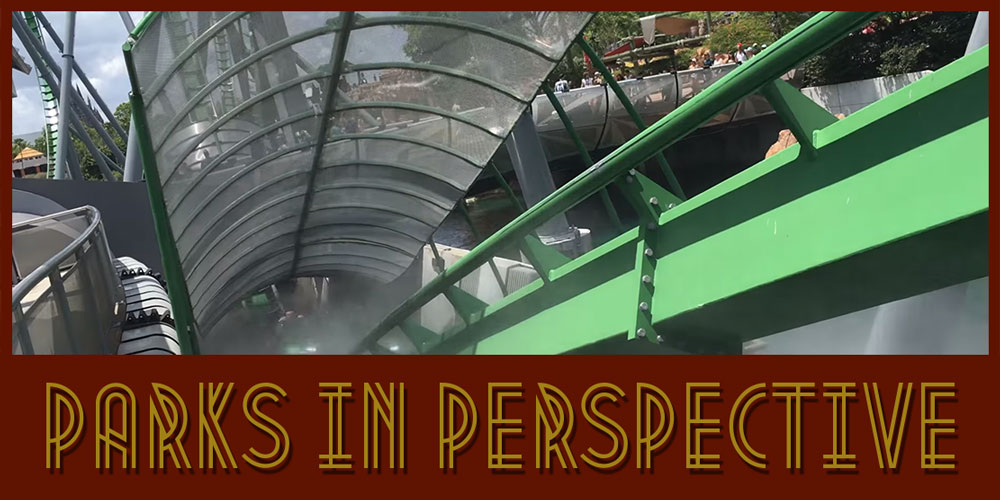 My story starts with a dark secret…

Prior to returning 15-years-later as an adult, the last time I was at the Magic Kingdom I pretended to have diarrhea to avoid Splash Mountain.

Let me set the scene: 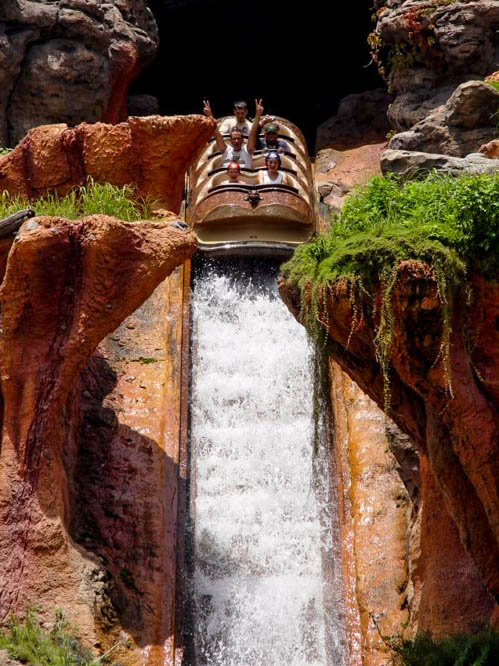 I’m 16-years old, I’ve skipped school for the day (parental permission obtained, oddly enough) with two friends and I’m headed to a theme park for the first time in my life without any semblance of adult supervision. Some of us have a hard time remembering that feeling, those first forays into unrestricted interactions with the outside world. Occasionally, thanks to a lack of emotional maturity, I’ll get a catch a glimpse of it. I’ll be standing in a long line at the airport and get a bright smile in my brain, thinking, “Well look at you, Charles. Checking luggage like a grown-up. How about that?”

Try and put yourself back there, that place hidden in the long-abandoned corners of your gray matter attic where teenage independence and cobweb-covered hormones live. Find that feeling. Still pretty great, isn’t it?

Riding that high, we experienced the Magic Kingdom to its fullest. While today I might tense up in judgement of unfiltered adolescence, when I stop and remember myself at that age my annoyance changes to nostalgia, with maybe a hint of jealousy. Somewhere, right now, groups of teenagers are harmlessly yet thoroughly enjoying acting like idiots. Good for them.

My buddy Carol drank the water on “it’s a small world” because of a Simpsons episode. When we told her that it was a terrible idea, she calmly explained that it was most likely the same liquid that runs through the water fountains. Seemed like sound logic at the time; I’ve never tried to disprove it. Someone fact-check that for me.

I purchased a plastic sword and wooden gun from Pirates of the Caribbean, as is the way of my people.

Eventually, we came to Splash Mountain. While I absolutely love heights and speed, I have a thing about drops; although I couldn’t remember how bad Splash Mountain was, it certainly didn’t look appealing. Nowadays I could have used the old “I don’t do water rides” excuse, which is valid — I am always wearing jeans, and although the Florida sun will quickly dry off most of your clothing, your underwear is just never the same.

I didn’t use that excuse though; I chose the nuclear option.

Now, I don’t know if I’ve ever been cool. Luckily, the question of my inherent coolness has not stricken me with an abundance of sleepless nights. That doesn’t mean I’ve ever actively strived for uncool, though, especially not at that age. Because, yes, embarrassment over a gross and highly uncool affliction beat admitting cowardice among my peers. So — I had diarrhea.

I had intestine-knotting, bottom-clenching, gas-coming-out-my-pores diarrhea. Lesser men would have exploded from the pressure pushing the boundaries of my bowels. At least, that’s what I claimed.

The excuse sufficed, and I miraculously “recovered” within a couple of hours. 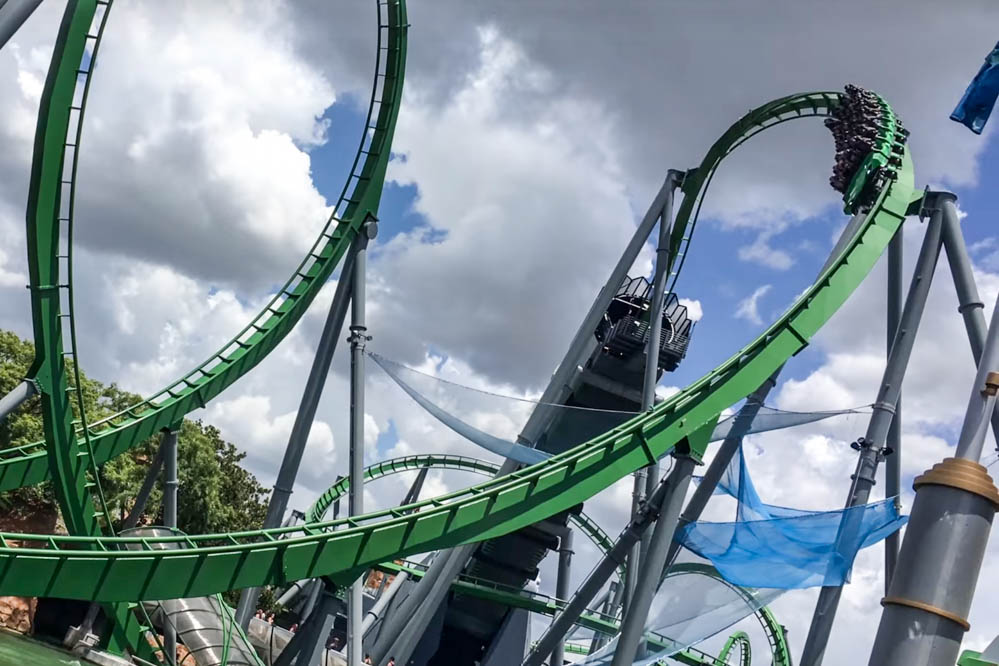 Act two of this tale sees me in a different park, with a much different mindset about how to deal with fear.

I’m 26-years-old, and I’ve been avoiding theme parks for a decade. I certainly love theming, but just the idea of being confronted with a situation where I, as a grown man, have to watch my friends get on a thrill ride while I nervously remain behind sends electric eels of anxiety swimming through my veins. Luckily, my brother explained, my friends primarily use their Universal Orlando annual passes for drinking. I don’t have to ride anything; it’s basically one giant superhero and dinosaur-themed pub crawl.

Naturally, the topic of getting on a roller coaster came up almost immediately.

“No,” I calmly expounded to my friends, “I’m totally looking forward to a ride later, but I’d rather relax and enjoy my drink for now. Just not in the mood yet. It’s certainly not the incomprehensible dread of having no control of my body as I plummet downward through the sky, becoming intimate with my own mortality as I’m locked in an extended convertible Hearse stuffed with strangers maniacally laughing. Just not in the mood yet…”

I was in the mood later though. After a dozen doses of what some folks still call “liquid courage” kicked in, I was downright adventurous.

Now, though, I was different. Now, I was brave. It only took me twelve cocktails, but I was ready to truly face my fear head-on, the way only someone with no regard for his personal safety can.

Truth be told, it was amazing. During our last hour at Islands of Adventure I rode every fast attraction I could get to. I bought an annual pass the next week, and continued the trend of in-park pub-crawling and roller coaster-riding twice a month for four years. Inebriation wasn’t a necessity, of course. I’m sure I didn’t need to hit the happy hour at every bar in the park to get up the nerve to ride. There must have been a few times I didn’t stop for a cocktail before hopping on The Incredible Hulk. Probably. I just can’t seem to remember… 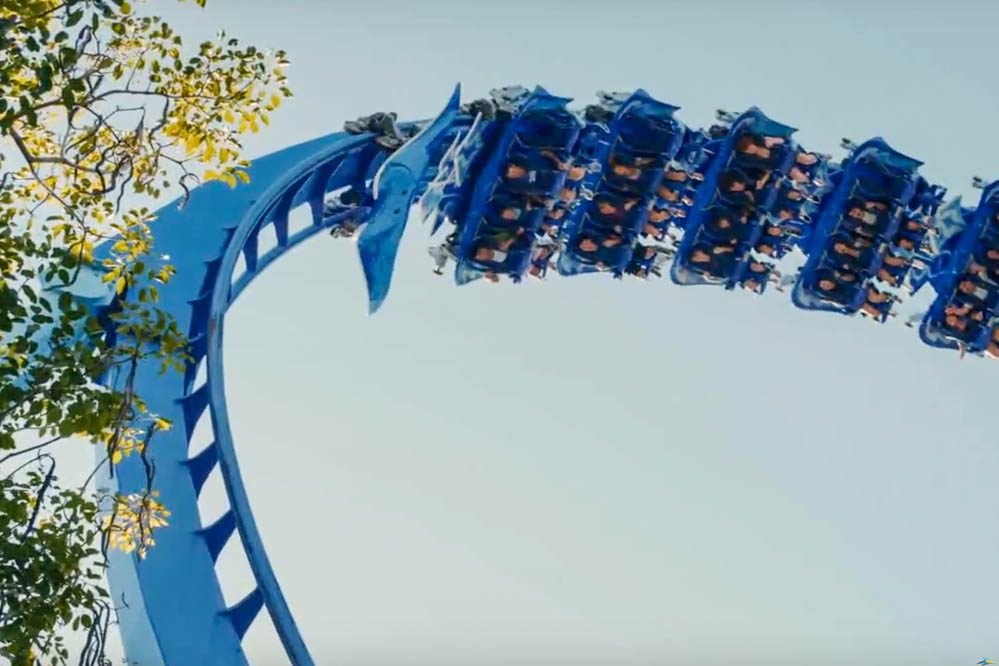 Almost a full score of years after my diarrhea deceit, I find myself at our story’s third park, and yet another place in my life.

I can already feel my heart frantically searching for a new apartment outside of my chest as I drive towards SeaWorld with Steve Porter, his amazing fiancé Makayla — currently amazing wife and Dreams Unlimited Travel* Agent ([email protected])— and a couple of friends.

I remind myself that I’m tough. I’ve been places, I’ve seen things. I’ve laid brick, worked a jackhammer, bounced at a bar, and never backed down from a scrap. My manly card has plenty of punches.

If that’s the case, then why do I get nervous before roller coasters that ten-year-olds tackle with ease. I’m no longer inclined toward intoxication, so all of these pre-coaster insecurities are felt full force. Each doubt quickly primed, loaded, and fired straight at my ego, adding onto the last in a repetitive barrage of smoke and musket-fire until the space between my ears becomes the Boston Massacre of fragile self-image.

Then I remember something important: I’m not important. None of the people with me, none of the SeaWorld employees, no future employers or potential girlfriends, will care even the slightest bit about if I ride a roller coaster or not. No one will be disappointed if I don’t, and certainly no one will be impressed if I do. I was at a theme park, and those trade exclusively on giving people multiple options for enjoyment and catering to all types. I didn’t have to ride anything.

So, I rode everything. Why? Because I really enjoy roller coasters. Sometimes.

I’ve always had a habit of letting fear get in the way of doing the things that I want to, or letting insecurity force me to do the things I don’t. I’m not always in the mood for a thrill ride, but sometimes I like to push myself a bit. Sometimes, I like to eat a chili dog and relax. I’m a complicated guy.

It took me longer than most, maybe, but I’ve realized that part of being an adult is understanding what you want, why you want it, and then using that information in a manner that you can live with. Some days I crave a bit of excitement, but most days I’m not up for the anxiety. Roller coasters are a bigger process for me than most. The important thing is, if I don’t have the urge to thrill-seek on any given day I no longer feel ashamed. It isn’t about ego; it’s about knowing what I want, being confident in that, and making sure my decision isn’t guided solely by fear.

I used to lie to cover it up, I used to avoid it, I used to drink it away, but now I try to accept my fear shamelessly and work with it. As you can guess, this doesn’t apply exclusively to thrill rides or theme parks.

The reasons human beings feel fear is as diverse as every shade and every tint of all the colors in all of the spectrums, and just like those beams of light, there are some we can’t perceive. The fear I have of car accidents or house fires are all clearly visible scarlets and crimsons, but why I fear clowns or roller coasters are imperceptible ultra-violets and infra-reds. Wavelengths of worry that I’ll probably never truly understand. The important thing is, I don’t ever need to.

I know they’re safe, but I’m still afraid of certain roller coasters — I don’t know why. Ask me to ride one with you. Maybe I’ll say yes, maybe I’ll say no. Maybe I’m in the mood to push past that fear to adventure, or maybe I’ll relax, safe in the knowledge that I have nothing to prove. Either way, I’ll enjoy my decision.

Lastly, I’ll say this: If you are a parent with a little one, or big one, who doesn’t want to get on that ride with you, ask yourself a question. Are you forcing them to ride it because you are teaching them to overcome their fears, or are you using that as an excuse to not have to sit this one out and wait with them? Be honest with yourself, they deserve nothing less.

Overcoming fear requires action on our part. Someone forcing us to do something terrifying doesn’t prove anything beyond how powerless we are, especially if it is in front of a crowd of strangers hearing our cries or seeing our worry yet doing nothing to help. When we get old enough to make our own decisions, to push through our own issues and come out the other side, that is when the benefits of bravery become clear. Doing something scary against our will can have the opposite effect, reinforcing those fears instead of diminishing them.

If your child is scared, but wants to ride that attraction anyway, show them how proud you are. If they are absolutely terrified and want to sit this one out, dragging them onto that ride only proves that their fears are less important than the family’s convenience. Maybe they don’t enjoy the same experiences that you do. That’s okay — after all, they aren’t you. They are their own person, still figuring things out, and that should be respected and nurtured.

Just something to think about.

*Dreams Unlimited Travel is the official sponsor of The DIS