So you’re going to Disneyland!  One of the big decisions to be made is, of course, where to stay.  If you’re used to Walt Disney World, you will find similarities and differences among the choices.  One difference is that the Disneyland Resort has dozens of hotels within walking distance.  Most of those, however, are what Disney refers to as “Good Neighbor” hotels; they are approved by Disney and have some limited park benefits, but they’re not officially Disney.  Here are just a few things to consider before you choose between these categories:

A general idea of where the hotels of the Disneyland Resort are located.

If you decide on a Good Neighbor or non-affiliated hotel, you’ll need to do your research since there are approximately 40 “Good Neighbor” hotels and more than 300 hotels in greater Anaheim.  Some are excellent and budget-friendly choices.

In my opinion, there is a time to stay at each of them, depending on what you want.  All three have things to offer, so to help you decide I have ranked the three hotels as I see them in ten different areas.  Of course your opinion may vary, but hopefully this gives you some things to think about!

If your primary concern is price, you can stop here.  The Paradise Pier hotel is the least expensive of the three, and often by 30% or more.  On the top end, a suite at the Grand goes for $1200 or more per night.  Of course prices vary by season, days of the week, and occasionally special offers. If you have serious cash, the Grand Villa at the Grand Californian could be yours.

The original DLH opened in 1955, so Walt actually walked there.  Of course it didn’t look much like it does now, but the most recent refurbishment took the hotel back to its roots, and there are tons of beautiful historical pictures and artifacts throughout all the buildings.  To me, this hotel feels the most “Disney” of any hotel on any Disney property. 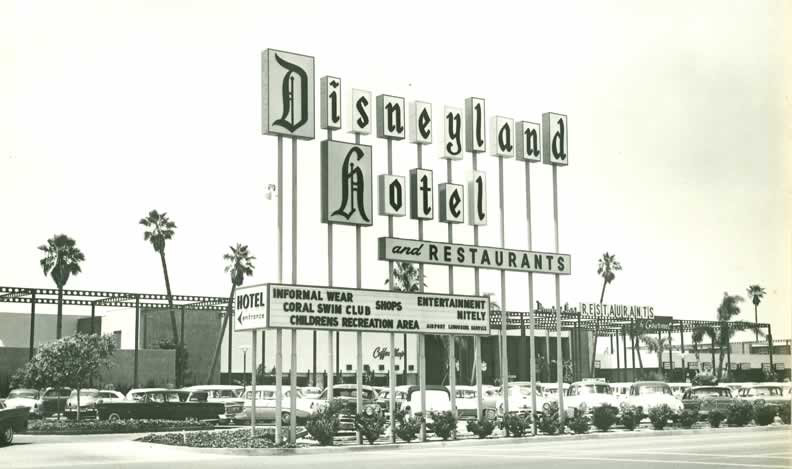 The Disneyland Hotel way back when…

In second place, the Grand — although actually the newest of the three —  feels more like a traditional Disney property than the Paradise Pier.

The Paradise Pier wasn’t actually built as a Disneyland Hotel; Disney purchased what was then called the Pan Pacific Hotel from a Japanese company in 1995.  So, while it has been retrofitted more to Disney’s liking, it’s not traditionally so and thus lacks historical significance.

As the “Grand Californian” says in its name, it’s grand.  Expansive lobby, elegant decor, sophisticated atmosphere (including a pianist and giant fireplace) and beautiful guestrooms.  I’ve been told by people in the know that those comfy chairs in the lobby can also make for a nice nap escape from the parks on a hot day. The Disneyland Hotel has some luxurious spots, but overall it feels much more casual.  It is also spread out in three different towers, and several smaller buildings, so its lobby is more of a check-in area than a focal point.  It would still definitely qualify as a “Deluxe” resort by WDW standards, but it has a more laid back atmosphere.

The Paradise Pier probably would be more comparable to a “moderate” at WDW and doesn’t have the upscale touches of the other two.

All three hotels boast great (if occasionally inconsistent) Disney service.  In my experience the Grand has been the most inconsistent — I have had both wonderful and not-so-great service there.  The other two have been more consistently good.  The Grand seems to have a larger staff and most of them go that extra mile, but it’s not a clear-cut winner.  During my last stay at the Paradise Pier the service was exceptional.  I’m calling this one a tie. Goofy keeps an eye on the service in the lobby of the Paradise Pier Hotel.

Both the Disneyland Hotel and the Grand have amazing themed pool complexes with multiple options.  The Disneyland Hotel has more child- and family- friendly choices including a “monorail slide,” smaller slides, and a play area for the little ones; but the Grand also has a water slide and plenty of places to relax.  Both also have hot tubs, drink and snack service or walk-up options, and cabanas for rent. Nighttime at the beautiful pool complex at the Disneyland Hotel

The pool at the Paradise Pier gets points for effort and for being on the ‘roof’ of the hotel, but it’s basically a huge rectangle with a water slide and small hot tub added later to improve its appeal.  It has a small beverage & snack bar with limited options.  If time at the pool is your priority, this one’s a bit of a let-down. The only so-so pool of the Paradise Pier

When I’m forking over the cash to stay at a Disney hotel, I want “In-your-face” Disney.  For some this is a downside.  If you have a less-than-enthusiastic Disney fan in the family, you may want to go for something less obvious. One of the amazing collages in the Disneyland Hotel

In addition to all its historical references, the Disneyland Hotel leaves no doubt that you are at the Happiest Place on Earth.  From the teacup chairs in the lobby to the Mickey fixtures in the rooms, not much is subtle (although all is well done, in my opinion). The Paradise Pier has more of a cartoon-style Disney feel with a beachy theme.  There are giant figurines of characters around, and the rooms have California surfer style. A standard room at the Paradise Pier Hotel feels both Disney and beachy.

At the Grand, you have to look a little closer to know where you are.  If you’re hoping to escape the in-your-face-Disney, this is the best choice.  This hotel also has large meeting and convention facilities which means plenty of guests aren’t tourists.

This one is a close call between the first two.  The Grand has the award-winning Napa Rose restaurant, which is first class.  It also has Storyteller’s Cafe (buffet or a la carte), two lounges, and a hidden gem — Whitewater Snacks — serving up a limited but yummy selection near the pool. The Disneyland Hotel has its own award-winning fare at Steakhouse 55.  It also has Trader Sam’s Enchanted Tiki Bar which is a destination of its own.  In addition, Goofy’s Kitchen has fun (if noisy — see below) character dining.  You will also find the more casual Tangaroa Terrace (counter service) and a coffee house here. Trader Sam’s Enchanted Tiki Bar at the Disneyland Hotel is not to be missed.

The Paradise Pier has a nice (if unremarkable) option in the form of the PCH Grill, but other than that it includes only the small “Surfside Lounge” and a poolside snack / beverage bar. Get your picture with Mickey at PCH Grill character breakfast.

Walking distance to the Parks

The Grand is actually inside Disney’s California Adventure and it has its own back entrance to that park.  If you go out the other side of the hotel, you’ll be in the middle of Downtown Disney and a fairly short walk from Disneyland.  While the monorail goes right through the Grand, it doesn’t stop there, so don’t be fooled.  If you’re looking for proximity, though, this is your place.

The Paradise Pier Hotel is actually just across the street from the Grand and, somewhat surprisingly to me, a shorter walk than the Disneyland Hotel (which is at the far end of Downtown Disney).  While you do have to go across an intersection to get to the parks, it’s beautifully landscaped, well-lit, and monitored by cast members so it still feels very “on-property” most of the time.

The Disneyland Hotel is the longest walk of the three, about a half a mile to the entrances of the parks.  However (and it’s a big however), the walk is a fun and often entertaining one right through Downtown Disney.  In addition, there’s a shortcut — this hotel is very close to the only monorail stop outside the parks, so you can hop on board and be there in a snap.   A couple of things to watch out for, though — first, the only other place you can get off the monorail is in Disneyland’s Tomorrowland.  So if you’re looking to go to the front of Disneyland or to DCA, you won’t save many steps by taking the monorail.  At night the monorail lines can be very long, so if you’re not in the mood to wait (or are already at the main entrance), you may end up walking anyhow.

The Disneyland Hotel actually has two shops — the smaller one has souvenirs, snacks, and supplies you might have forgotten at home.  The other is a large store stocked with a huge variety of most everything; toys, clothes, watches, beach towels, etc. The larger of the two shops at the Disneyland Hotel

The Grand and Paradise Pier have one shop each, and both have some unique options, but they’re not as large.  The shop at the Grand does have a larger selection of more expensive items as well as hotel-specific options.  There are snacks and sundries at both, but a smaller variety of toys and souvenirs. Here are a few of the resort-specific items for sale at the Grand Californian.

Goofy’s Kitchen at the DLH is the original character breakfast.  It’s noisy and chaotic and has tons of food choices (healthy and not — I mean Goofy does the cooking, after all!).  Goofy is always here in his chef hat; other characters vary.  If you’re looking to make a kid’s day (at least until the stomach ache kicks in), this is the place. Goofy’s Kitchen is a kid’s paradise.

The Surf’s Up restaurant at the Paradise Pier is a great option as well.  It doesn’t have as many food choices, but it does have Mickey in his surfing gear.  It’s also a little more off the beaten path so usually less crowded and noisy than Goofy’s.

The Grand Californian offers the Chip & Dale breakfast buffet at the Storyteller’s Cafe.  It is much more laid back than the other two and has a variety of outdoorsy creatures including characters from Pocahontas.   I put it last only because many of the characters aren’t well known so you’re paying character meal prices for often unfamiliar characters.  Unless you are crazy about chipmunks, of course! An “outdoorsy” breakfast at the Storyteller’s Cafe

So weigh your options — which of these criteria are the most important for your next trip?  Which of Disneyland’s three hotels will be your choice?