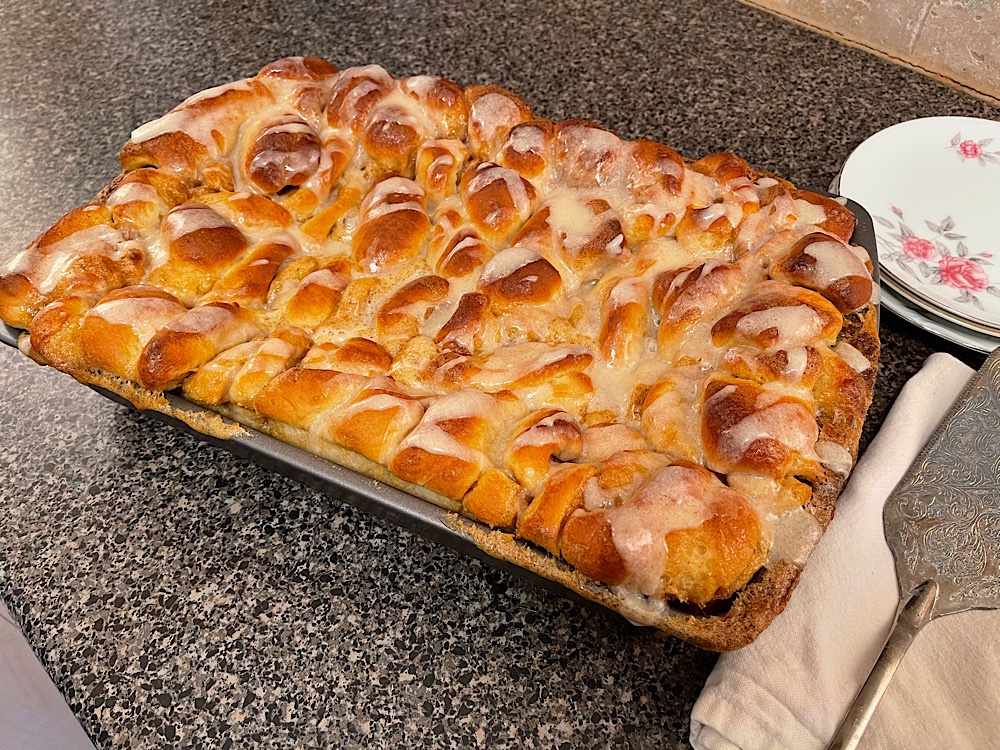 I’ve been asked in the past about my favorite Saturday Snacks recipes, and while I would have a tough time choosing just one, I must say that it’s quite easy to come with my top 5. This week’s snack? Well, it decided to blow my choices out of the water. It is easily one of the very best recipes that you and I have had the opportunity to make in these almost 2 years. The Disney chefs went and broke the mold with this one. And we’re the ones who get to reap the benefits.

In the before times, the Land pavilion’s Garden Grill Restaurant would offer breakfast, lunch, and dinner. Currently, the offerings are limited to lunch and dinner, which means that by making one of their breakfast treats for today’s Saturday Snacks, we’re working a bit of Disney magic that even the chefs in the kitchen at Garden Grill can’t. Today, we will make their over-the-top Chip ‘n’ Dale’s Sticky Bun Bake.

When you try to wrap your brain around what exactly today’s snack is, think cinnamon rolls on steroids. And caffeine. When Garden Grill is serving breakfast, the Sticky Bun Bake is served in a 12-inch round cake pan; the at-home version of the recipe says that we can make it in either a 12-inch cake pan or 9 x 13 rectangular pan. My cake pans aren’t quite 12 inches, so I opted for my 9 x 13 cake pan. And to be honest, I wouldn’t have wanted to use anything smaller.

Just in case you’re starting to put two and two together and realize that you and I are about to make dough from scratch, please hear me when I tell you that it’s going to be okay. This is an easy dough to throw together, and the required rising time for the dough really isn’t that long at all. We’ve got this. I promise.

The ingredients list is simple, with a few packets of dry yeast and a package of bread flour being the most exotic. You’ll need 3 tablespoons of yeast, so make sure that you have enough on hand. I initially didn’t, but was so glad to have a not-too-recently expired extra packet or two in the pantry. I hoped and prayed that it would still work, and spoiler alert, it did. Whew.

Our initial step is to create the cinnamon smear that will cover the inside of the sticky buns. Toss 1 `1/2 cups of softened margarine, 2 teaspoons of cinnamon, and 2 1/4 cups of brown sugar into the bowl of your stand mixer (or use a large bowl and a hand mixer).

Turn on your mixer to medium-high to get those ingredients on their way to being creamed. You’ll want them to turn lighter in color and fluffier in texture. Once the ingredients are creamed, you can add each egg, one at a time. Be sure to scrape down the bowl after the addition of each egg.

Once everything was combined, I transferred the smear to a small bowl and popped it into the fridge to chill. After I tasted it for myself, of course. Yummm.

I next needed to tackle the sweet cinnamon dough. I grabbed a small sauce pan out of the cabinet and poured in 1 cup of milk.

I brought it up to 90 or so degrees over a fairly low heat. Once the milk got up to temp, I pulled the sauce pan off of the heat and added the 3 tablespoons of yeast. I whisked the yeast, prayed that it would work, and set it aside.

I washed my stand mixer bowl and attachment and tossed in a 1/4 cup of sugar, 1/2 cup of softened butter, a pinch of salt, a teaspoon of cinnamon, 3 cups of bread flour, and 2 room temperature eggs.

I turned the mixer on and tried to get things as combined as they could.

I next very gently poured the yeast/milk mixture into the stand mixer bowl.

It became apparent very quickly that I would need to continue combining the dough by hand. I grabbed my best wooden spoon and got to work. It took a little bit of elbow grease, but the dough came together and pulled away from the side of the bowl like the recipe said it would.

Here’s where you and I get to have a little workout before we scarf down a ton of wonderful sticky buns. We’re to now lightly flour a surface and knead the dough for 5 to 10 minutes. I initially thought that I would just stick with 5 minutes, but when I got going, I decided to go ahead and do all that I could to get that yeast to do its thing. I kneaded the dough for the full 10 minutes.

The recipe now asks for us to put the kneaded dough into a bowl, cover it with plastic wrap, and let it rise for 10 minutes. It didn’t say whether or not to grease the bowl like we’ve had to do in the past, but I went ahead and gave my bowl a quick round of nonstick spray just in case. I covered it with plastic wrap, put a kitchen towel on top of it, and put it in a slightly sunny and warm spot on my counter.

While we wait for the dough to rise, we can coat the bottom and sides of the pan that we’re using with butter.

The recipe says that our dough should double in size in 10 minutes. When I peeked after five or so minutes, it was happening. And I was so excited. After 10 minutes, that dough looked amazing.

We’re to give it a punch (one of the most enjoyable parts of making homemade dough if you ask me), knead it for a couple of minutes on a lightly floured surface, and roll it out to 15 x 10 inches.

That cinnamon smear that you and I made earlier? While we’ve been busy putting the dough together, it’s been turning into something magical in the fridge. Grab that bowl out of the refrigerator and spread that stuff all over the surface of your 15 x 10 rectangle of dough. And just in case you get to wondering if you should really use all of that smear, yes. You should. Spread and spread and spread some more until the entire thing is smothered in a thick layer of that cinnamon-y goodness.

My next step was to roll the dough starting with one of the 15-inch sides. I gently peeled it up from the counter and rolled the dough with the seam side ultimately being down.

We’re now to cut 1-inch slices of that amazing cinnamon roll-to-be, and then quarter each 1-inch slice. It’s going to feel weird cutting them into quarters, but just trust me. The Disney chefs know what they’re doing here.

It’s now time to load those quartered slices into your buttered pan. The recipe asks that we place each piece close to the next one, and to be honest, I couldn’t help but cram them all in together. I almost didn’t think they would fit. But I made it work, of course.

Our cinnamon rolls now need to rise just a bit. Cover the pan with plastic wrap or a kitchen towel or whatever you have, stick it in a warm spot, and set your timer for 45 minutes. And maybe clean up that lightly floured counter. Or brew a pot of coffee. Or both.

Uncover your dough once the 45 minutes is up and place the pan into a 350° oven. We’re to let it bake for 30 minutes or until golden brown, which for me was only about 25 minutes in total.

While the Sticky Bun Bake is in the oven, you and I get to throw together the icing that will grace the top of the whole shebang. I put 1 teaspoon of milk, 1 1/2 cups of confectioner’s sugar, 4 tablespoons of softened butter, and 1 teaspoon of vanilla extract into a medium-sized bowl and gave it a whisk.

I quickly gave up on my whisk, added more milk because the icing was not doing what it was supposed to, grabbed a large spoon, and stirred and stirred until the icing came together.

If you need to add additional milk, too, don’t worry. A little extra milk will allow things to come together nicely. You’re going to want that icing to be able to drizzle over the top of your hot Sticky Bun Bake, so make sure it’s the consistency that you want it to be.

When I peeked in the oven after 25 minutes, I was excited. This beautiful golden brown, completely over-the-top cinnamon roll extravaganza sat there looking back at me, and I just couldn’t wait to eat it.

Remember how I said I wasn’t sure if the pan was going to be able to fit all of the cinnamon roll quarters? Well, during baking, one of them decided to jump out of the pan and bring some of that smear with it. It was resting, completely burnt, at the bottom of my oven. And now I need to clean my oven. A small sacrifice.

I pulled the Sticky Bun Bake out and proceeded to drizzle it with the sugary icing. I scooped myself a large portion, and took my first bite. Friends, this was an amazing I can’t believe I did this moment right there in my kitchen. This dish blows others out of the water. There are cinnamon rolls, and then there is this glorious cinnamon monstrosity.

My husband came home from work not too long after the bake came out of the oven and declared it to be one of the best things he thinks I’ve ever made. That’s high praise, friends.

The chefs at Garden Grill? Geniuses. Every single one. All in all, this amazing breakfast/dessert/snack was easy to put together and HUGE in the payoff department. Words fail to describe how unbelievably good this thing is. Thank you, Disney chefs.

Toasty sweet dough combines with sweet cinnamon smear, all topped with sugary glaze. This will impress anyone you place it in front of. Have a brunch or shower or card game coming up? Make this. Please. Your friends will lose their ever-loving minds.

I’m hoping that breakfast service returns to Garden Grill in the near future. I’d like to make a reservation as soon as it does and try the Sticky Bun Bake straight from the source. In the meantime, you and I can enjoy its gooey goodness in the comfort of our own kitchens.

This Saturday Snacks recipe is now securely placed in my top three. I’m not sure anything could ever bump it from its position, but you never know. Those Disney chefs are really good at what they do.

Thank you so much for stopping by and reading today. And for the love of all things sweet, make Chip ‘n’ Dale’s Sticky Bun Bake. And please let me know what you think after you do.

Have a great weekend, friends. Many thanks and much love.

Ready to try your hand at making the Sticky Bun Bake? You’ve got this. The recipe is below: