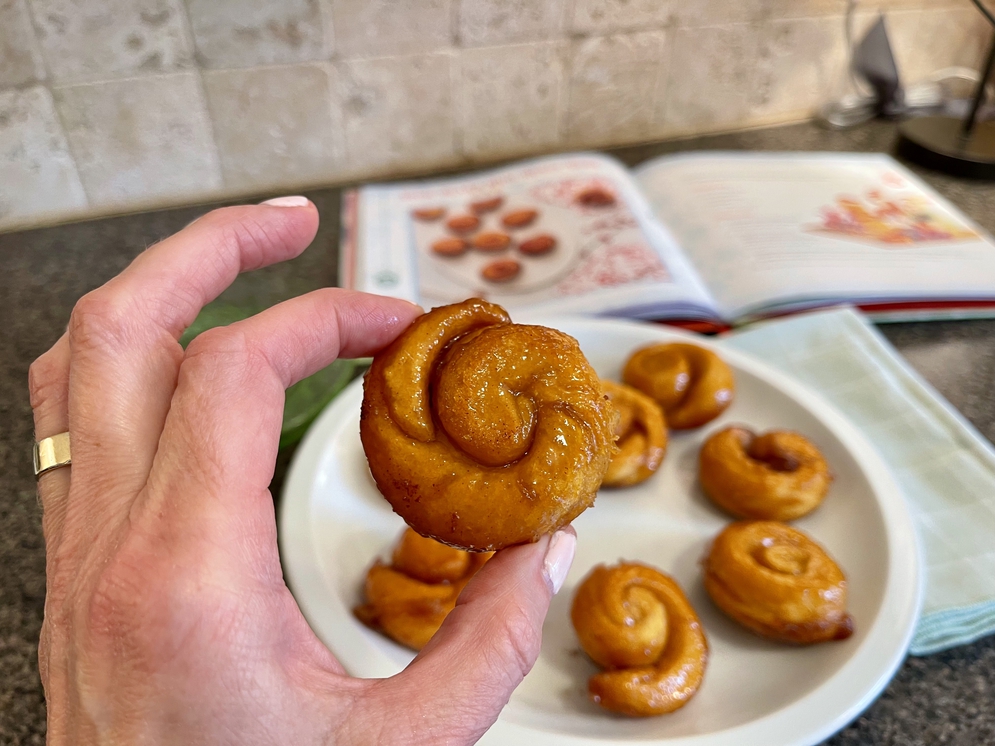 Today is a day to celebrate. First of all, I’ll be whipping up a delicious and sweet treat from a new-to-me cookbook. Yes, granted, it’s a Disney Christmas cookbook for kids, but a great sweet snack can’t just be confined to one season of the calendar year, right? Secondly, today’s my birthday. And since it’s my birthday, I’m going to deem that we can make Christmas treats any time of the year, thankyouverymuch.

If you have something to celebrate in the days ahead (Father’s Day, the start of summer, or a random Tuesday afternoon), this recipe will fulfill your need for a great snack. And, if you have kids in your kitchen, this recipe will be right up your alley. It’s completely kid-friendly.

Today’s cookbook is entitled A Merry Christmas Cookbook and is filled with simple, Disney character-inspired, Christmas adjacent recipes. And while the recipe for Pooh Bear’s Mini Honey Buns is the first one I’ve made for Saturday Snacks from the cookbook, I’m fairly assured that won’t be my last.

When my youngest was 12 years old, I got the wild hair one day that the two of us should make Emeril’s recipe for cinnamon rolls. My kiddo was down for the adventure, and we began to gather the ingredients and tackle the first part of the recipe. Long story short, we had cinnamon rolls approximately eight hours later. Little did I know when I started the recipe in the bright promising light of morning that we’d be pushing up against dinner time before we ever sunk our teeth into those rolls. The dough needed to rise (twice, if I remember correctly), and the whole thing just took so long that you might not want to eat those things (or even look at them, for that matter) once they’re done. That being said, it was fun getting to walk through the process of making them with my then-middle schooler.

If you’re looking for some good quality time in the kitchen with your kid (or all on your own), but don’t feel like trudging through an eight hour prolonged escapade, Pooh Bear and his miniature honey buns are here to meet your needs. While they’re more honey than cinnamon, they will surely satisfy any sweet tooth that you’ve got. And they’ll take you approximately 30 minutes to prep and bake. Now that, as dear Martha Stewart would say, is a good thing.

Our ingredient list today is sweet (pun intended) and simple. I needed only one ingredient from the store: a can of biscuits that cost ALL OF FORTY-EIGHT CENTS. Happy birthday to me! If you don’t have a bottle of honey on hand, you’ll want to grab one at the store to go along with the biscuits.

First things first: let’s preheat the oven to 350 degrees and grab a small bowl out of the cabinet. Toss two tablespoons of brown sugar and one teaspoon of cinnamon into that small bowl and use a fork to give things a stir. If you’re like me, you’ll also have a few chunks of brown sugar that don’t want to combine with the cinnamon no matter how hard to try to crunch them up. Remind them who’s boss and get things as mixed as possible.

Pull a muffin pan out of the cabinet and divide half of the butter and sugar mixture into ten (or however many biscuits you have) of the muffin cups. You’ll want a little pool of the sweet, sticky stuff hanging out in the bottom of those cups.

It’s now time to pop open that can of biscuits and roll each biscuit into a rope. Once you have each biscuit looking like a rope, roll it into a coil. The recipe said to pinch both ends of the rope so that the honey bun doesn’t unravel during the baking process. Spoiler alert: even if you follow the directions like the good baker you are and pinch those ends just as instructed, they still might unravel. But fear not; in the end, those honey buns are going to be a-okay. You won’t mind those unraveled ends one bit. Deep, cleansing breath.

Place one of the coiled biscuits into each muffin cup (they get to take a honey/sugar bath), and top each biscuit with the remainder of the honey and sugar mixture.

Top each of the honey buns with a generous sprinkling of the brown sugar/cinnamon mixture. Yummm.

Pop that muffin pan into the oven and set the timer for twelve minutes. My honey buns weren’t quite done at twelve minutes, so I gave them an additional three.

At just shy of twelve minutes, the amazing scent of sugar and cinnamon began wafting through my kitchen. It was one of those moments when you absolutely have to stop what you’re doing and take a very deep breath. It was delightful, and yes, it definitely smelled just like Christmas in my kitchen in the middle of June. And, again, it was a very good thing.

The buns took a total of 15 minutes, and emerged from the oven looking quite yummy. The recipe asks that we allow the honey buns to cool completely before shoving them into our faces, and while I normally wouldn’t wait until they were cool to try them, I had to leave to head to the dentist for a permanent crown. Again, happy birthday to me. Sigh. So the honey buns would indeed cool completely before I sampled them.

When I returned from the dentist, the honey buns were definitely completely cool. And they weren’t coming out of the pan. Not cool, honey buns. I grabbed a steak knife and ran it around each cup to help release the buns. Thankfully, I was ultimately able to pry each of the ten buns from the pan, but, unfortunately, some of the honey/butter/sugar goodness remained in each cup. Next time, we’re grabbing those honey buns out of the muffin cups before they cool so that the topping is just a bit more liquified.

Friends, these little Pooh Bear-inspired mini honey buns are delightful. Due to their size, they’re also quite poppable. You might just gobble up three of them before you know it. I speak from personal experience.

The honey buns are super sweet, and while they feature cinnamon, they lead with the honey. If you’re like Pooh Bear and love all things honey, these snacks will be right up your alley.

If I make the recipe again, I might just get a can of the larger Grands biscuits and use a jumbo-sized muffin pan. A bigger biscuit will produce a bigger honey bun, and that sounds like a yummy proposition to me.

What sweet or savory Disney-inspired treats have you made in your kitchen recently? Please let me know in the comments section. And if you give the honey buns a whirl, please let me know your thoughts below!

Friends, whatever you’re celebrating this weekend, I hope that it’s a great one. And, of course, I hope that your celebration includes something incredibly delicious. You deserve it. 🎉

Ready for a bit of sticky and sweet goodness à la Pooh Bear? The recipe is below: