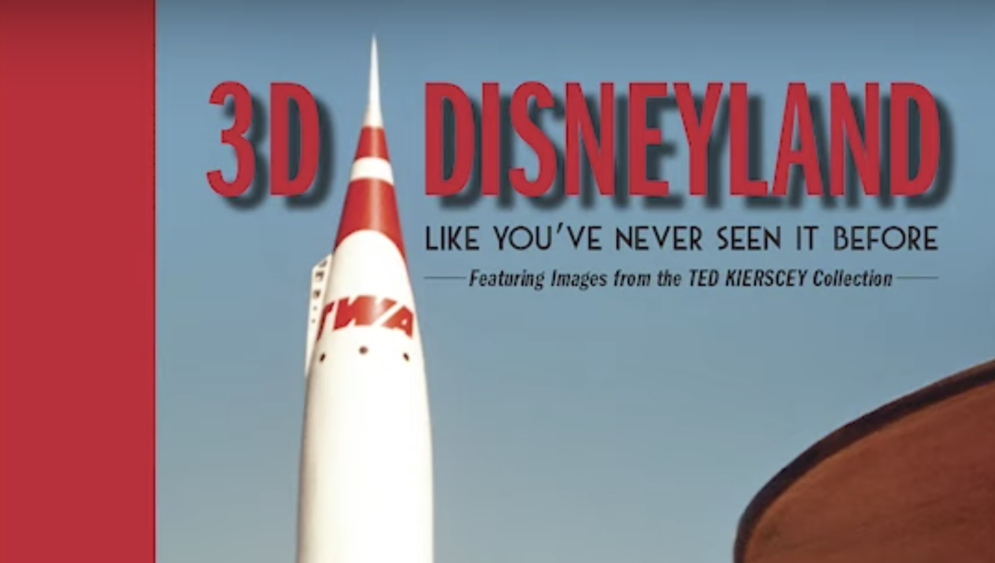 This coffee table book is really unique. It is unlike any other book written about Disneyland or any Disney theme park. This 200-page book mostly consists of photographs taken by Ted Kierscey.

In 1964, Kierscey won a scholarship to the Chouinard Art Institute, which was presented to him by Walt Disney himself. After serving his country in the Navy, Kierscey was eventually able to take advantage of his scholarship. In 1970, he graduated from Chouinard, was honorably discharged from the Navy, and then was hired by The Walt Disney Studios.

Kierscey started in the animation department and quickly rose through the ranks to become a special effects animator. He worked on a number of major Disney animated films including The Rescuers, Beauty and the Beast, and The Lion King.

One of Kierscey’s hobbies, since 1955, was taking 3D photographs. One of his favorite places to take those photographs was at the Disneyland theme park.

Bossert said he got to know Kierscey when they shared an office as they worked on various Disney animated features.

Bossert was first introduced to Kierscey’s 3D photos of Disneyland when he brought them in one day and showed them to him and other animators in a conference room.

“He shot the photographs when visiting Disneyland in 1980 during the 25th anniversary of the park and had others from shortly after the park opened in 1955 through 1958,” said Bossert. “Kierscey told stories as he showed slides of attractions that no longer existed.”

The next day Bossert told him that he should publish them in a book. The two men remained friends after their retirements from Disney. Fast forward 25 years later, they were again talking about the Disneyland 3D photos, and Bossert, once again, suggested putting them into a book. This time, Kierscey agreed.

One day Bossert was on a podcast talking about one of his other books (he has written seven others on Disney) when a listener, Patrick Swinnea, heard him talking about working on a book based on the 3D photos. Swinnea got in touch with Bossert and offered to convert Kierscey’s photos into anaglyph images needed for the book. Swinnea was also an accomplished 3D photographer.

Bossert, Kierscey, Swinnea, and others have produced a gorgeous book that will never sit on a bookshelf. 3D glasses, which are included with the book, have one red lens and one blue lens – the kind that were popular in the 50’s.

3D Disneyland: Like You’ve Never Seen It Before could not have come out at a better time. The global novel coronavirus pandemic has greatly reduced travel and has kept the Disneyland theme park shuttered to guests since March. Given the spike in new cases, and California becoming the new epicenter in the United States, it will be well into 2021 before any restrictions are lifted.

In the meantime, Disney fans can still experience the park though this book. Although not the same, each of the 3D photos – mostly from 1955 and 1980 – transports the viewer “right in the middle of Main Street U.S.A.” or any other area.

When looking at each of the images, it appears as if viewers are looking though a window. That is because the images were processed to optimize how they are seen.

“Each photograph is presented on its own page ‘floated’ within the white space to create a ‘windowing’ effect,” wrote Bossert. This allows for “the best three-dimensional viewing of the images.” A short description of the image is presented on the opposite page.

“It’s always a treat when never-before-seen photographs of Disneyland surface for eager Disneyland fans and historians to enjoy,” wrote former Disney Imagineer Tom K. Morris in the book’s forward. “But it’s even more exciting when those photographs are in 3-D! …This is a book to be experienced.”

3D Disneyland: Like You’ve Never Seen It Before is available at The Old Mill Press website, as well as on Amazon, Barnes and Noble, and Books A Million’s websites.

Want to hear more from the author about this amazing book? You can watch Michael Bowling and Craig Williams’ conversation with Dave Bossert for the Connecting with Walt podcast below: