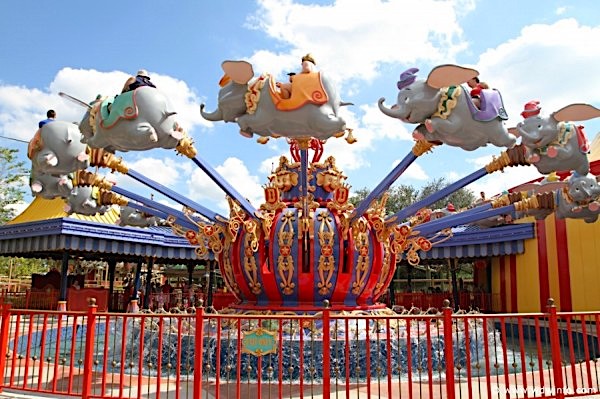 In today’s A Brief History of Disney, we are taking a closer look at one of the few attractions that have made its way into all six of the Disney parks around the globe; Dumbo the Flying Elephant. Based on the 1941 film Dumbo, the similarly themed attraction opened in Disneyland in 1955, in Walt Disney World’s Magic Kingdom in 1971, in Tokyo Disneyland in 1983, in Disneyland Paris in 1992, in Hong Kong Disneyland in 2005, and Shanghai Disneyland in 2016. Let’s start at the beginning.

The original design of Disneyland’s Dumbo attraction didn’t include Dumbo; instead, the ten ride vehicles were intended to be the trippy pink elephants featured in the film. Said to have been concerned they were encouraging kids to drink alcohol, Walt Disney changed his mind about the pink characters.

Flawed prototypes delayed the ride’s opening, which celebrated its unveiling a month after the park opened its gates. Even then, it wasn’t in its best condition. Each Dumbo had hinged ears that were supposed to be able to flap, though they didn’t function as expected and were later removed. In the mid-sixties, new Dumbo ride vehicles were installed with fixed ears, and changes were made to the eyes.

Over the decades, the Dumbo attraction had many refurbishments and upgrades. The first of which was a redesign in the 1970s dubbed “Dumbo’s Circusland” that was canceled shortly after being displayed in “Disneyland Presents a Preview of Coming Attractions.” Elements of the Disneyland remodel were said to be repurposed on the east coast, where Magic Kingdom opened its own version of the ride. Remarkably the elephants in Walt Disney World were not initially wearing hats, an oversight that was soon corrected just a year later to match the original Disneyland style.

Most of the changes that followed in Disneyland were relatively minor until the whole attraction was relocated in 1983 further into Fantasyland, which inspired a significant redesign. In the 1990s, elephants with brand-new colored attire were added.

Over in Magic Kingdom, the same decade saw a new ride mechanism that included 16 new ride vehicles debuting. However, the attraction still lacked the central water feature that remained in Disneyland, Disneyland Paris, which opened at a similar time, and Hong Kong Disneyland, which opened later in 2005.

Most recently, Walt Disney World fans might remember the changes made to the attraction as part of the New Fantasyland project, which included a complete restyling of the area and added more experiences. The Dumbo ride was installed as the feature attraction in Storybook Circus, featuring two carousels of flying elephants and an impressive interactive play area in place of a traditional queuing system. The new land opening in stages, though specifically, Dumbo partially opened to fans in 2012 and finally displayed the coveted water features.

What version of Dumbo the Flying Elephant did you first experience, and in which park? You can probably guess that for me, it was Disneyland in the late 80s’ that had me falling in love with this Disney classic. And as a bonus, this was actually the first attraction I ever rode and the first attraction my children ever experienced as well. What can I say? I’m a sucker for tradition.

I’m going to leave you with this fantastic POV video from The Dis team so you can enjoy the newest Magic Kingdom version right now.