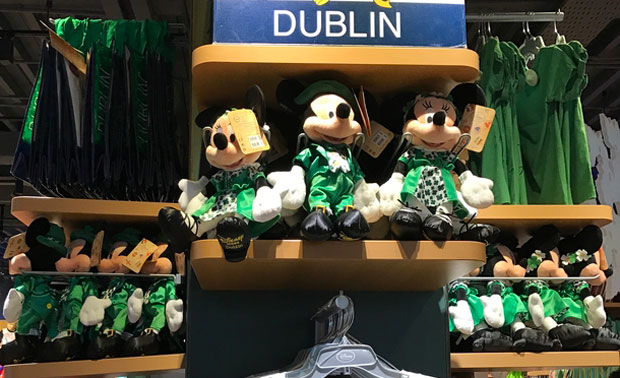 For those of us who really need a Disney Parks fix, the Disney Store can deliver a dose of much-needed magic when traveling to the parks just isn’t feasible. While I’d argue that all Disney Stores have something interesting to offer, stores located in domestic and international city hubs can be especially exciting. These locations often have specialized merchandise and impressive displays, and for those interested in how the company operates, the experience gives fascinating context on how the brand is represented in different markets!

Let’s take a look at the Disney Store in Dublin, Ireland!

But first, a bit of history:

The Disney Store on Grafton Street is the first one to open in the Republic of Ireland, and launched in May of 2011. Since its opening, this store has done well – in 2014, it was reported that Dublin’s Disney Store was one of the top 5 most successful locations in Europe.

Those familiar with Dublin will know Grafton Street as being famous for its many shops in Dublin’s city centre. The Disney Store stands nestled in a row of shops, with a deep blue facade, and character silhouettes decorating the window above the store. As I already mentioned, this Disney Store location features some specialized merchandise. The Dublin-focused merchandise display is situated near the entrance, and offers a number of items to choose from. This merchandise featured two main themes: Mickey and Minnie enjoying themselves around the city (as depicted on clothing, a pin, and mugs), and those same characters dressed as iconic Irish figures (soft plushes with Mickey dressed as a leprechaun, and Minnie as an Irish dancer). Near the entrance and cash registers is a dedicated spot for Disney movies, and while that might not seem like a spot for unique merchandise, you may find some interesting gems. For instance, I was particularly excited to see that the movie Zootopia had a different name in Ireland! After moving past the localized merch display and checkout line, there is a pavilion where children (and the young at heart, of course) can enjoy crafts, as well as visual clips of the newest movie and television releases. Around this area is also merchandise for various age ranges: There’s Disney Junior for young children (including Mickey Mouse Clubhouse and the Lion Guard), an array of toys for older children, and a soft plush wall. For fans of the Disney princesses, there’s an entire area of the store dedicated to these characters, and the theming is bold! To reach this area you pass a large statue of Princess Ariel, and have to walk through a castle threshold to get into a room complete with pink and gold upholstered chairs, a pink checkered floor, and a large figure of Princess Anna. The merchandise featured here includes all things princess, including costumes, toys, classic dolls, and more. Onward to the second level! The Dublin Disney Store has two floors, and as you walk down the stairs to the basement, you start to see the theming change to Marvel, Star Wars, and Pixar properties.

Two larger-than-life friends (Captain America and Hulk) are there to greet you along the way! Upon entering the lower level, the theming is so immersive, it’s easy to imagine that you’ve been actually transported into a movie set for one of these franchises.

Collectible figures are not only for sale, but some premium pieces are on display to enjoy. Even the entrances to Cast Member-only areas of the lower level are themed, and featured screens showing movie clips from the recent Star Wars films. And that’s it! While this Disney Store isn’t necessarily as large as others in city hubs, the theming is fantastic, and this store definitely delivers some Disney magic. It’s a must-visit spot for traveling Disney fans in Dublin!