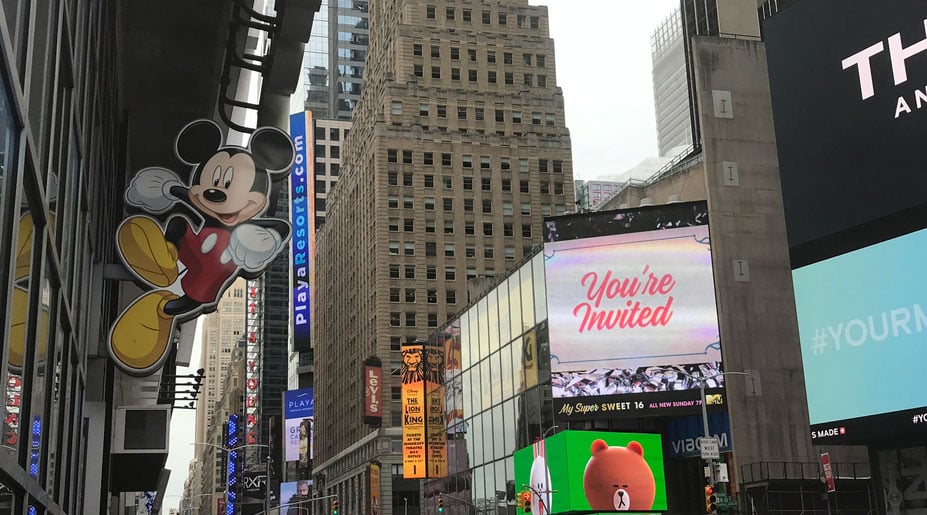 For those of us who don’t get to Disney Parks and Resorts as much as we’d like to, the longing for Disney can be temporarily soothed by an occasional trip to the Disney Store. While most mall Disney Stores can sometimes feel more homogeneous than magical, stores located in city hubs often feel like they’ve been sprinkled with an extra amount of pixie dust. The New York City Disney Store — located right in Times Square (1540 Broadway, between 45th and 46th Street, to be exact) — is no exception! With specialized merchandise, larger-than-life displays, and thoughtful theming, this store is fun! The more you can pay attention to the details, the better your experience can be.

Before we start, let’s talk about history:

This store has been operating in Times Square since the fall of 2010, after it replaced the three-story, 30,000-square-foot World of Disney Store on 55th Street and 5th Avenue. The closing of the undeniably grand World of Disney Store in December 2009 still hurts for many who loved it. Why did World of Disney close if it was so wonderful, do you ask? Rent was high! According to a New York Times article, occupying the 5th Avenue space cost up to a whopping $15 million annually in rent, while the space in Times Square cost a fraction of that (at the time that the article was written, a Times Square storefront was estimated at $2 to $3 million).

As you walk through Times Square to the Disney Store, the first thing to look for is Mickey Mouse, who sticks out from the building and should be visible from a block or two away. Spotting him first always makes my anticipation build! As you enter the Disney Store and move towards the heart of the first level, you’ll be greeted by two larger-than-life figures of Mickey and Minnie. While floor plans change throughout the year, this is often where you can find much of the specialized, NYC-focused merchandise in the store. There are plenty of items that you can choose from, which may feature classic Disney characters incorporated into New York City landmarks or the skyline (there are many choices of clothing that fit this format), or classic characters dressed as NYC icons. For instance, Minnie as the Statue of Liberty, or Micky as a “Big Apple.” Travel mugs, soft plushes, picture frames, and different sized Tsum Tsums all follow that format.

For Disney pin collectors, there are also NYC Disney pins for sale as well, including Minnie as the Statue of Liberty, and both Micky and Minnie enjoying a day in The Big Apple. The New York City Disney Store’s interior theming seems to be a step up from what can typical be seen at mall stores. Displays often feature huge toys and characters, including ones from Toy Story, and over-sized versions of the Disney Animators’ Collection dolls. The wallpaper is peppered with a number of Disney characters and inspiring quotes, and is also definitely worth paying attention to, to help get in the Disney spirit! One aspect of the store that often gets many “oohs and aahs” from guests is the corridor with an escalator to the second floor. Hanging from the ceiling are lanterns of all shapes and sizes, which look like they were taken straight from the movie Tangled.

Green wooden tree branches also help fill out the corridor space, and if you look carefully, you’ll see that silhouettes of iconic Disney characters can be found among the branches. Can you spot Snow White and Goofy in the photos below? Upon arrival to the second level, you’ll find that there are a number of themed sections that make up this floor. One of the first is typically (again, floor plans sometimes change) dedicated to Star Wars and Marvel merchandise, but also often includes other properties that fit in that market, depending on what movies are newly released.

During the spring of 2017, there were displays for Pirates of the Carribean: Dead Men Tell No Tales! As you walk past the Star Wars/Marvel section and towards the back of the store, you’ll pass a pavilion that is dedicated to in-store activities and visual entertainment. This is where children (and the young at heart) can enjoy even more Disney magic during their visit to Times Square. The Disney Store will often hold special events for children here, including interactive story readings, trivia, and dance parties. For times of these special events, call ahead of your visit! Beyond the activities pavilion is an additional checkout line (there’s also a set of registers on the first floor), and at the very back of the store is a section dedicated to the Disney princesses. A very large castle facade marks the entrance of this section, and beyond it, you can find a plethora of Disney princess costumes and accessories. The princess section also features a number of wall mirrors (you can see one on the left in the photo below), which are magic — or at least interactive. Previously, you could hold a princess costume or accessory of your choosing up to the mirror, and that would cause the princess associated with that costume to appear and say a few words. Now that format has changed: The images that appear seem to occur randomly, and feature characters that are in the princesses’ stories, but not the princesses themselves. During my visit, I spotted Tangled‘s Pascal and Fergus from Brave doing a number of silly things in these mirrors. Sprinkled in with the princess costumes are displays that feature new movie releases, like this display of the enchanted rose from Beauty and the Beast. As you return back to the escalators, the final section on the second level is dedicated to small children. There is a large selection of merchandise for infants and toddlers, including clothes, soft plushes, and baby toys. As you move further towards the exit, the merchandise skews towards a slightly older demographic and features Disney Junior properties, including Mickey Mouse Clubhouse, Elena of Avalor, Jake and the Neverland Pirates, and The Lion Guard. And there you have it! While the Times Square Disney Store is inarguably smaller (and arguably less grand) than the World of Disney store that once stood on 55th Street and 5th Avenue, this Disney Store has many things to offer that make it irresistibly charming. For tourists or New Yorkers who need an occasional Disney fix, it’s a great source of that coveted pixie dust!