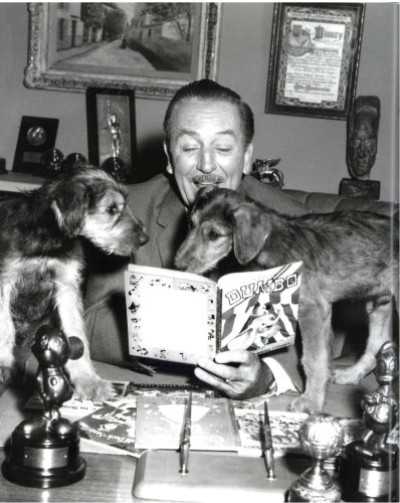 Who has a Little Golden Book in their home? Do you have a favorite Little Golden Book? Does The Poky Little Puppy bring back fond childhood memories? It may surprise you to know the illustrations for The Poky Little Puppy were done by Gustaf Tenggren, a Disney artist who also rendered inspiration artwork for Walt Disney’s Snow White and the Seven Dwarfs. Tengrenn also illustrated The Tawny Scrawny Lion and The Shy Little Kitten amongst others. In fact, to bring in much-needed income during World War II, Disney Studio artists illustrated some of the most popular Little Golden Books

Walt Disney reading the Little Golden Book’s story of Dumbo to a couple of friends.

These classic Disneyland Little Golden Books are from my personal collection.

The concise storytelling and lush illustrations of the early Disney Little Golden Books served to inspire current Disney/Pixar artists and animators like Andreas Deja, Pete Doctor, Glen Keane and John Lasseter. John Lasseter has said, “Because the Golden Books have influenced the Disney and Pixar artists so much, to go to one of the young artists and say, “We’d like you to do the Golden Book of this film is one of the greatest treats you can give them.” 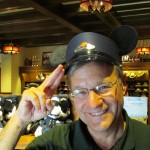 Michael Bowling is the Disney Historian for The DIS Unplugged and host of the Connecting with Walt Podcast. He lives in Northern California with his wife, Carol. They have two adult children and one granddaughter who shares her grandfather's love of all things Disney. Michael's passion for Disney began during his first visit to Disneyland as a one-year old when some Pixie Dust got into his bloodstream during Tinker Bell's flight over Sleeping Beauty Castle. Since then he has learned all he could about the Disney magic and shared it freely with his students, family, neighbors, co-workers and pretty much anyone who will listen. Michael and Carol are Disneyland and Walt Disney World annual passholders, D23 Gold Charter Members, DVC owners and The Walt Disney Family Museum members. They enjoy spending time at Disneyland and Walt Disney World, have traveled with Adventures by Disney and Disney Cruise Line, and relaxed at Aulani. When Michael is not at the parks or spending time with his family or in his garden, which is filled with Disney topiaries and statues, you can find him at The Walt Disney Family Museum in San Francisco. Michael enjoys reading about Disney history and learning all he can about Walt Disney and those who make the magic happen for all of us.