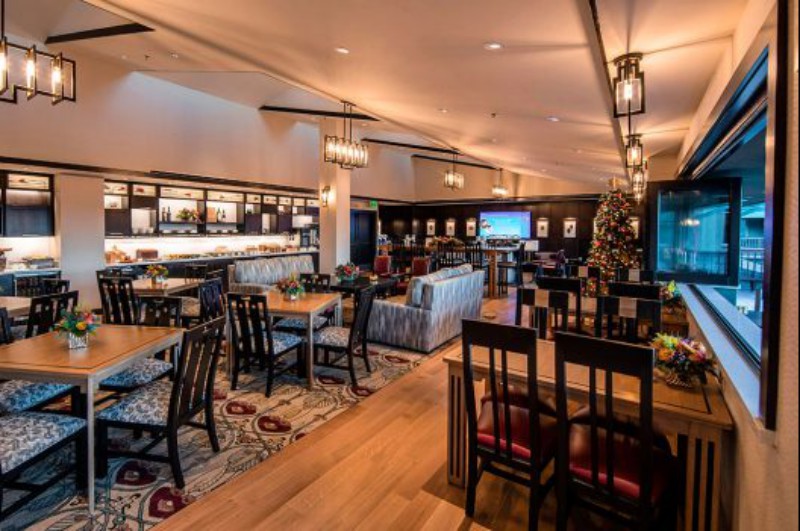 Over the last year, Disney’s Grand Californian Hotel & Spa at the Disneyland Resort has received a major makeover, and one of the last pieces of the puzzle has finally been completed. The Veranda, once The Craftman’s Club, is now open on the sixth floor for concierge-level guests. While  much of the hotel is inspired by the work of Frank Lloyd Wright, the updated concierge lounge gets its cue from the work of Charles Rennie Mackintosh, a Scottish architect who was also active during the arts and crafts movement. Imagineers used Mackintosh-designed Willow Tea Rooms in Glasgow as their inspiration, including light colors to make the room seem spacious, plus new wall-to-wall windows opening to the balcony that bring in the natural light. At night, The Veranda makes for a great fireworks viewing location.

The furniture features tall backs, streamlined shapes, and light colors. The light fixtures and buffet wall include stained glass, which was also design element of the Willow Tea Rooms. Since Mackintosh was the inspiration, Imagineers commissioned European artists that helped create custom pieces for the lounge, including a 10-food long ceramic arrangement featuring handmade, vintage plates painted with a redwood landscape. The Veranda is available to guests staying in the Grand Californian’s 77 concierge-level rooms, offering complimentary refreshments or just a place to relax.