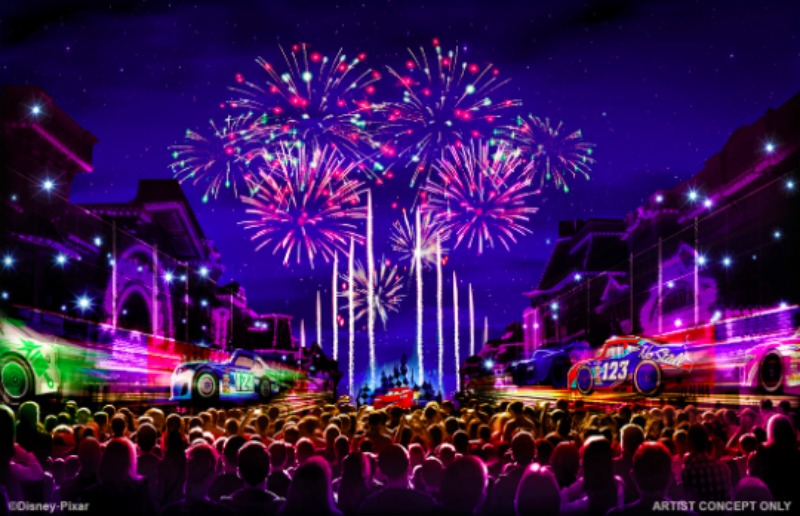 ShareTweetSubscribe
Beginning on April 13, 2018, as part of Pixar Fest, the limited-time celebration of friendship and beyond that was announced at this year's D23 Expo, an all-new fireworks spectacular will make its debut at the Disneyland Resort along with the return of two favorite parades as well as even more beloved Pixar characters, new décor, atmosphere entertainment, themed food and beverage, and new merchandise items. “Together Forever – A Pixar Nighttime Spectacular” will boast dazzling pyrotechnics, memorable music, the theme of friendship. Guests will be invited on an emotional journey that begins when Pixar characters meet each other for the first time. The new spectacular will showcase new-found friends setting out on adventures and overcoming obstacles together as they form life-long friendships. The story will be brought to life with projections on some iconic locations throughout the park such as Sleeping Beauty Castle, the water screens of the Rivers of America, the façade of “it’s a small world” and the buildings of Main Street, U.S.A. Better sit down for this one, the new nighttime spectacular will even feature a special flyover by Buzz Lightyear at Sleeping Beauty Castle!! Also beginning on April 13, the incredibly popular “Paint the Night” parade will return, only this time, to Disney California Adventure park. As you may know, this parade features numerous Pixar characters including pals from Toy Story, Monsters, Inc., and Cars. Another Pixar story is set to join “Paint the Night” parade later in the year. With the launch of Pixar Fest, “Pixar Play Parade” will travel through Disneyland park for the first time ever. Guests will be thrilled to hear that the parade will begin as most Pixar films have, with an appearance by the iconic and charming Pixar lamp. Additional new parade components will feature characters from UP and Inside Out. Guests can also expect to see a whole lot of new merchandise which will include an exclusive Pixar Fest charm bracelet. There will be multiple bracelet options along with an assortment of charms that display fun friendship messages and favorite Pixar characters, guests can mix and match for themselves, or friends and family! You can join in on the celebration when Pixar Fest begins April 13, 2018! Source: Disney Parks Blog
ShareTweetSubscribe