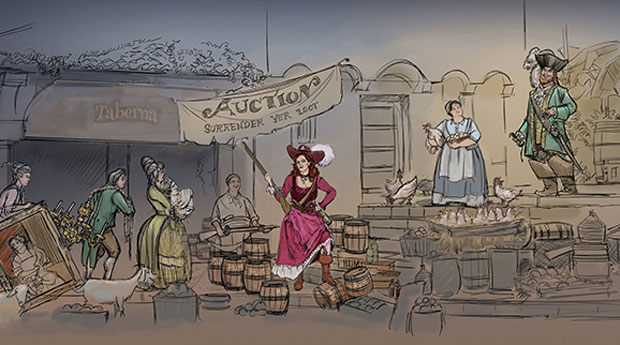 At the tail end of June, Disney announced changes that would be made to the iconic “Redhead” scene on the Pirates of the Caribbean attraction, first at Disneyland Paris, then eventually at the U.S. parks. Concept art was released, but today, thanks to Annual Passholder and YouTube user DLP Welcome, we have an actual example of what those changes look like.

The Disney Parks Blog announced on June 29th that the wench auction scene would undergo changes. Any change to an existing attraction causes controversy among Disney fans. For a ride as beloved and established in the minds of guests new and old, though, this change has had a significantly larger affect on fans. A petition was started on change.org to keep the scene the same, garnering a fair amount of attention.

Regardless of which side of the argument you fall on, you now have the opportunity to see how the changes will look in person.

The auction is not the only change featured in the video, however, as Captain Barbossa also stars in a new scene.

Do these changes make the ride any better, any worse, or just different?

Take a look and decide for yourself:

There has been no announcement as to when exactly these changes are coming to the States, but be sure to check in with us for any and all attraction updates.