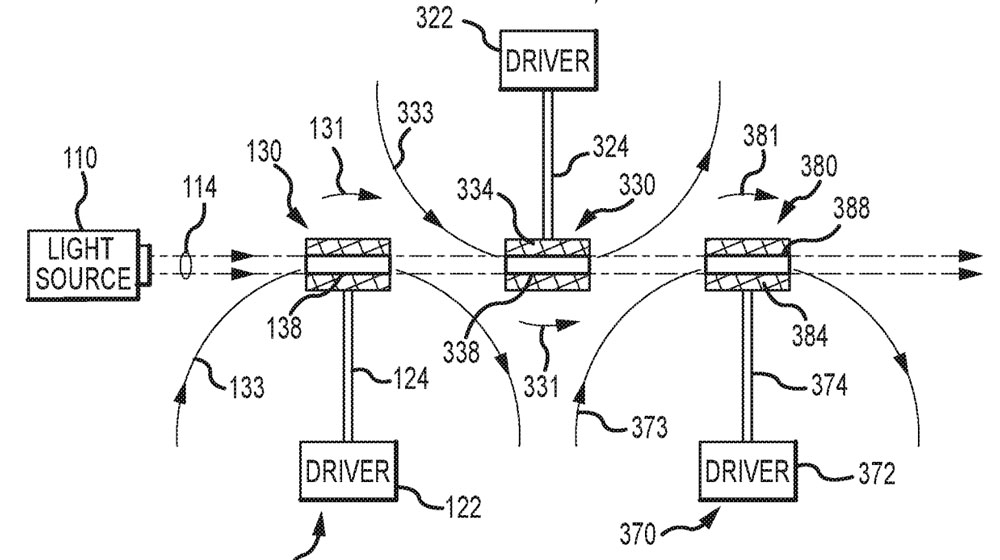 If we take a look at the most recent patents that Walt Disney Enterprises, Inc. has applied for, one thing is clear: Disney is working diligently to create some spectacular and accurate live shows for Star Wars: Galaxy’s Edge. Not only have we seen patents that simulate blaster damage and muzzle flashes, but a new application this week centers on creating the signature Star Wars laser blast in midair, right in front of guests’ eyes.

The patent application, published today, is titled “Special Effects System for Generating a Midair Laser Blast Illusion.” While it may not directly use the words “Star Wars,” it does a pretty good job of describing the Disney-owned franchise and the need to replicate it onstage:

In the entertainment industry, there are many settings or venues where it is desirable to recreate scenes from popular movies often with live actors performing a scene from a movie. An often used lighting effect in movies is a streak or flash of light from various sources. For example, many futuristic movies include battles where the actors operate laser-based props, e.g., blaster gun props, which produce laser blasts. The laser blast beams in the movie travel through the air and may have the appearance of a volumetric ball or slug of light, which may be red, green, blue, or another color, that travels from the actor’s weapon prop through the air in a line to its target.

While a blaster bolt effect can currently be simulated in a few ways (projecting an image on a screen behind the performers), current technology doesn’t allow for it to look accurate from 360 degrees, which would be optimal for live show reenactments.

Briefly, a special effects system (or theatrical prop lighting assembly) is provided that is operable to generate a lighting effect that appears as a bolt or streak of light, such as a green cylinder of light that is several-to-many inches long (e.g., 6 inches to 18 inches in length or more length when two or more dynamic light receiving assemblies are used to provide “hand offs” of the bolt or streak of light) with no visually perceivable projection screen or surface. In this way, a volumetric slug or ball of light moves in midair through viewer’s field of vision for unique displays useful for recreating movie-like laser blasts that are 360-degree viewable, e.g., from the front or back as the light may pass between two sets of viewers.

While the document’s description may be a bit complex, the principle behind the technology is not. The system uses a laser projected on a set path. Alongside the projected path are machines with elongated support rods; on the end of those rods is a piece reflective mesh. The machines rotate, sending the reflective surface on the rod’s end in a semicircular path. Once the reflective surface intersect with the laser’s path, it appears as a bolt of light. Many of these machines lined up in sequence create the illusion that the bolt of light is traveling down the pathway. These machines rotate quickly enough that quest won’t notice them. From the viewer’s perspective, the only thing they’ll see is a colored cylinder of light travelling across a stage.

If we were to combine this system with the blaster effects and muzzle flash patent applications from two weeks ago, here is how a Galaxy’s Edge live show could play out:

We witness an encounter between one of our heroes and a classic villain  — I’ll use Han Solo and Boba Fett as examples. Han draws his blaster and fires at Boba Fett. As he fires, the muzzle of his trusty sidearm flashes with expelled energy. A bolt of light appears to have been released from his gun, travelling across the stage towards his enemy. While close, it doesn’t connect with his intended target, instead hitting the wall behind him and causing a burn mark to appear.

While this technology could make its way into other areas of Disney intellectual property, such as a Guardians of the Galaxy show or other Marvel presentation, it is a safe bet that the primary intent is for Star Wars: Galaxy’s Edge.