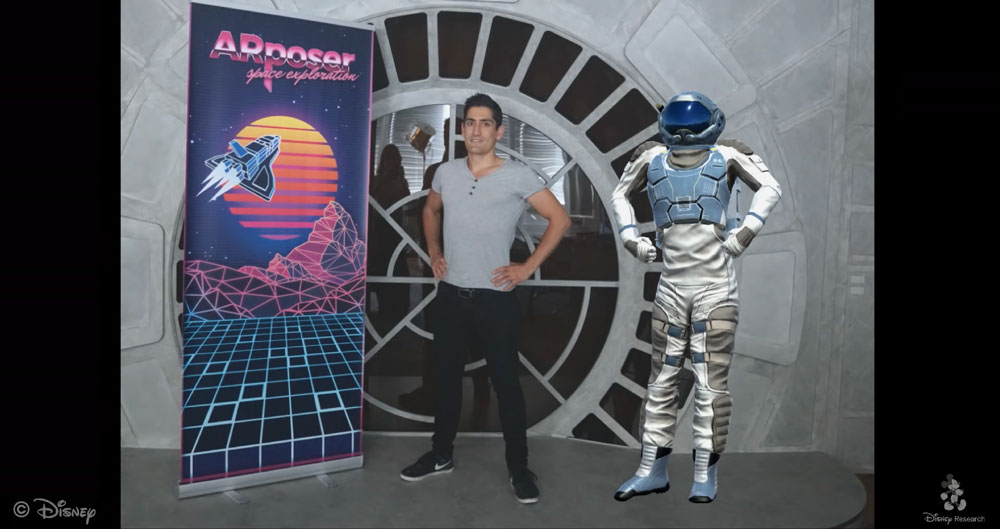 Many times, the immediate applications of the scientific and technological breakthroughs churned out by Disney Research aren’t easy to see. That is not the case with their newest publication, AR Poser, which allows users to pose with, or as, a digital avatar for enhanced photo op purposes.

Published on July 18th under the full title “AR Poser: Automatically Augmenting Mobile Pictures with Digital Avatars Imitating Poses,” this program may show us the next step in the evolution of selfies.

During operation, AR Poser interprets the pose of the human subject in front of the camera with a 2-D pose estimation (using only the RGB information received from the camera). Once it has that, it matches it with a set of predetermined 3-D poses that it has stored, projecting the closest match onto the image.

This is just the first step in AR Poser’s development, and there are limitations, so don’t expect to be using this technology by the end of the week. In current operation, the image must include a real-world marker so that the position of the camera can be gauged and depth may be determined. There are also limitations to what poses and shapes can be projected right now. The program has 12 poses that may be matched to the subject, and poses which create shapes not included on that list won’t be replicated. Size is also an issue, as some characters appear larger than others, but that problem might possibly be solved by judging the subject’s shoulder and feet proportions.

Due to differences in hardware, the 2-D pose estimation program would have problems successfully operating on the wide variety of mobile devices out there; Disney Research’s solution was to make it cloud-based. The entire process of interpreting an image and projecting the digital avatar only took around two seconds.

While still in its early stages, AR Poser could lead to numerous advancements in augmented reality picture modification. As selfies and featured photo ops become more prevalent in theme parks, it isn’t out of the realm of possibility that we could see applications of this in Disney Parks in the future, especially considering their wide array of digitally animated intellectual properties.