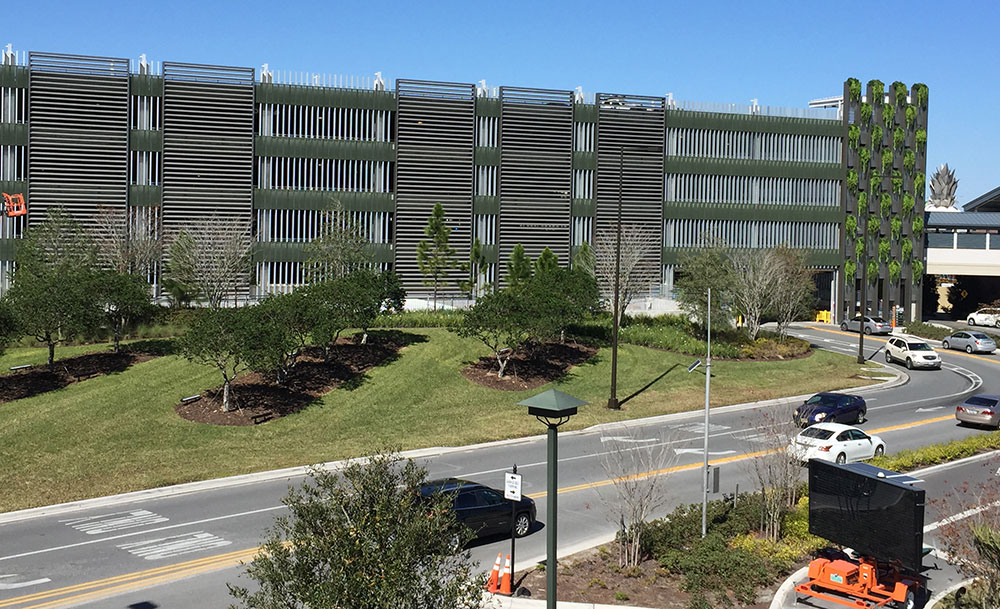 UPDATE 10/1/18 — Reedy Creek Administrator John Classe said Monday that the district made a decision not to use cameras or license plate capture in a new parking system at Disney Springs, due to concerns about guest privacy.

“Privacy certainly was one of the factors that came into our decision,” Classe said. “How far do you take the technology and where do draw the line on privacy. License plate images could become public records. We don’t think there’s any value in that. The point is, telling people where they can park quickly.”

But Classe said the current systems, from Q-free/TCS system, had problems, and the parking staff couldn’t access it remotely.

“We actually had to leave our office and drive to the garage if we needed to see the data from the system,” Classe said. “The new system from Indect will allow us to access the system from our smartphones. That way we can redirect traffic if needed, among other things.”

Walt Disney World’s government, the Reedy Creek Improvement District, has filed a notice with Orange County that says it intends to rip out the parking technology at Disney Springs parking garages and replace it with a new system.

The new system is from Indect Parking, which has been developing controversial technology that uses cameras to track and store visitor license plate numbers. The benefits are that such a system can help people find their cars, besides telling you where empty parking spaces are.

The current system at the Disney Springs Lime and Orange garages is from Q-free/TCS. That company uses ultrasonic images to detect whether there’s a big chunk of metal (your car) sitting in the parking space, and then transmits that to a system that displays how many spaces are open on a given floor or row.

Parking technology has been developing rapidly. It’s not clear if the new Indect system will use cameras or ultrasound as a replacement. Indect has been developing a new system it calls Upsolute. Its website says Upsolute’s “built-in features will help you increase your parking capacity to 100%, track vehicles of interest, monitor customers, provide detailed parking statistics, and maximize your parking revenues.”

If the new system uses cameras, such technology has been controversial in other areas, although it is also used to boost revenue for the garage owner by providing exact information about peak hours and tracking license plates to see how often that car visits and where it parks. Legally, however, the operators are not able to obtain the name of the person the license is registered to.

Efforts to speak to Reedy Creek administrators or to obtain a comment from Walt Disney World’s media office were not successful on Friday.

Either way, it’s a surprise to some people that Disney Springs is already considering removal of the systems it installed just a few years ago when the garages were built. And that includes the CEO of Q-free/TCS, Dan Radford.

He says his company’s systems were well-received by Disney Springs visitors, although it had software problems after installation that have been fixed. The cost of the tech was estimated at over $1 million for each garage.

“Reedy Creek hasn’t informed us that they are ditching our technology,” Radford said Friday. “We heard rumors, but we still have a contract to provide the technology for a third garage.”

Reedy Creek, which is controlled by Disney, is ready to shell out $2.37 million for the new systems at Orange and Lime, according to the notice filed with the county.