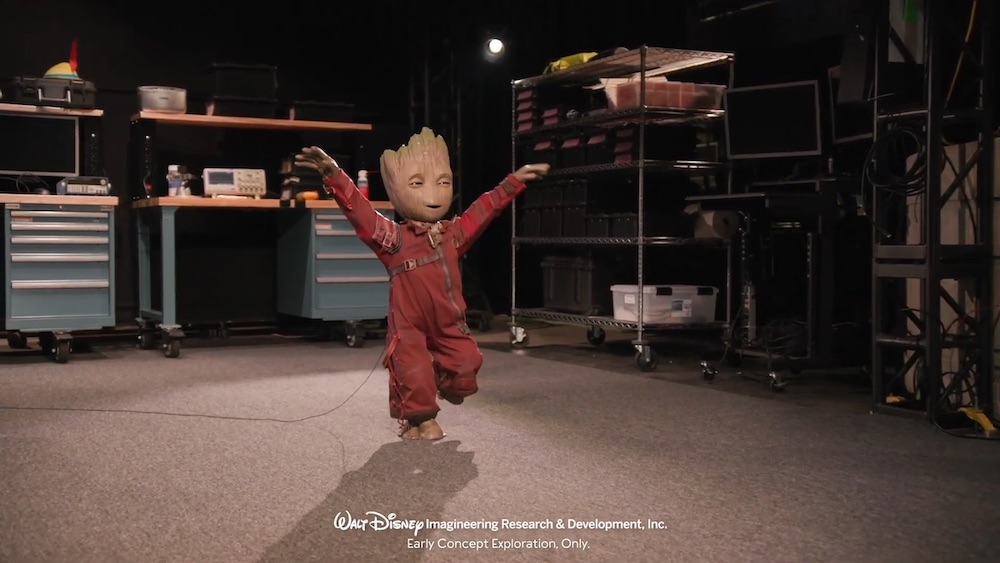 If you’ve been glued in on Disney news over the past 24 hours, you’ve most likely been enamored by Disney’s really real lightsaber, the opening date of Avengers Campus, or EPCOT’s brand new flagship store. Of all those stories, the biggest by far was Josh D’Amaro wielding a real lightsaber during the “A Special Look Inside Disney Parks” virtual event. Only invited media/guests had the chance to see the lightsaber with their own eyes and the internet spent hours wondering if it was actually real or just CGI before Walt Disney Imagineering’s Scott Trowbridge stepped in to confirm it was completely real and they’re not ready to share photos or videos.

It was a truly exciting moment. Who would’ve thought Disney would actually succeed at building a fully retractable realistic lightsaber? However, there’s one problem with the hype around the lightsaber. It completely distracted from the fact that Walt Disney Imagineering has also developed a WALKING BABY GROOT from Guardians of the Galaxy.

While this isn’t the first time that we’ve seen a living character from Walt Disney Imagineering, it’s the first new one we’ve seen in a long time. Disney’s Living Character Initiative was developed to allow guests a chance to interact with characters like never before. Lucky the Dinosaur was the first with more physical characters following including the Muppet Mobile Lab and Remy. Talking Mickey also fell under this initiative as well as Turtle Talk with Crush and Monsters Inc. Laugh Floor.

This is the first time that a Marvel character has been brought to life by Walt Disney Imagineering and it’s extremely exciting. The walking Groot only appeared for a very short time at the end of the presentation, but it looked like this version of Groot was still connected to a controller with wires. It happened very quickly, so I could be wrong, but obviously the character could also be adapted to be wireless before it makes its debut – if it ever does.

Baby Groot has come to life before in Disney Parks as a meet and greet character with Star-Lord, but this was completely different. This Baby or Young Groot appeared to be 2-3 feet tall and was wearing an outfit that looked similar to his Ravager outfit in Guardians of the Galaxy Vol. 2. It was extremely life-like, as much as a walking Marvel sentient tree-like creature can be, and was extremely adorable.

However, not every character out of Disney’s Living Character Initiative has made it into the big leagues. Wall-E was created and made a few appearances, but he never became a staple of the parks. It would be perfect if Disney could debut a living, walking Groot character for the new Avengers Campus, but we’ll have to wait and see. Disney also has a habit for only showcasing their innovations for extremely small groups during events and presentations, so maybe this walking Groot wont’ see the light of day past the virtual event or a grand opening moment one day.