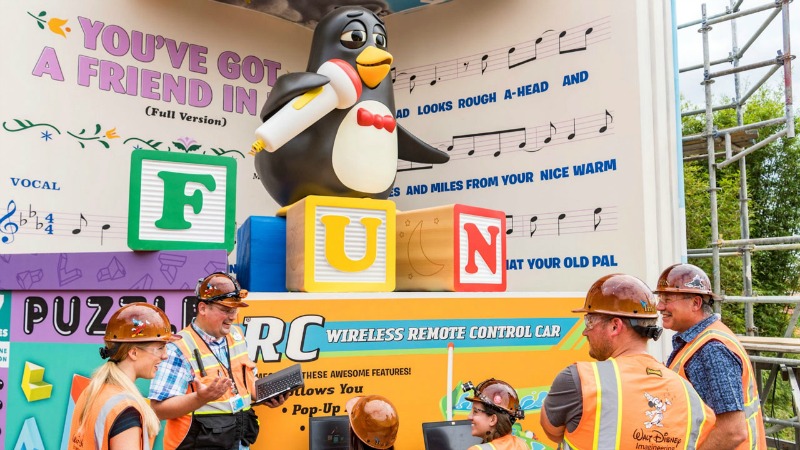 During Good Morning America on ABC, Disney shared a new look at the squeaky penguin, who is the first and only Wheezy Audio-Animatronics figure in a Disney theme park.

Wheezy was first introduced in Toy Story 2 when Woody’s arm was torn and he was set up on a high shelf in Andy’s room. It was in this location that Woody met Wheezy, a penguin toy with a broken squeaker. Later in the movie, Andy’s mom went to take Wheezy and place him in a yard sale but Woody manages to rescue him before he himself was grabbed by Al of Al’s Toy Barn then the rest of the toys’ escapades unfold. Wheezy reappears at the end of Toy Story 2 – with a new, working squeaker – singing ‘You’ve Got A Friend In Me.’

VIDEO: Get a behind-the-scenes look at the Wheezy Audio-Animatronics figure in #ToyStoryLand at Disney’s Hollywood Studios! pic.twitter.com/bZPUUljKmW

Guests will enjoy seeing Wheezy as they ride Slinky Dog Dash at Toy Story Land. Wheezy sings ‘You’ve Got a Friend in Me’ with Mike’s assistance. Mike is the tape recorder who provided Wheezy with a microphone and Mr. Spell “texts” funny remarks. The toy friends are surrounded by various other toys including a Rubik’s cube, a canister for a game called Pick-Up Snakes, toy wooden blocks spelling out F-U-N, and toy packages for an RC Car and a triangle puzzle game, all framed by a towering book, Mr. Pricklepants Songs for Singing.

Take a look at the video below for new on-ride footage of Slink Dog Dash! Additionally, guests will be entertained by the ‘Sarge and the Green Army Man’ Drum Corps, who will march through the land several times daily and stop to play ‘Sarge Says’ with guests, and other games with a larger-than-life Pixar ball and crayons. Guests will also be given the option to join in on their interactive boot camp and see if they have what it takes to become an official recruit in Andy’s Backyard.