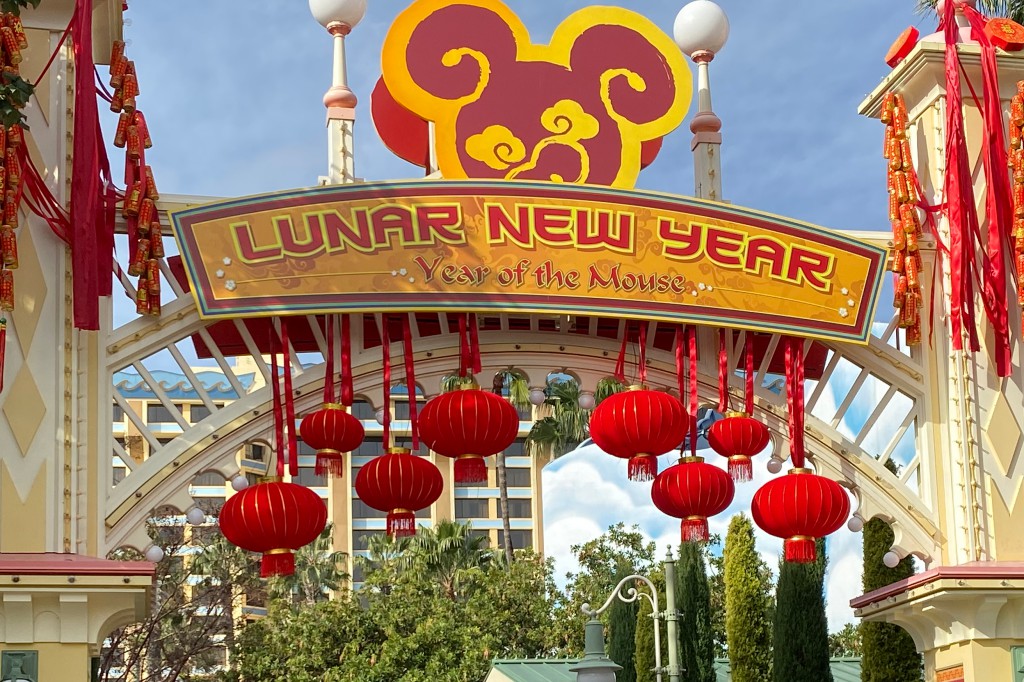 The Lunar New Year celebration is in full force at Disney California Adventure, and with it comes four unique marketplaces serving a variety of Asian dishes. Being the team player that I am, I tried pretty much everything. After two days, eight entrees, four desserts, and the help of a friend, here are my thoughts.

My first stop was at Longevity Noodle Co., which is situated just to the left of the Golden Zephyr. As the name implies, both entrees here feature noodles. 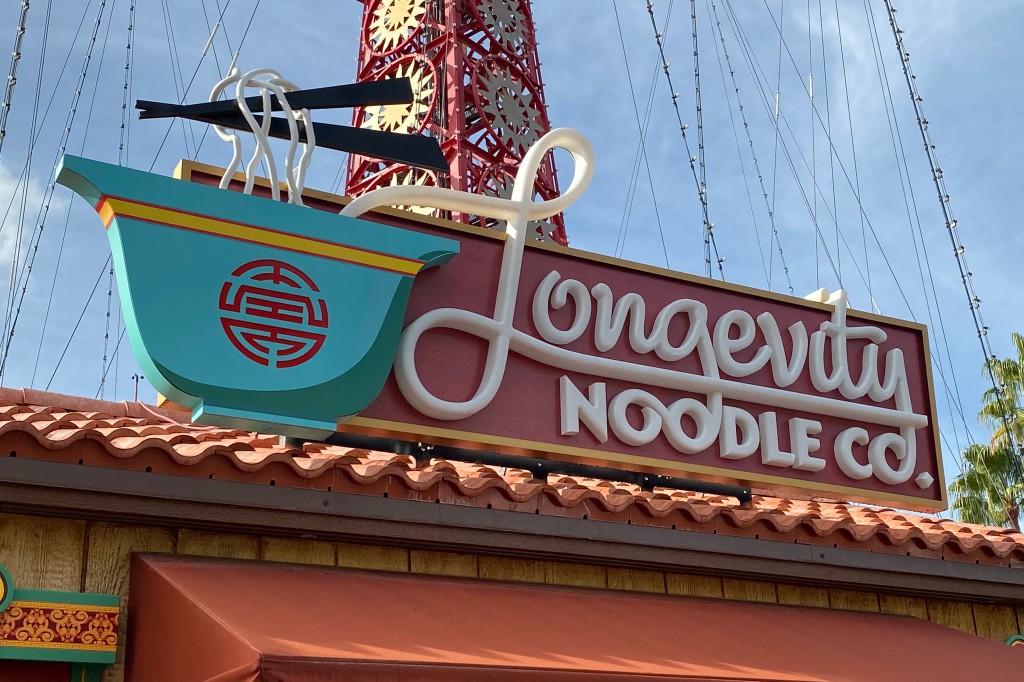 The Chicken Meatballs and Lo Mein Noodles [$7.50] dish is back this year, and was as delicious as I remembered it. The noodles seemed a bit dry and I’m not sure if that was intentional, still the flavor of the meatballs mixed with the cabbage salad made for a great combination. This was probably my favorite entree of Lunar New Year. 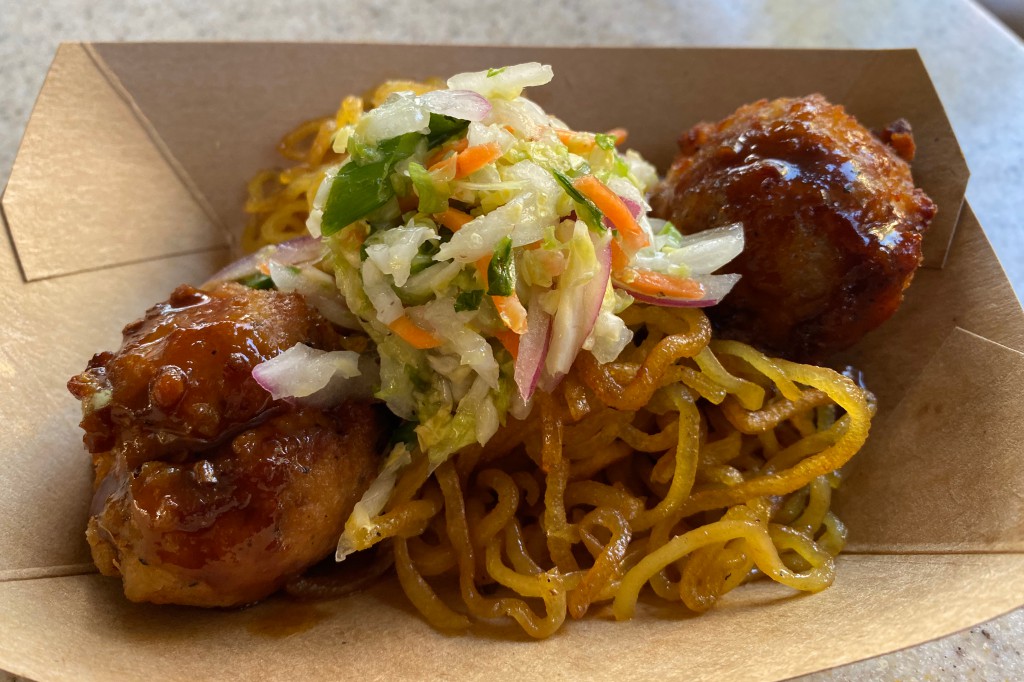 I’m not a big fan of cold noodles, but the Vegetable Egg Roll and Chilled Sesame-Garlic Noodles [$7.00] surprised me. What looked like plain limp noodles, actually had a nice flavor and a bit of spice. The egg roll was good, but needed something more than the cilantro-cashew sauce that it was served with to dip it in. It’s not necessarily something I would get again, but it was a nice veggie option. 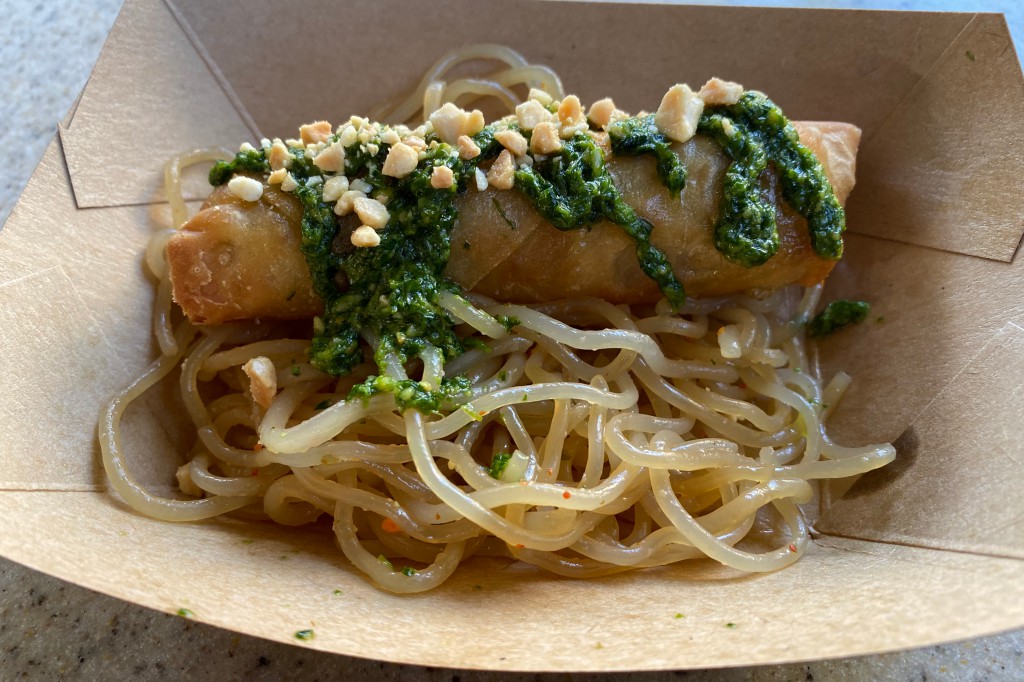 For dessert, the Black Sesame Mochi Donut [$6.00] is an interesting new dish. Unfortunately, it’s more novelty than anything, and I didn’t think there was much flavor to it. There are better desserts.

Next, my friend Louella Laureola, who has appeared occasionally on DIS Unplugged podcasts, joined me at Prosperity Bao & Buns, which featured one bao and one bun. This marketplace is in front of The Little Mermaid-Ariel’s Undersea Adventure. 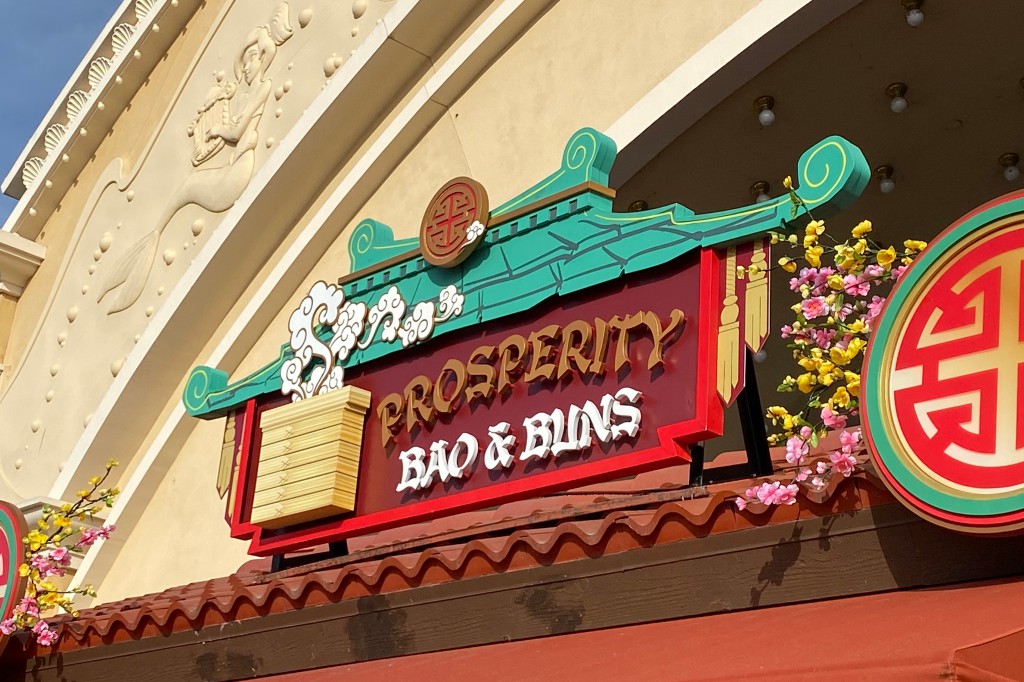 We started with the Char Siu Pork Bao [$8.00], which is topped with pickled onions and jalapeno. Despite avoiding the peppers, we both thought the flavors were good, but that the pork was dry. It’s still one of the better entrees, though a little pricey. 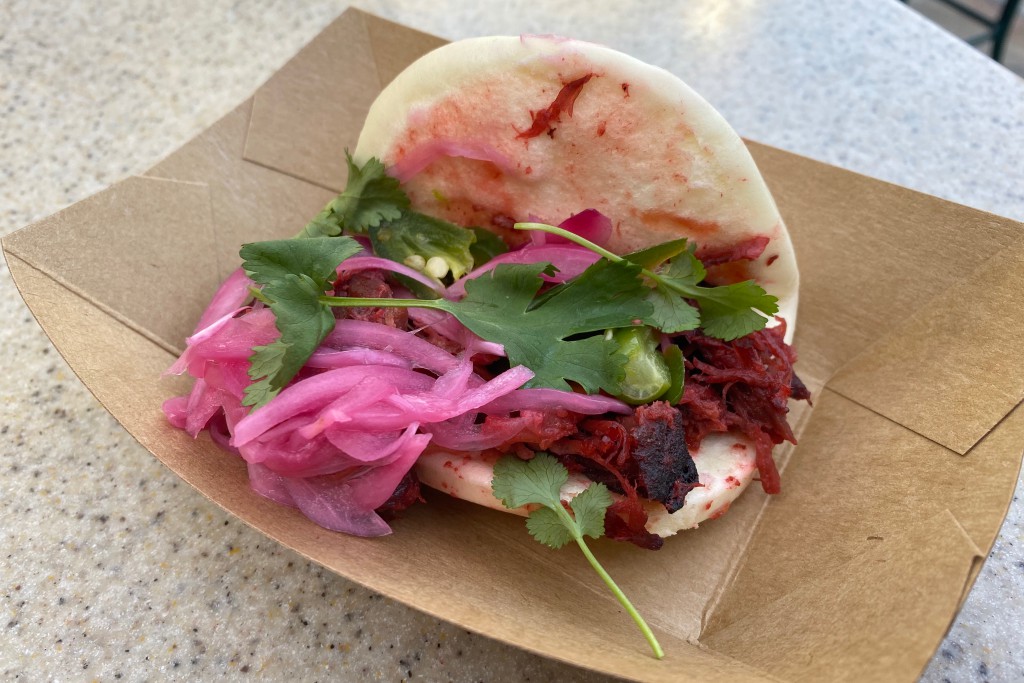 The Mickey Chinese Hot Dog Bun [$7.00] is back and is the perfect option if you bring your picky younger eaters to Lunar New Year. That’s a nice way of saying that it’s very plain and we were wishing we had grabbed some mustard (which IS available at some of the kiosks around Paradise Gardens). 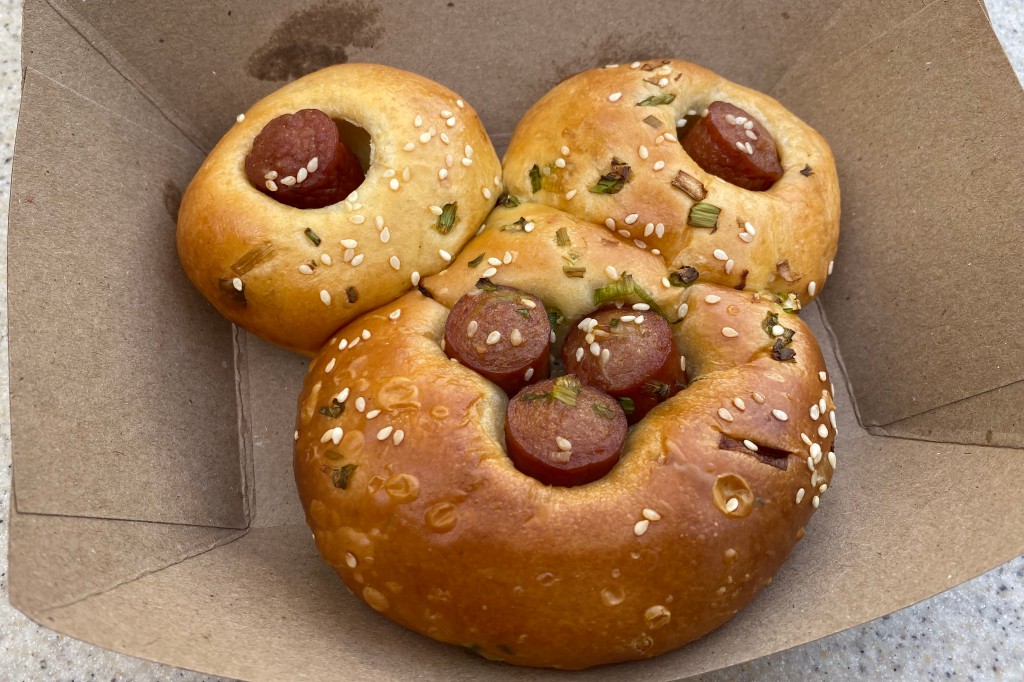 The dessert wasn’t a bun, but a Mango-Pineapple Pastry [$5.50]. This was a very nice dessert and perfect to share since it actually comes with two pastries. It was perfectly sweet and not too tart. This was my favorite dessert of Lunar New Year and we both thought it was one of the best values. 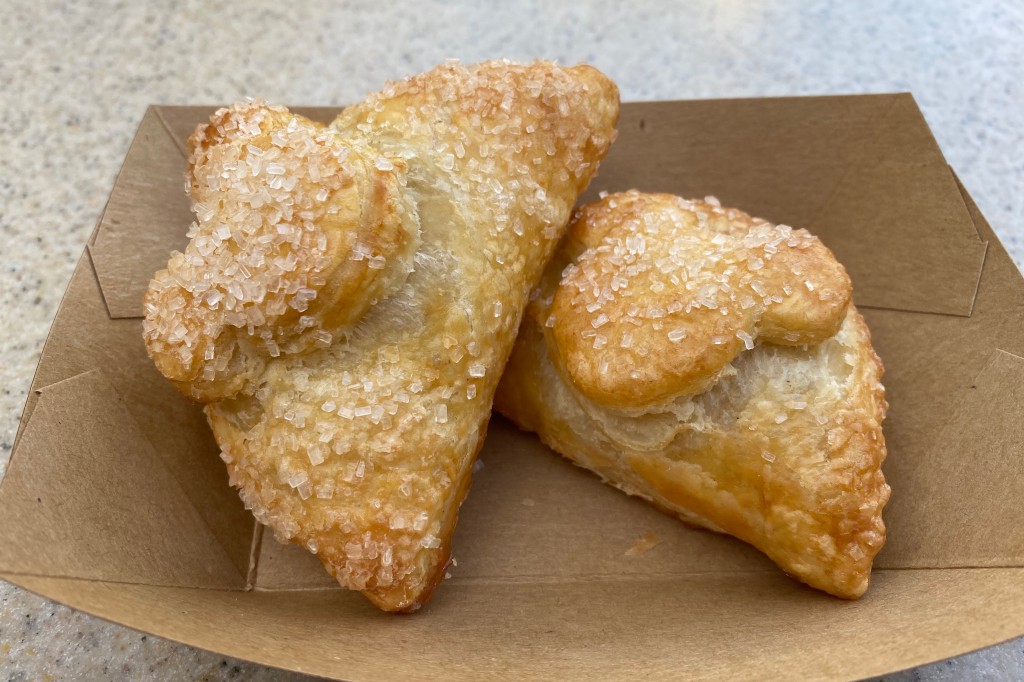 Louella wanted to try the short rib dish, so we headed over to Lucky 8 Lantern, which lived up to its name. Look for this marketplace next to Longevity Noodle Co. in front of Golden Zephyr. The marketplaces share a set of cashiers. 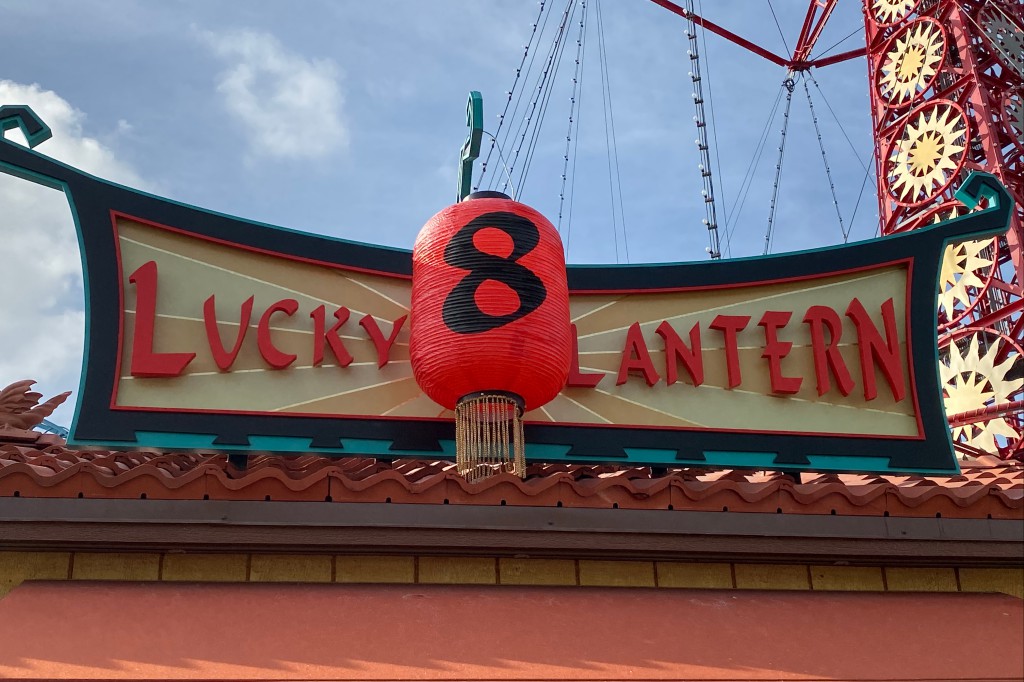 We first had to try the Smoked Beef Bulgogi Short Rib [$8.25], which is served on a bed of steamed rice and topped with fresh red onion. The menu lists a rice “cake” and a green onion salad and I suppose you could call what we received a cake, it just wasn’t what we were expecting. What was on top was NOT a green onion salad, but still added to the entree. The flavor of the beef was very good and the meat was tender, with the crunchy red onion enhancing the dish. 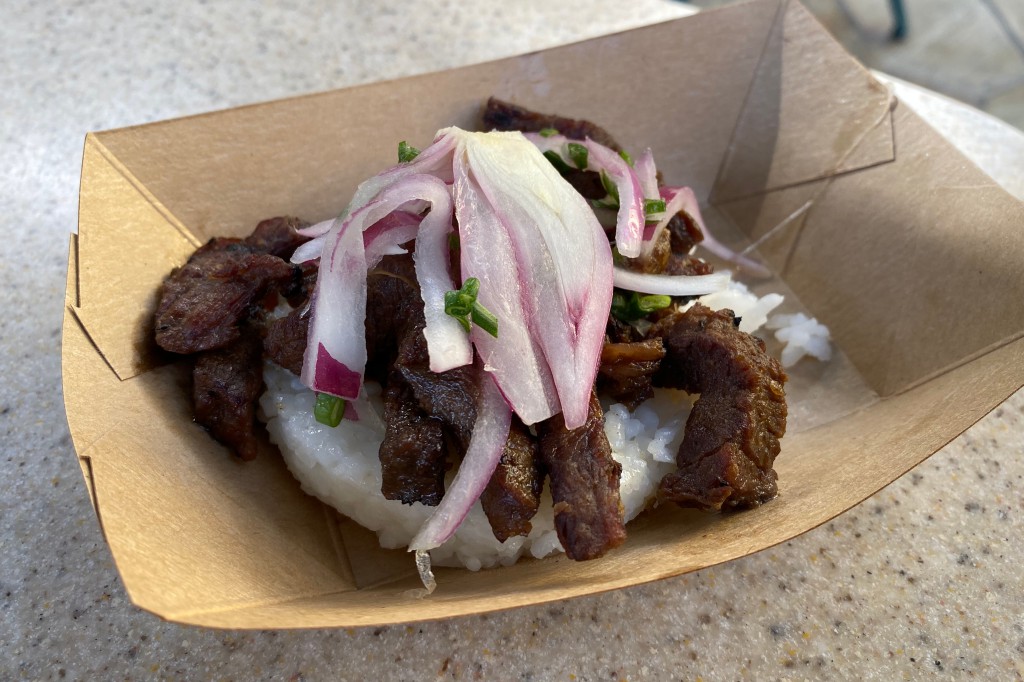 Louella doesn’t enjoy shrimp, but still liked the Shrimp Fried Rice [$8.00], topped with bacon and edamame. I enjoyed the dish as well, with the edamame adding some needed texture. While there were only three shrimp (luckily ALL MINE), I thought they were perfectly cooked and picked up the smokiness of the bacon. 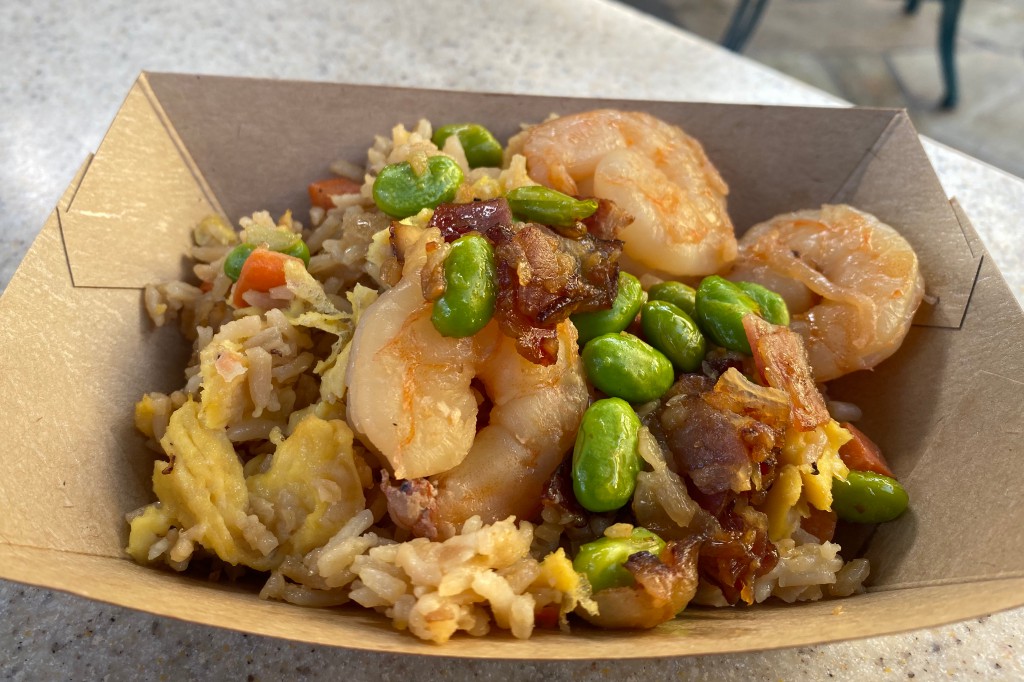 For dessert we had the returning Mandarin Orange-Green Tea Tart [$5.50], which was Louella’s favorite item at Lunar New Year. This is a nicely balanced dessert, with the tartness of the fresh fruit and the creaminess of the tangerine cheesecake underneath. 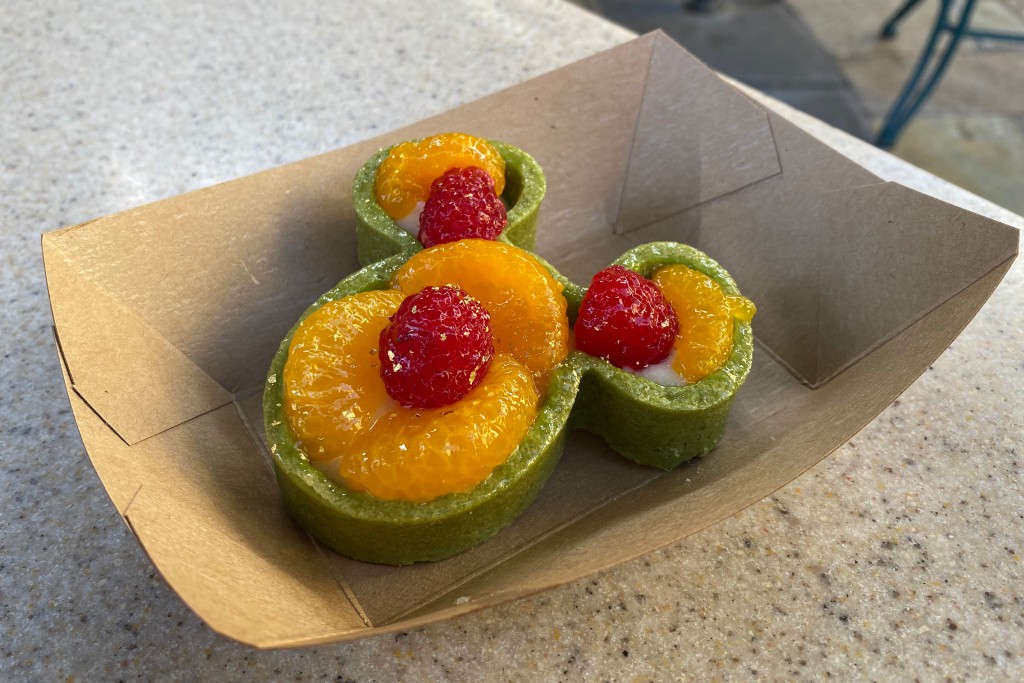 Finally, I was left alone at Red Dragon Spice Traders to try the final dishes of the weekend, including the festival requisite macaron. 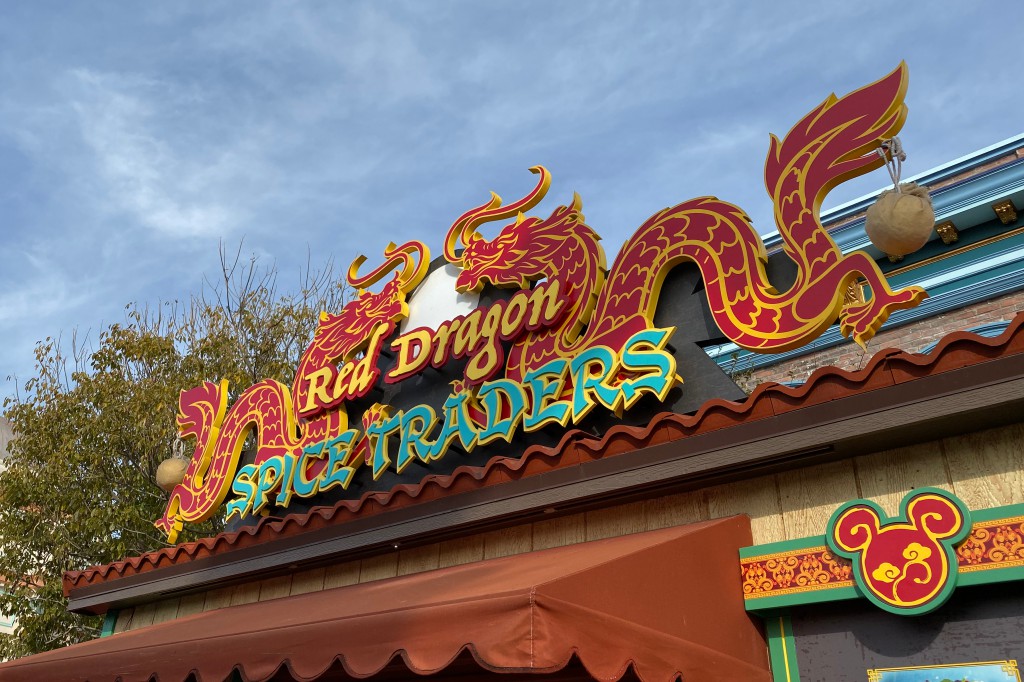 I started with the new Shrimp & Ginger Dumplings [$8.25] topped with sriracha mayo. While I enjoyed the flavor and the bit of heat from the sriracha, I couldn’t deal with the texture. These dumplings were way too mushy for me, but others might enjoy them. 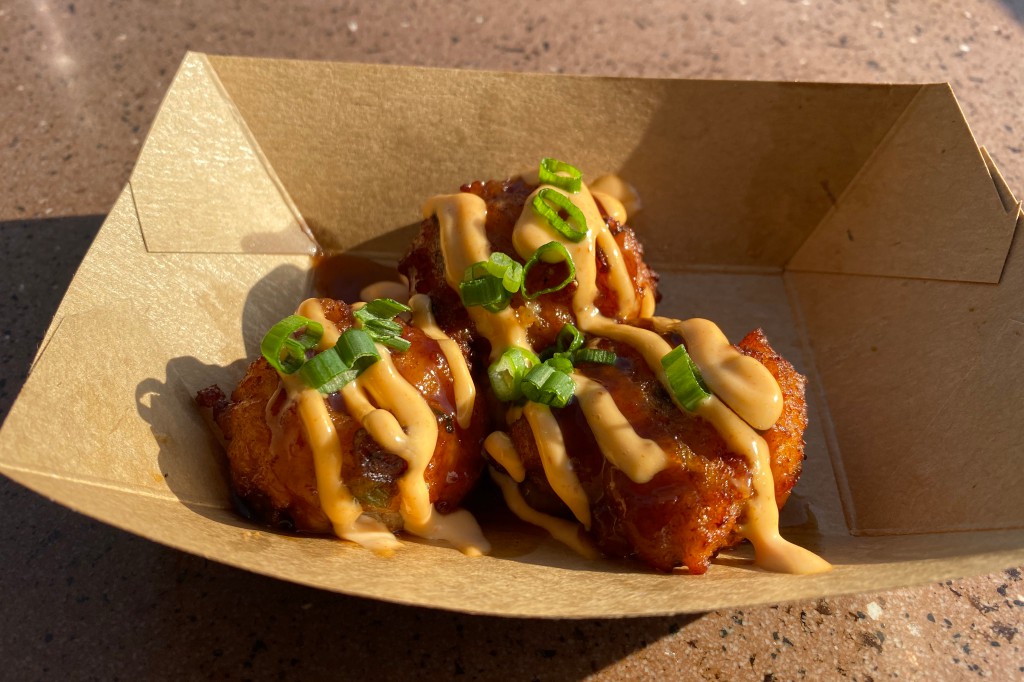 This year instead of serving it with rice, they took that same flavors and served Firecrackers Three Cup Chicken Wings [$7.50]. I liked the wings and thought they had good flavor, but the ones I was served weren’t as spicy as advertised. I experienced no “firecrackers” on my wings. 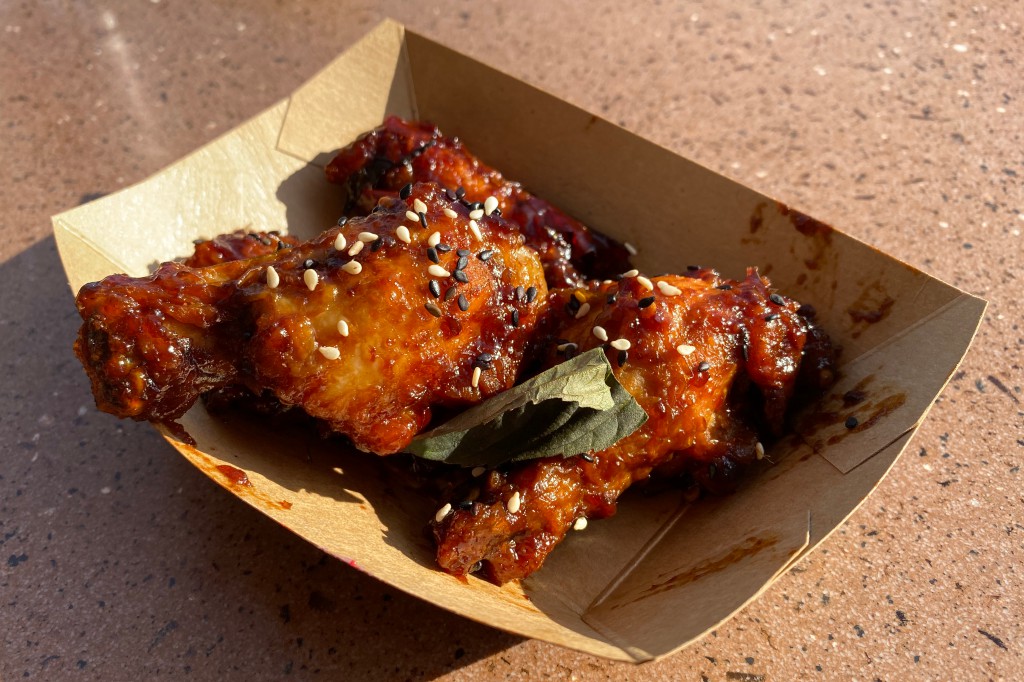 I washed the spicy (or non-so-spicy) dishes down with the Honey-Lime Green Tea [$6.00], which is a refreshing option (with a cool sugar skewer). The drink is also served with bourbon [$13.00] and I might try that next time around. 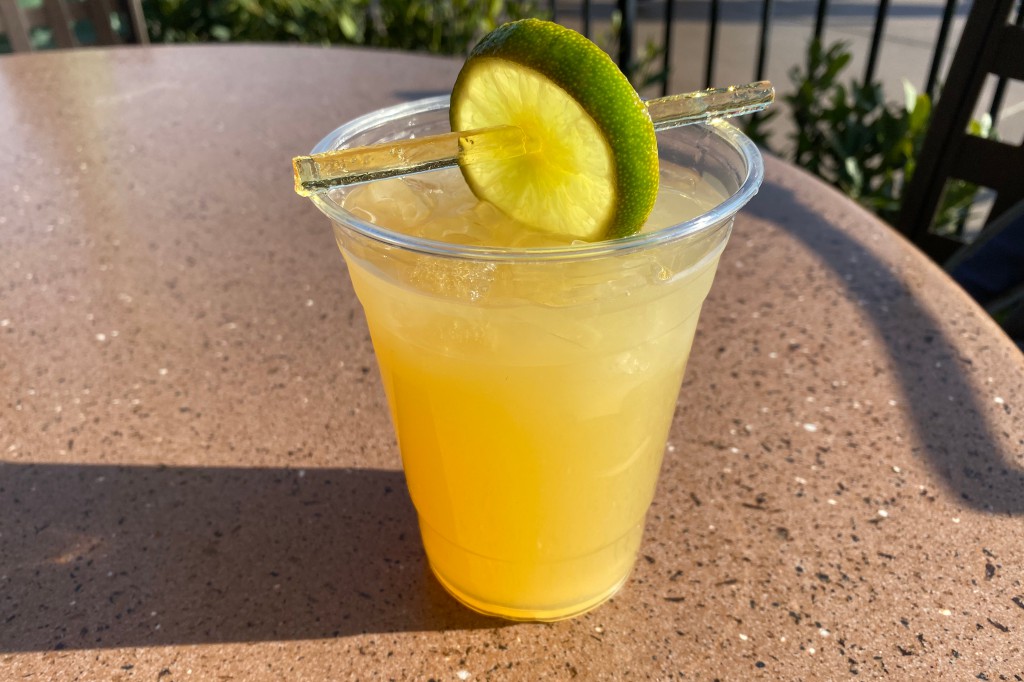 Dessert was the macaron that never changes. The Purple Yam Macaron [$5.50] has been around several years and succeeds because it’s pretty and it’s shaped like Mickey. Compared to the other desserts at the festival though, it’s way too sweet. It’s time for a new macaron at Lunar New Year. 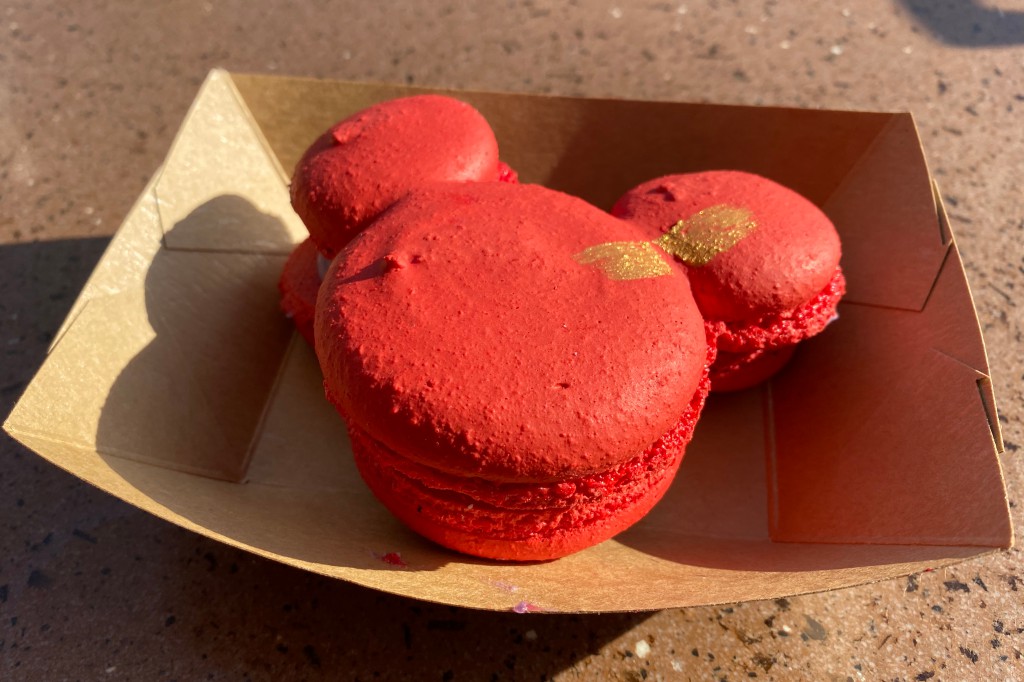 The Sip & Savor Pass is back this year ($42 or $39 for Annual Passholders) and includes 6 non-alcoholic items and a souvenir lanyard. Be sure to do the math and don’t use it for items that are less than the $7.00 or $6.50 you paid for each of those tabs.

Also back is the option to order all of your items from any of the four marketplaces. To take advantage, you need to study the menus in advance and have a bit of a plan.

New this year, guests can use Mobile Order to avoid some, but not all, of the lines at the marketplaces. Mobile Order, of course, can’t be used with the Sip & Savor Pass). 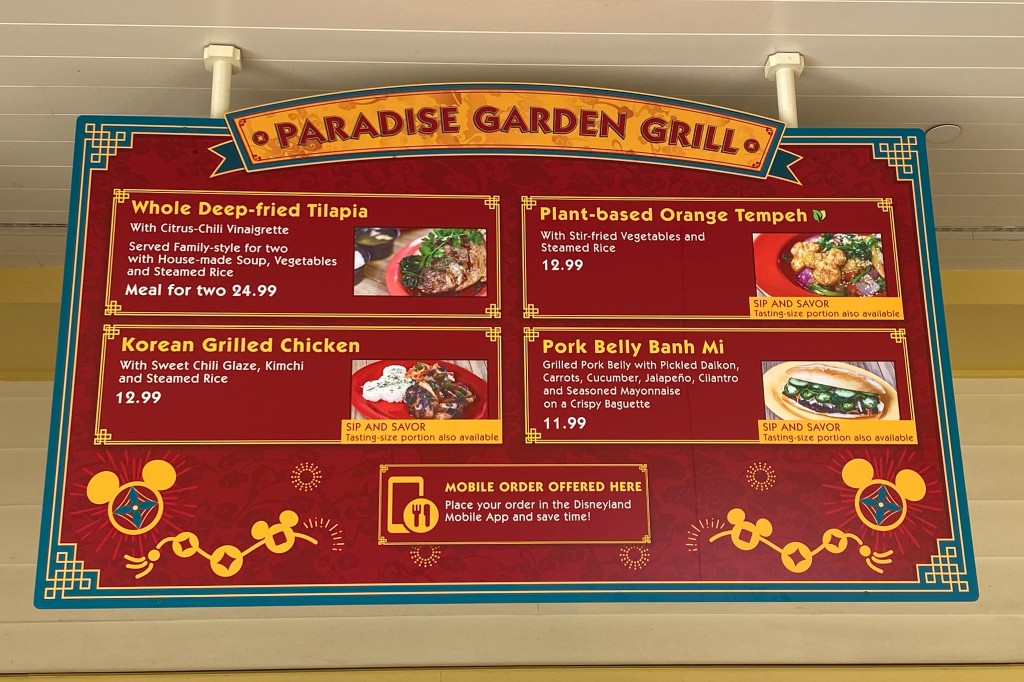 Finally, be sure to check out the Lunar New Year menu at Paradise Garden Grill, which includes a plant-based version of orange chicken, a pork belly banh mi, and the whole fried tilapia meal for two. Several of the items are available in smaller portion sizes that can be purchased with your Sip & Savor Pass.

**NOTE: During a media event associated with Lunar New Year, The DIS received a complimentary Sip & Savor Pass which was used to purchase six of the items reviewed. The remaining items were purchased at full price.