Tropical Storm Laura Strengthens as It Moves West Toward the Gulf 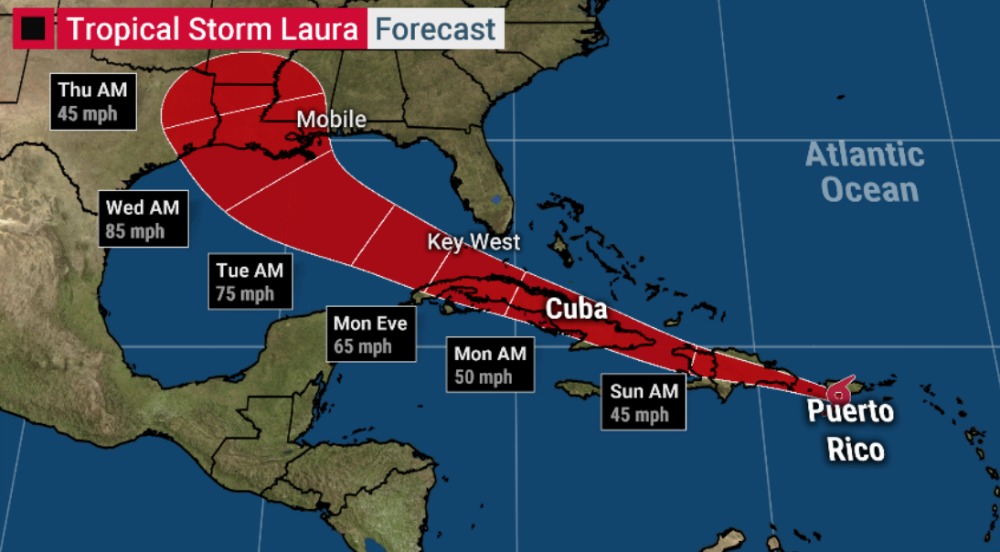 UPDATE 8/22/20 | 8am: As of this morning, Tropical Storm Laura is not expected to bring storm conditions to Central Florida. The storm can always change paths, as we know, but this post will be updated at the top should anything change.

UPDATE 8/21/20 | 8am: The NOAA Hurricane Hunter aircraft determined this morning that Tropical Depression Thirteen has strengthened into a Tropical Storm and has officially been named Tropical Storm Laura.

The storm is currently moving west at 21mph toward the Leeward Islands.

ORIGINAL STORY: The National Hurricane Center has announced that Tropical Depression Thirteen is forecast to become a hurricane as it heads on a projected path toward Florida. The storm is expected to be named “Laura” later today.

Tropical storm conditions are expected in portions of the northern Leeward Islands by Friday evening. The National Hurricane Center also states that this storm system has the possibility of bringing storm surge, rainfall, and wind impacts to Florida as early as this weekend.

If you’re getting ready to travel to Florida soon, we recommend that you keep an eye out on this storm for any further developments as it is in the very early stages of forming at the time of this post.

This post will be updated at the top with any new information as it’s released from the National Hurricane Center.