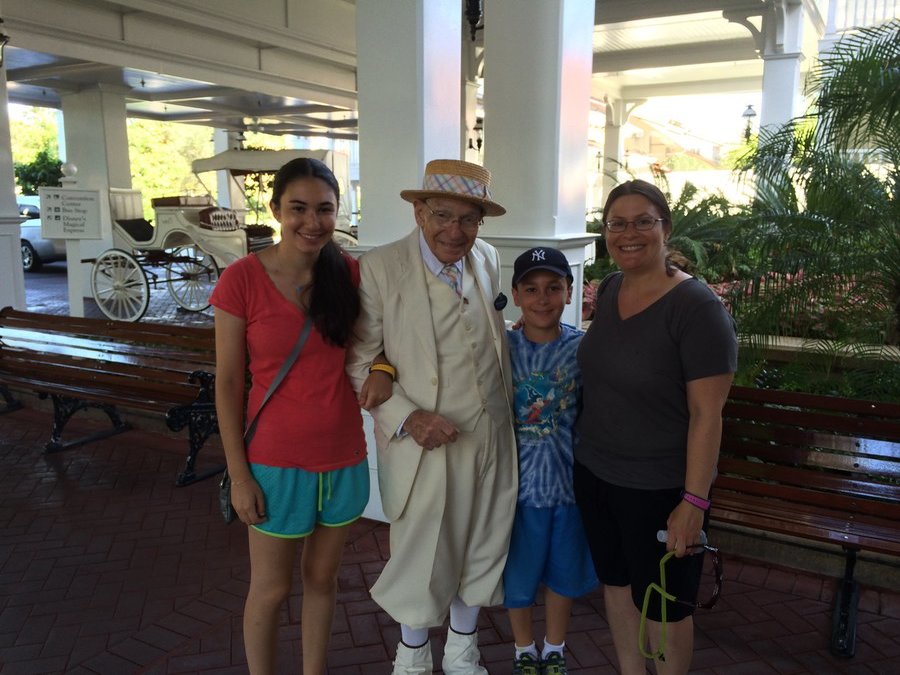 Have you ever been on a Disney vacation and run into someone you never anticipated you would get to meet? A celebrity, someone you follow on social media, an old friend? Sometimes they can be the highlight of a Disney trip.

Our favorite run-ins are with Disney cast members who are somewhat well known. During one resort hop to the Grand Floridian Resort and Spa, we bumped into Richard Gerth (photo above). Mr. Gerth was a long-time beloved greeter and made us feel at home in the grand resort.

Meeting (since retired) Chef Oscar Martinez at Disneyland’s Carnation Café on Main Street was extra special because that year he told us he was celebrating his 60th anniversary working for the parks! It was an honor to happen upon this legend, and we enjoyed his company just before his retirement from the parks.

On one trip to the parks, our family ran into “Wayne” from the Disney-themed Kingdom Keepers novels working at Splash Mountain. Wayne is a fictional character from the popular Ridley Pearson series, so it was very exciting that we ran into him at the attraction. Mr. Pearson created Wayne from an employee he met at the Disney World attraction and he was so happy to chat with us!

It is common to spot a Disney blogger or someone we follow on social media on the first day of an event. An unexpected delight was spotting and/or meeting several Disney podcasters, including our own DIS Unplugged team, on a recent family vacation to Walt Disney World! My kids excitedly pushed me into introducing myself as a fan of the show and I was glad they encouraged me; they couldn’t have been any nicer.

A family vacation at Walt Disney World would not be complete without your children spotting a teacher from their school district or a counselor from their summer camp. Some of those sightings don’t always get the same level of enthusiasm as some others, especially if your child says his math teacher is on your Disney cruise!!

It is inevitable to bump into friends from home who are also vacationing in the parks at the same time. The best impromptu times can be had with hometown friends as you hop on a ride at the same time or enjoy a quick meal together and then head on your way.

Well, I saved the best for last, at least for me. One family vacation was spent at Aulani, a Disney Resort and Spa during the resort’s opening days. We were walking around the beautiful resort and getting a feel for our surroundings when we bumped into… Joe Rohde! A long time Disney Imagineer and creative executive Imagineer for the Hawaiian resort, he gave us advice on an authentic Disney resort vacation at Aulani. He encouraged us get out and explore Hawaii! Mr. Rohde instructed us to leave the resort for a bit, take a car, and enjoy all of the island. Which, of course, we did!

What a special day that was meeting him, because it was just like Disney itself: a bit of pixie dust that created some magic. Isn’t it always the unexpected that is the most memorable part of the trip?

So, who have you bumped into at Disney lately?