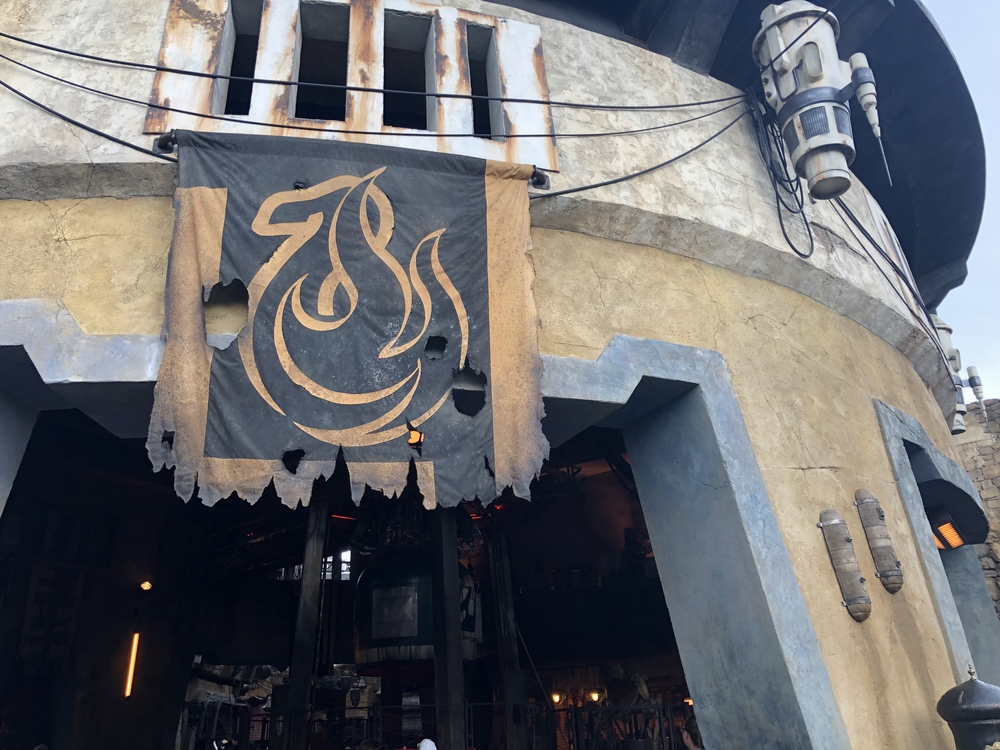 Two new menu items debuted this week at Ronto Roasters in Star Wars: Galaxy’s Edge in Disney’s Hollywood Studios, and Ryan Clavin and I stopped by to try them for ourselves.

During our time in Galaxy’s Edge, I also had my first Ronto Wrap. I know, I know. I’m late to the game. I’ve heard from everyone about how delicious they are, but, when given the choice between the Beef Pot Roast (Shaak Roast) at Docking Bay 7 Food and Cargo and the Ronto Wrap, I always went straight for the pot roast. It’s just that good. 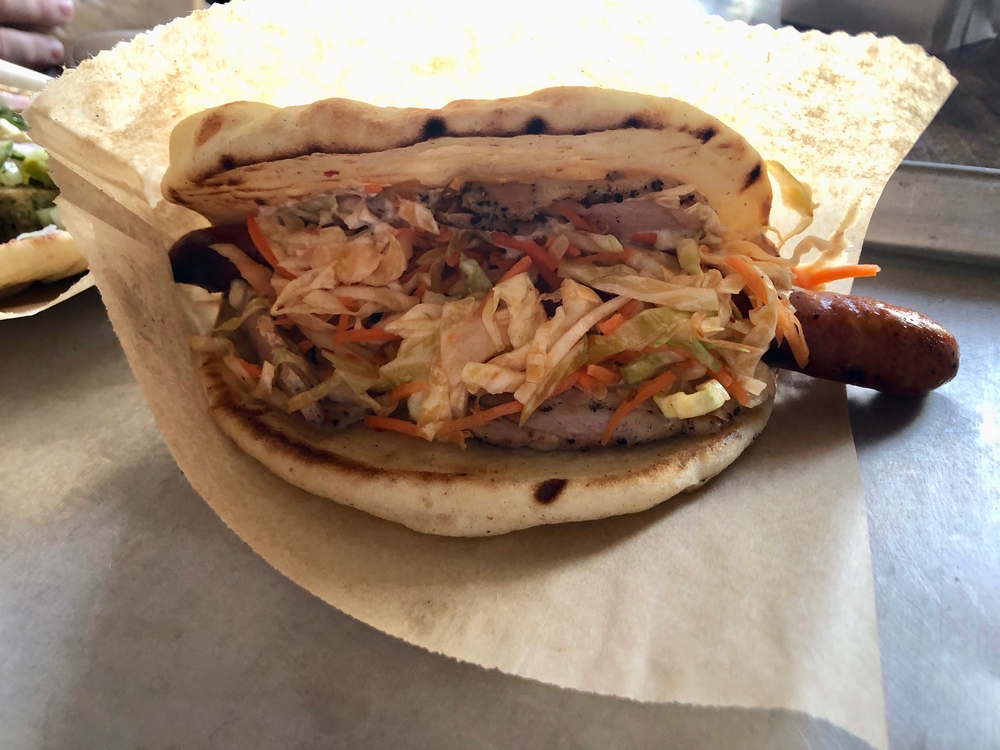 It turns out that the Ronto Wrap is just that good, too. It’s a perfectly seasoned sausage inside of a soft pita bread wrap topped with a tangy slaw, roasted pork, and peppercorn sauce.

I had assumed that perhaps the peppercorn sauce would make the wrap overly spicy, but I was completely wrong. The sauce was delicious, the sausage had a great snap to it, and all of the different ingredients combined to make an excellent and tasty grab and go choice in Galaxy’s Edge. It’s a filling entrée, and you get a lot for the $12.99 that you spent on it. 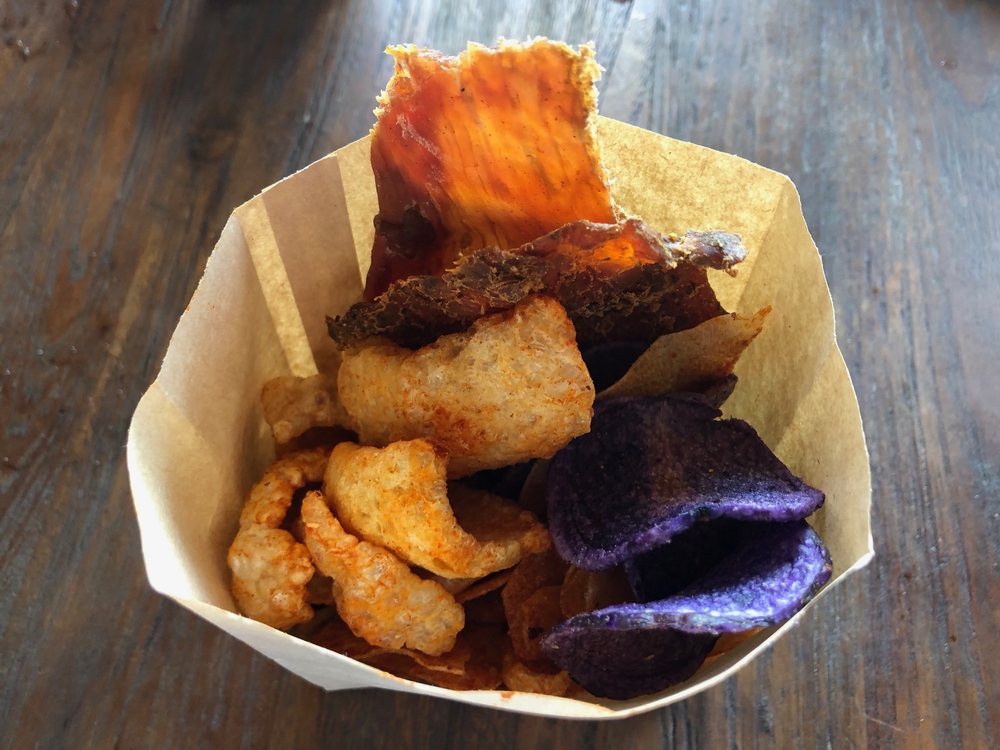 One of the new menu items is the Ronto Chips snack mix. The Ronto Chips mix contains two pieces of the Nuna Turkey Jerky (one spicy and one sweet), plantains, seasoned pork rinds, blue potato chips, and rice crackers. The Ronto Chips are $9.99, and can be served in a Mouse Droid Bucket for an additional $10.

For me, the stand out item in this snack mix are the pork rinds. As a kid of parents who were raised in the South, I was introduced to pork rinds at an early age. I love them. Mind you, I also love my health and my heart, so I don’t eat them very often. The pork rinds at Ronto Roasters were lightly seasoned. The blue potato chips were a nice touch, and made me think of the veggie chips that you find at Satu’li Canteen in Pandora – World of Avatar in Disney’s Animal Kingdom. The rice crackers were heavily spiced. I did not find plantains in our bag of Ronto Chips, so I’ll reserve judgment on those. The pieces of Nuna Turkey Jerky were not my favorite. Personally, I think I’ll skip the jerky next time. If you need a quick source of protein, the jerky will meet the need. And, while it was somewhat tasty, it was very hard to chew. It’s spiced and smoked, but it’s not something for which I’d make a return trip. 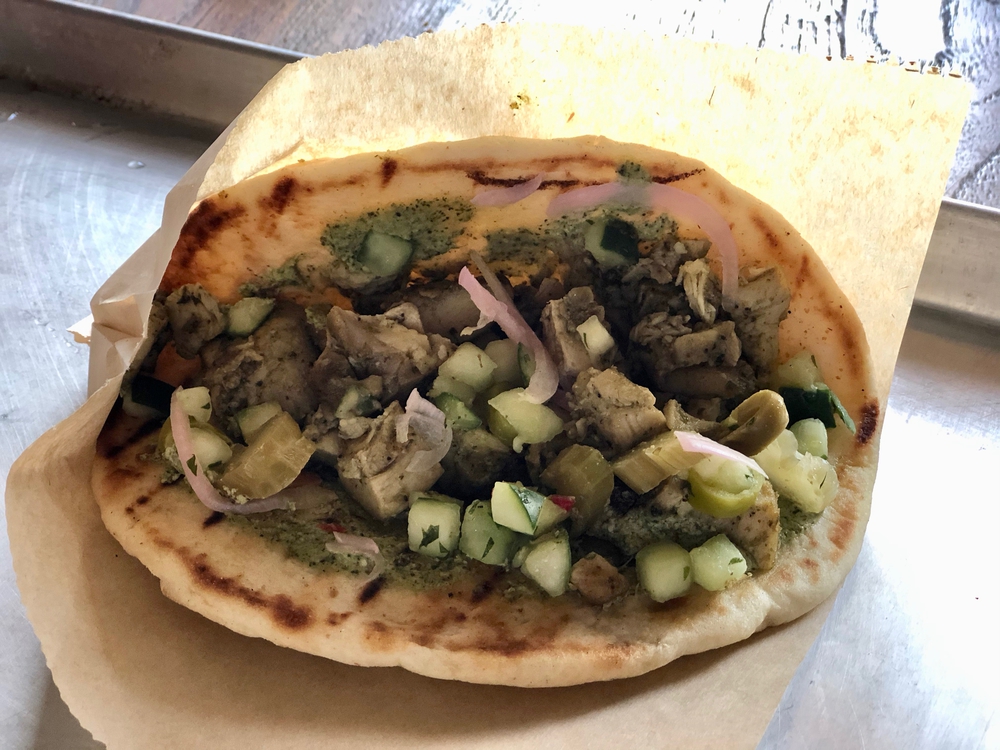 The new entrée item on the menu is the Tip Yip (Chicken) Ronto Wrap for $12.49. This dish is made with marinated chicken, spicy cucumber relish, herb feta yogurt sauce, red onion, jalapeños, and pesto. It’s wrapped in the same pita bread as the Ronto Wrap. This entrée is very heavy on the pesto, the chicken is diced, and the flavors work well together. The cucumber slaw is not too spicy, and, if jalapeños aren’t your thing, they are fairly easy to avoid. The wrap is really good, and is another great option for a filling grab and go entree.

All in all, I liked the new menu items that Disney has introduced to Black Spire Outpost. If you’ve tried the new wrap or snack mix, please leave your thoughts in the comment section below.

If you’d like to watch Ryno and I try the Ronto Wrap and the new Ronto Roasters menu items, check out our vlog below: