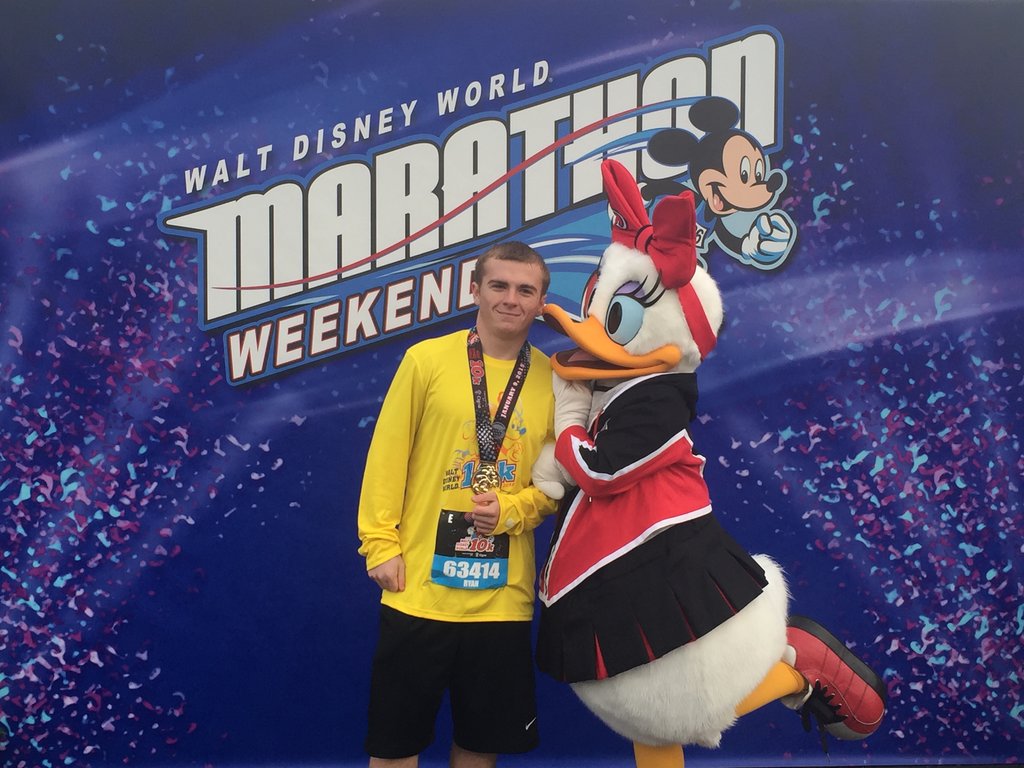 In January 2014 I heard about runDisney and all of the great things they do, particularly Walt Disney World Marathon Weekend. I had never done any type of race before but a Disney race really interested me. After reading trip reports and blogs about the 2014 marathon weekend and hearing about a distant relative’s experience I was set on doing it in 2015. The next part was picking the race. WDW marathon weekend has 4 races and 2 challenges: the 5k (3.1 miler), which is a family race, the 10k (6.2 miler) which is more competitive, and the Half and the Full marathons are the most competitive. The two challenges they have are the Goofy and the Dopey. The Goofy is for someone who runs the half and full marathons. The Dopey is for those that run all four races and they are both extremely popular. Knowing I had never done any long distance running before, but wanting to give myself a challenge I went with the 10k. Registration was in April and they sold out fast; the 5k sold out in a couple hours.

Now that I was signed up and ready to go it was start planning a trip and training for a run. I looked around at some different 10k training plans especially the RunDisney ones and knew I would at least have to run a few times a week. I started in late summer and early fall running 2-3 miles for a while and then working my way up. Once winter hit in Wisconsin where I am from I had to run on a treadmill instead of outdoors, which to me is not as fun as running outdoors. No one in my family is a runner so I was really on my own with figuring out how to do this. I did look at a lot of threads on the DISboards for how marathon weekend worked and that helped a lot.

We stayed at Port Orleans Riverside.  During marathon weekend all of the Walt Disney World Resorts offer transportation to and from the race expo and the races. The transportation is all done by runDisney and is all on coach buses that run very frequently. Prior to arrival, runDisney lets you print out your waiver for the race to save you time at the expo. If you forget, they do have places for you to print them out. The Race Expo is held at the ESPN Wide World of Sports complex. You go to the HP pavilion to pick up your bib and then to the Jostens center for your t-shirt. Both building have merchandise locations and vendor boths. The Jostens center has a lot more than the HP pavilion. I went on Thursday the second day of the expo and late in the day it seemed like a good time to go because no one was really there and there weren’t many lines.

runDisney merchandise is extremely popular. For the 5k and 10k they do not have a whole lot but I bought a pin for the 10k. I was also interested in the runDisney MagicBands but they were sold out very early. One of the most popular merchandise items for the expo is the runDisney New Balance shoes. This year they had the four designs from the previous year and two new designs that were supposed to be retro Mickey and Minnie but the new ones seemed a bit too plain to me. The shoes were sold out in most sizes but I got lucky and got a pair of the Goofy-themed ones in my size. Another popular item is the marathon weekend Dooney and Bourke purses. Outside the buildings there are more vendors set up and backgrounds set up for photo ops.

The next big thing is race day. Bus transportation starts at about 3:30 AM at the resorts, so I was up by 3 and out the door by 3:20. Before I left, I had a bagel, banana and a Clif bar. One thing to make sure is that you eat something and stay hydrated but don’t overeat or eat junk food before the race. Once we got to the Epcot parking lot where the race started, it was quite cold so lots of people were heading into a heated tent. Outside they had rows and rows of port-a-potties and a DJ playing music. Once 5:00 AM hit it was time to head to the corrals. For the 10k they had six corrals. They are lettered starting with A and so on. The wheelchair racers start about two minutes prior to the start time. Then corral A starts at the start time. Every other corral is released somewhere between 5-10 minutes after the previous one. Once on the course and everybody is moving you start to warm up and get a pace going. Along the course they have all sorts of things to see. Characters are all over the course for pictures and people are everywhere cheering you on. Every mile marker is themed to a Disney movie and the best part is that you get to run through a Disney park. I have to say that running through Epcot early in the morning with the torches turned on and Cast Members all around cheering you on was one of the coolest things I have ever done. Also on the course you get to see a lot of things not normally seen because the courses take you backstage. One more important thing they have along the course is water stops. Disney makes sure you are hydrated during your run. The finish is probably the best part because you finished, you made it, you earned yourself a medal and you can wear it with pride. runDisney gives you your medal, a treat box with healthy food for after the race, water, and Powerade. You also have a chance to take photos with characters after the race. Once you finish and earn that coveted medal, make sure to wear it in the parks and other runners, guests, and Cast Members will congratulate you on your accomplishment all day. Now that I can cross a runDisney race off my bucket list it just makes me want to do it again. That race made me want to run more races and strive to do one of the runDisney challenges. For the Disney addicts out there, runDisney is definitely a way to feed your addiction even though it will probably only get you more addicted like it did to me.