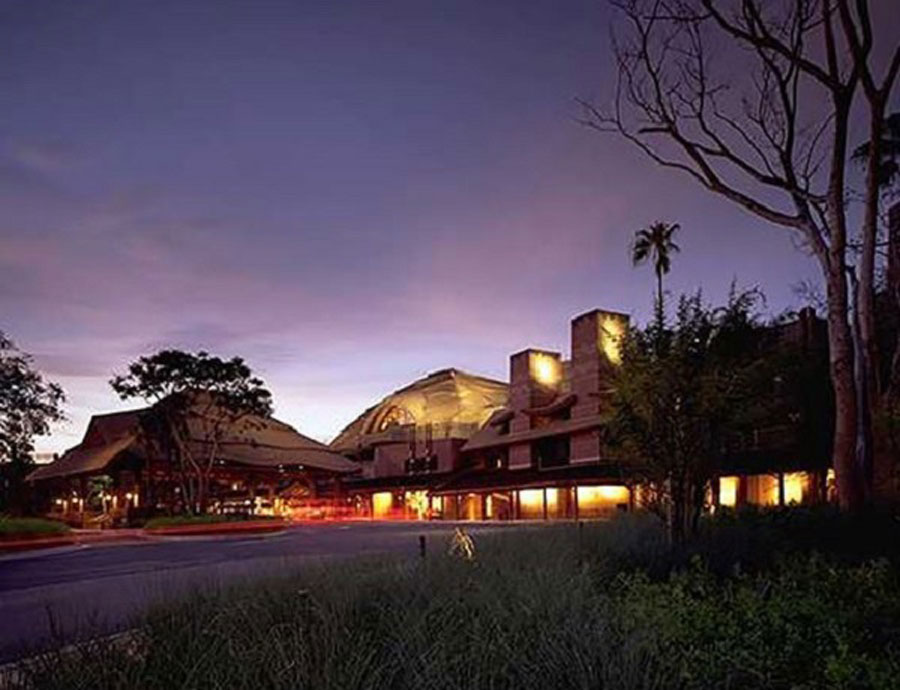 In part one of A Trek Through the History of Disney’s Animal Kingdom Lodge, we took a look at the architecture and lighting that makes this resort so unique. Now we’ll look at two more aspects that contribute to the amazing aesthetics of the resort — the interiors and the lighting.

International luxury hotel and resort designer Todd-Avery Lenahan, founder and principal of TAL Studio [ABA at the time], was the interior designer of Disney’s Animal Kingdom Lodge. He was responsible for creating the lobby’s hard and soft furnishings.

Many patterns and designs from actual African villages inspired the design for the resort. “There are so many throughout [Animal Kingdom Lodge], but there is a common thread,” said Lenahan. “A degree of authentication that occurred with many of the details and patterns found throughout.”

Today, Lenahan is the founder and principal of TAL Studio. Located in Las Vegas, Nevada, “TAL Studio is the premiere luxury hospitality design firm in the nation,” as per their press kit, “and one of the most innovative and diverse hospitality and entertainment design practices commissioned by today’s most respected luxury hotel developers and operators.”

Prior to founding TAL Studio, Todd-Avery Lenahan was with The Walt Disney Company as a Principal of Design and Interior Architecture for Walt Disney Imagineering. He was instrumental in executing much of the iconic work developed during what was critically acknowledged as the “Disney Decade” of the 1990s, in which the company provided great patronage.

Reflecting on his career at Disney, Lenahan said, “My career at Walt Disney Imagineering was an extraordinary experience at an exemplary world-renowned company. I earned a position in it the way that the prior generation of Imagineers did but that is rarely, if ever, done today.  I was in a management training program and had to work in a multitude of company operational departments before even being able to begin with the design group. After fulfilling my daytime job responsibilities in operations, I worked at night in the Architecture & Facilities Engineering department. My work was noticed, so I was brought into the Disney Development Company which was created during the company’s major expansion era under Michael Eisner.”

“When Disney Development Company and Walt Disney Imagineering (the resorts division and parks division respectively) were consolidated, several of the DDC personnel were transplanted into the older Imagineering group as a way of cross-pollinating the two cultures. Fairly soon, after the consolidation, I was promoted to Principal of Design & Interior Architecture and relocated from the Glendale WDI Campus onto The Walt Disney Studios lot in Burbank.  Along with Roy Disney and Wing Chao, the three of us were fortunate to be given the honor of working out of Walt Disney’s original office suite — definitely hallowed ground. The breadth of what I worked on and was responsible for is too much to list with any degree of brevity. Disney is still a very dear and important client today and we’re working with Imagineering on multiple ongoing projects, some of which are strategic efforts that over-arch design.”

“I am honored to have designed such a space that lives on and gives great joy to so many today for its creativity,” continues Lenahan. “To this day, we continue to create projects for Disney and from the time of Animal Kingdom’s creation, we have delivered seven more projects. We currently have four additional projects that are opening in Walt Disney World in Florida, one in each of the major parks; Magic Kingdom, Epcot, Disney’s Hollywood Studios and Animal Kingdom. Can’t speak of them just yet but they will be very special.”

“All furniture pieces were inspired by African culture,” said Lenahan. “Western furniture is not used in parts of Africa so we took inspiration from different cultures, regions and materials and created pieces that were evocative of the various aspects of true African life.”

The African village theme is carried all the way through to the guest rooms. Every guestroom is furnished with handmade furniture from Zimbabwe including carved headboards inspired by African butterfly masks, richly colored tapestry bedspreads and draperies, and authentic artwork. “The influences were nature — and the influences were broad,” said Lenahan. “The whole Animal Kingdom Park is an exploration of the entire continent.”

“The building had a grand interior volume,” said Lenahan. They had to “execute what was required for contemporary methods while keeping our goal of having the building appear authentic in its craft and detailing. There was rigorous work done that would forgive the dependence upon modern details.” Mr. Lenahan certainly achieved this and more. The Animal Kingdom Lodge immerses the guests into the African safari adventure while providing a warm, welcoming, and comfortable environment.

“Hundreds of pieces of authentic sculpted African art and a rare ceremonial mask towering 16 feet add to the cultural splendor and mystique of Disney’s Animal Kingdom Lodge,” said Tate Boles. “Inside, sculptures and carvings tell stories of man as predator and prey and of companionship and interdependence between man and animal.” Some of the art include:

3.       Ethnographic – (Mask, Human /Antelope, Guro People) Danced to show that the power of youth is as robust as the power of a wild antelope.

5.       Ethnographic – (Head crest, Ejagham People): Worn by a member of the Ekpe Society to intimidate and punish anyone who has broken tribal law.

Guests will notice that the railings on the outside of each of the guest rooms are in a different colors. This was done for the very same reason why the landscape grading changes. According to Johnson, “this is a technique to scale down the size of the hotel. It is to make the lodge feel more intimate and provide smaller areas of engagement for guests. Animal Kingdom Lodge is experienced in layers, from approach, arrival, entry, and accommodation.”

“The live animals had a major influence on the design of the lodge,” said Johnson. “The in-person experience of seeing the animals in the African game parks strengthened the connection to the live animals on the site. Of course, a zoo consultant was hired to ensure that our designers were maintaining animal well-being.”

When asked if there was one thing that was interesting about Disney’s Animal Kingdom Lodge which most guests would overlook, Tate Boles said it would be the Igbo Ijele Mask.

“The breathtaking Igbo Ijele (pronounced e-bo e-gelay) mask, which is displayed in the lobby of the resort, is a stunning example of African art on a grand scale. The Ijele, created by the Igbo people of Nigeria, is a massive creation that stands about 16 feet tall and is eight feet wide. In Africa, the mask signifies an important event or celebration and makes rare appearances. No other Ijele, which is the largest mask in tropical Africa, is known to exist outside of Igbo land. The person wearing the mask, who goes through physical and spiritual preparation for the event, goes under the framework, aided by followers to steady the mask. The Ijele orchestra, which consists of a line of drummers, flutists, dancers and singers, prepares the crowd. The mask is preceded by a male dancer and followed by the orchestra. It begins its movement slowly, but during the 15-minute ceremonial dance, the Ijele is always majestic, enforcing his image as the king of masks and a figure of supreme mystical authority. The Ijele moves with agility as its large body goes forward, backward, side to side and in semicircular turns from left to right, going back into an enclosure.”

The Maasai Bridge, a rope suspension bridge stretches across the lobby.
The bridge allows guests to cross the lobby, from the fifth floor, at treetop level.
Photo: D23

Aristotle is credited with the saying, “The whole is greater than the sum of its parts” and that is certainly true with every part of Walt Disney World — including the Animal Kingdom Lodge. Typically, guests are aware of the physical building, as well as the beautifully themed interiors. Another part that factors into the whole is the lighting. Lighting is something that guests are almost never aware of — when done correctly it compliments and supports the surroundings, however when it’s not done well, it’s very noticeable.

Howard M. Brandston, Robert Prouse, and their team were responsible for the interior and exterior lighting at the Animal Kingdom Lodge. Brandston was interviewed by a team from Disney and 4240 Architecture, and based on his numerous experiences in Africa, was chosen for the job.

Brandston and his team did not receive any input regarding the lighting from Disney. They took ideas and direction from 4240 Architecture. “Their [4240 Architecture’s] input was the motivating spirit of what we sought to achieve to support their vision,” said Brandston. “The process of designing the lighting is to sift through notions for each space until these ideas could be put together into a total conceptual design that could be presented for approval.” Brandston Partnership Inc., (BPI), had input on many of the lighting choices including the shield-like chandeliers and the large sculptural newel posts.

Using only white lights, surprisingly, the only consideration when lighting the animals on the Savannah was that they had to be visible.  Conservation is the one thread that runs through the entire Animal Kingdom complex and the lighting was no different. “Energy conservation in lighting is a primary concern of the BPI practice,” said Brandston. “We even helped write the lighting portion of the first energy code.”

Interestingly there were no lighting or special effect tricks used in designing the AKL lighting. Brandston said, “A design determination is made.” They ask the client, “What is it you wish to see?” and their answer tells you exactly where the lighting should be. They also didn’t hide or conceal any lighting as that would not have been in keeping with the reality of Africa.

Lighting the interiors, particularly the restaurants and bars, followed a pretty simple rule: make everything look good. They made sure that any artifacts in the restaurant were properly lit and they made sure that “the lighting of the restaurants focused on making the clients look good,” said Brandston. In addition to lighting the artifacts, naturally, they insured that the food was clearly illuminated. They also applied this same principle to the exterior lighting.

The exterior lighting, including the landscaping, was set to a “visibility highlight for each zone.” Featuring what needed to be seen and the team created a lighted pathway guide from one area to another. Thereby, BPI insured that anyone who was wandering the site were able to see each other “in a pleasant and flattering way.”

“We loved working on the Animal Kingdom Lodge project,” said Brandston. “It was a joy to work on with a talented, creative design team with a clear understanding of creating a scene to give a sense of being in Africa. This was an opportunity to recreate some of the first-hand experiences we had in personally wandering the wilds of the continent.”

In our final part, we will look at the details of the Animal Kingdom Lodge’s landscaping and the addition of the DVC.