A Defense of Na’vi River Journey 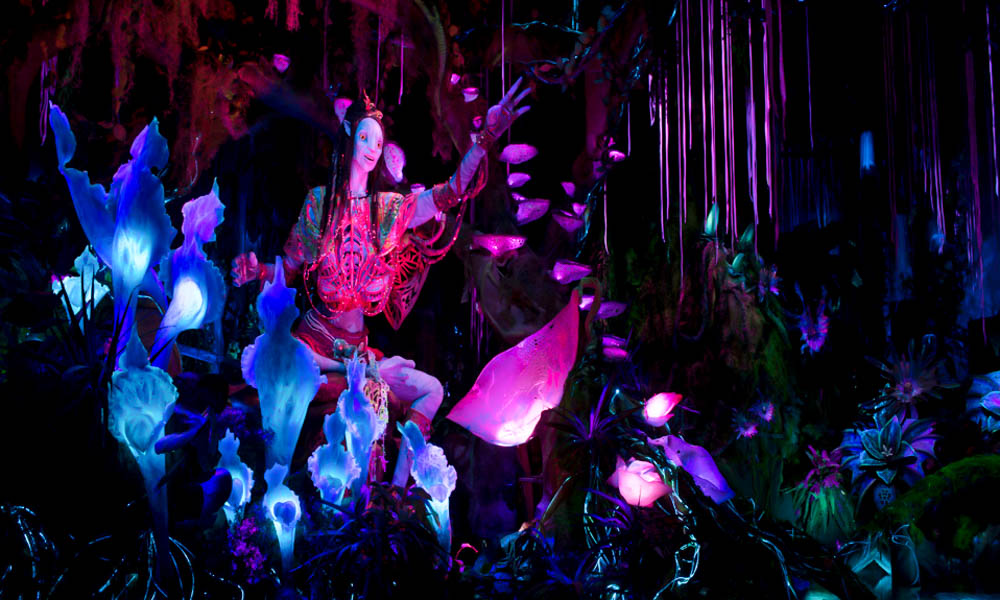 Na’vi River Journey is located in Pandora — The World of Avatar in Walt Disney World’s Animal Kingdom. This is a boat ride which takes guests through floating mountains and bioluminescent forests to the Shaman of Songs. Those who embark on the attraction enjoy a ride on a unique vehicle through a cool, quiet feast for the eyes.

Pandora has for the most part been an absolute hit, rated one of the world’s greatest places, and FastPasses for its other attraction — Avatar Flight of Passage — are some of the most desirable on property. However, in its shadow lies Na’vi River Journey. Now, this attraction is by no means neglected or an overlooked walk-on such as the People Mover, but is often criticized for its queue, length, lack of story, and for simply not being worthwhile.

So why does it need to be defended?

While many attractions, such as the pathetically inadequate Alien Swirling Saucers, deserve hefty criticism, this attraction does not. With some of the finest immersion on property, stunning visuals, and serene ambient music, Na’vi River Journey represents everything a Walt Disney World attraction should be.

Pandora -The World of AVATAR opened on May 27th, 2017 and has been undeniably popular and beloved. It includes the two previously mentioned attractions, as well as Pongu Pongu and Satu’li Canteen for dining and Windtraders, the merchandise location. Delicious food, interesting treats, and sights which defy the law of gravity serve as showcases for the absolute epitome of the magic of the World of Disney. Based on the movie Avatar, the land immerses guests into a fantasy world of the Valley of Mo’ara.

Na’vi River Journey begins as one walks to the back of Pandora, and guests begin to approach a grotto. The queue includes intricate weaving and descriptions of some of the creatures of Pandora. A totem woven by the Na’vi (the humanoids who reside in this realm), invites those to venture forth. A nice added plus is a water bottle filling station. This queue is a monument to the Shaman of Songs who attracts the wonderful animals of the world of Pandora to her.

Once guests get to the river, they board beautiful reed boats, which have two rows. While these have been criticized as slowing the boarding of the attraction, they allow for a more intimate riding experience. Guests immediately enter a lush bioluminescent rainforest full of creatures both unique and familiar, such as frogs and jellyfish-like creatures. The rainforest glows in blues, greens, purples, and pinks — a color palate unique in Animal Kingdom. All of these creatures and those in the boat are being summoned to the Na’vi Shaman of Songs.

The ride is friendly for all ages, those of all sizes, and of all abilities. It is slower paced, peaceful, and tranquil. Na’vi River Journey is meant to be a musical, composed experience. Imagineer Joe Rodhe, amongst many others, designed the attraction to be uplifting and to soften the edge and rugged adventurism which pervades the rest of the park.

The focal point of the attraction and destination for guests is the Shaman of Songs. This is one the most technologically advanced aspects of any Disney attraction. The Shaman of Song is stunning, and so lifelike, many have believed it is computer animated as opposed to an animatronic.

Dark and cool, this attraction provides a quiet respite and escape from the hot, buzzing hive Animal Kingdom can become.  While there are other opportunities to cool down, such as It’s Tough to be a Bug or Finding Nemo – The Musical, these are not serene shows.

As intended by the Imagineers, the attraction is meant to be an ambling, slow, soothing jaunt through another world where everything and anything can glow and one appreciates the world around them. The detail which is too hard to take in during the ecstasy of Avatar Flight of Passage can be enjoyed on this attraction. No better combination of attraction exists in Walt Disney World.

The attraction is short, at about 5 minutes in length, but is not dramatically shorter than other attractions on property. Space Mountain lasts 2.5 minutes, and Frozen Ever After also clocks in at 5 minutes. So while it could probably be longer, its brevity is not an egregious offense. And while the theme or story of the attraction is absolutely subtle, this does not take away from its beauty.

No attraction is perfect, but Na’vi River Journey comes pretty close. While still popular, it is the recipient of substantial criticism. Perhaps it is because of its perceived brevity? Or more likely, it is totally overshadowed by its neighbor, Avatar Flight of Passage. With an immersive and unique queue, gorgeous bioluminescence, and a natural animatronic, this attraction epitomizes everything which makes Walt Disney World magical.