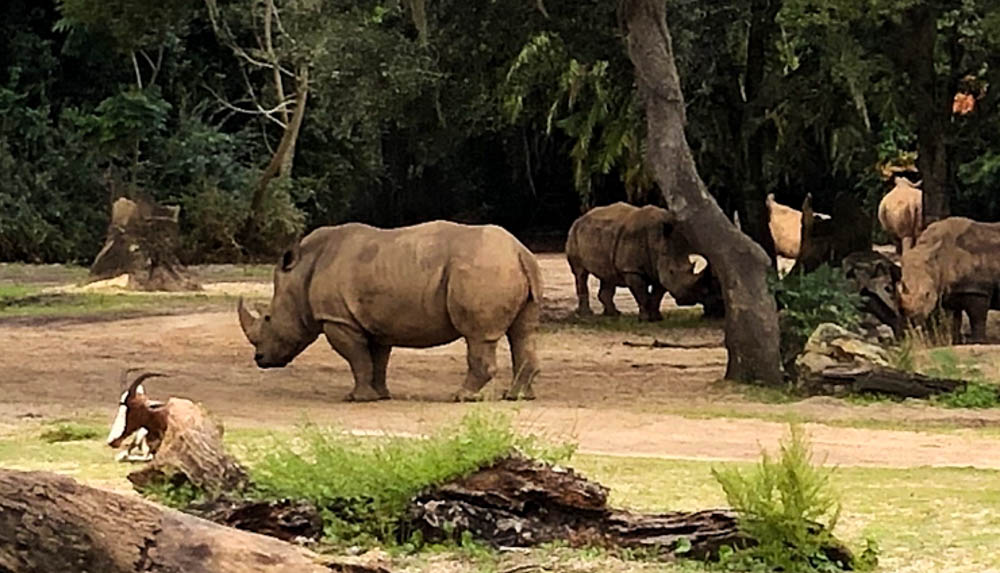 On November 1st, 2018 Walt Disney World started an all new backstage experience at Disney’s Animal Kingdom called Up Close with Rhinos. This all new tour gives guests a chance to go up close and learn more about the mighty rhino. The tour is an hour long and costs $40 for regular guests; however, Annual Passholders do have the chance for a discount which comes out to about $34. Disney also mentions you may get the chance to actually touch a rhino during the tour.

That of course is subject to the animals willingness.

I had the opportunity to check out this new tour on November 5th, 2018 during its first week of operation. Guests check in at the tour check-in desk just outside the entrance to Kilimanjaro Safaris. Disney recommends that guests check in at least 15 minutes before the tour is scheduled to begin. At this time Disney is only running one of these tours per day, at 11:00 AM. Guests are allowed to bring bottled soda and water along with them, however, no photography is allowed at all. This is due to the fact that the tour is 100% backstage.

Disney does not allow any photography backstage. I was a bit disappointed in that aspect at first

The tour size is roughly 14 people. Guests are taken backstage near Kilimanjaro Safaris and led onto a small bus that takes guests to the rhino enclosures. The bus is wheelchair accessible if needed. To give you an idea of where this is, if you ride Kilimanjaro Safaris the enclosures are behind the cheetah area. Both the rhinos and cheetahs are housed in the same area. A guest on my tour asked if the two types of animals get along and the animal care specialists told us they get along just fine and often don’t care that one another are there.

Once brought through, the the Rhino enclosure’s guests disembark the bus and are brought just inside the doorway to the enclosure. Inside they have a rhino skull on hand, as well as paintings on the wall showcasing the several different species of Rhino around the world. If I remember correctly Disney only has two species of Rhino. The one we discussed most and met on this adventure was the white rhino. The skull we saw was of a white rhino, and an interesting fact I learned is that white rhinos do not have front teeth.

We did meet Hairy Helen though! Helen gets her nickname because of her hairy ears. The animal care specialists told us about Helen and her daily routines as well as things about her nutrition. Once Helen was calm with us around, the care specialists gave us a chance to get up close with Helen. Two at a time they let us pet her. At first she felt a bit like leather or sandpaper. The care specialist said a guest gave them the description of a hairy basketball, which is pretty accurate. I thought her skin would have been more soft or smooth but it’s very rough and thick.

Every guest gets the opportunity to touch the rhino if they want. Guests must wash their hands after doing so as well. Once everyone was done they brought out the other female white rhino — Lola! The two interacted by rubbing their heads together and grunting or “talking” to each other. The care specialists also passed around one of the rhino toys, which is like a giant plastic dog toy. This has a ball inside and also allows them to put food inside for the rhino to try and get it out. It’s all about stimulation and giving the rhinos challenges. One of the care specialists brought the rhinos close to the side so we could see their mouths. The rhinos opened their lips and you could clearly see they have no front teeth like the skull we saw earlier showed.

At the end of the tour the specialists let us know that 100% of every dollar paid for the tour we were on would be going directly to rhino conservation. The Caring for Giants tour is similar in that the money from that tour goes to elephant conservation. I was very happy to contribute to conservation and it is one of the big reasons I love Disney’s Animal Kingdom. We were also given time to ask any final questions before heading back to the bus. The tour then concluded and we were allowed to keep our name tags if we wanted.

If someone asked me whether I would do this tour again I would say yes. I found this tour, while short and restricted to backstage, very much worth it and an incredible experience. It is not every day you get to actually touch a rhino. My biggest criticism would be no onstage experiences for photos. That likely would cost more and take longer but I would pay it if given the option. I think Disney and Animal Kingdom offer some incredible tours that everyone should check out if given the chance.