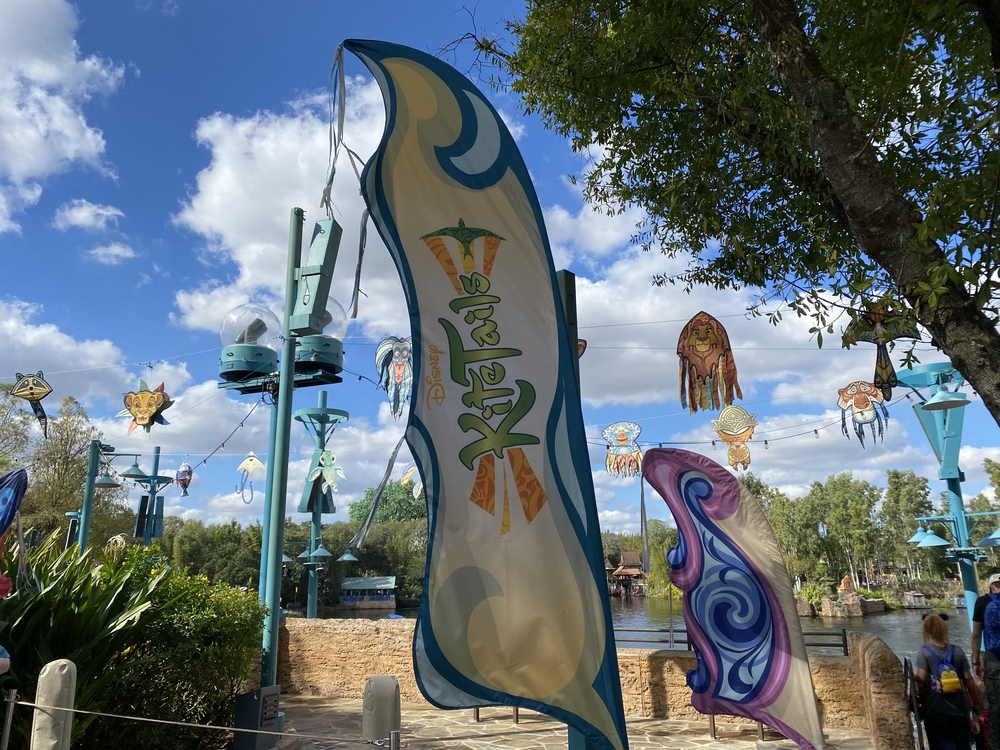 Disney KiteTails debuted at Animal Kingdom on October 1st for the 50th anniversary of Walt Disney World. Since the show opened, it has gotten mixed reviews; mainly bad reviews. While watching clips of the show that surfaced on the Internet, I started to see why people thought it was bad. The show seemed to lack that polish that Disney entertainment has. The show seemed like a last-minute thought that didn’t get finished. But I have to say that the videos clips on Twitter made me laugh. Maybe that’s the point. Today will be the first time I have seen it in person, and I can’t wait to see what this show entails.

The pre-show is very cute and consists of characters from The Little Mermaid and Finding Nemo. During the pre-show, the performers look so happy to be part of this show and embody the character puppets they are holding. This part is a great way to keep the kids in the audience entertained. Before the show begins, they warn the audience that what goes up must come down. This warning is essential because the kites do fall over at the end of each section.

More performers fill the theatre and celebrate The Jungle Book as the show starts. As the performers dance, a big blue bear appears from the corner of my eye. It’s Baloo in the sky! He looks like he is just lying down and being dragged, but it’s pretty funny. As Baloo finished his section, he was taken to fall over in the stands, and that part was not so magical. The elephant section, though, is very cute and fun. The monkeys followed right after and performed the song “I Wan’na Be Like You” from Jungle Book. As they came out, King Louie got ready for flight. The King Louie kite is a little frightening; it looks like he is going to eat the jet ski that’s pulling him. The music in the section was great and had the audience clapping the whole time.

As the show ended, many families around me said, “that was great” or “that was cool.” I think the concept was a good idea. All the moving parts, like the performers in the theatre, the jet skis, and the kites, are a lot to keep guests entertained. Of course, we always remember the parts that shocked us, like seeing Disney characters diving into the stands to make a landing. I do have to say that I wish the kites looked better and less scary. I can’t say that I think Disney did the best with what they had, but it’s a fun, quick show that will keep kids entertained. The show lasts about 15 minutes, which is a reasonable amount of time to sit a take a break from walking, and as I write this, it’s only about 70 degrees outside, so it feels great. But in the heat of summer, I know it will feel like the sun is sitting right next to you.

All in all, I think the show is cute and fun for kids and their families. I don’t believe this is the best they could’ve done, and I wish they could’ve incorporated one more scene with live performers on a float or something of that nature. After watching the show, I still think it lacks that Disney entertainment polish that we see in most shows. I have to say, though, that this show had me smiling and laughing the whole time. The laughing was mainly due to how the kites looked as they fell out of the sky and onto the theatre. My favorite part of the show was the performers that came into the theatre. I feel like it added an extra layer to the show. If you have 15 minutes to spare in your day or want a good laugh, I recommend seeing this show at least once. I don’t think I would come back again to see the show, but I’m glad I saw it. KiteTails is the type of show you can watch while passing the lagoon area on your way to Dinoland USA or Expedition Everest.

Let us know what you think about KiteTails in the comments below!