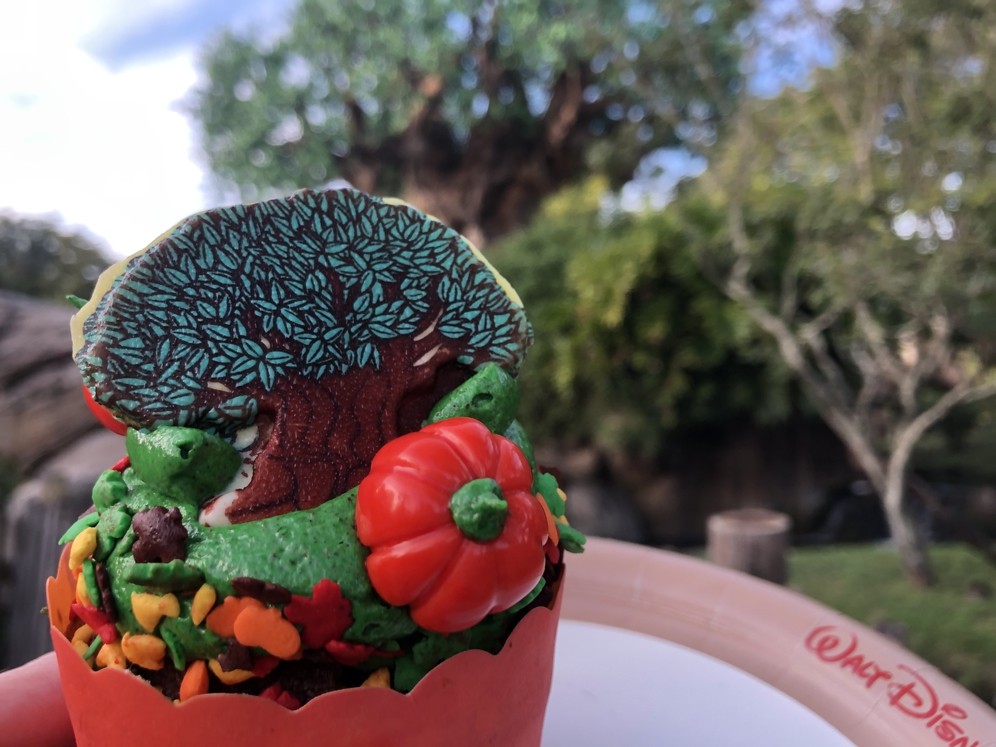 The holidays officially arrived at the Walt Disney World parks this past week, and, along with the holiday celebrations and festivities, we've received a slew of new seasonal snacks. Not to be lost in the shuffle is a harvest-themed treat that's being offered in Disney's Animal Kingdom: the Autumn Tree of Life cupcake.

Let me tell you right off the bat: I ate the whole thing. That should let you know exactly what I thought of this special snack. Now, let's dive into the sweet details.

The Autumn Tree of Life cupcake ($5.99) can be found at both Restaurantosaurus in DinoLand U.S.A. and Flame Tree Barbecue in Discovery Island. It can be purchased via the mobile order feature in the My Disney Experience app (you'll find it in the Holiday Exclusives category).

The cupcake itself is pumpkin flavored and features toffee cheesecake filling in the middle. The frosting is a cinnamon buttercream, and is topped by a white chocolate Tree of Life piece, two fondant pumpkins, and colorful fall-themed sprinkles.

The pumpkin cake in the cupcake is lovely; moist and flavorful. It was clear that care had been taken to ensure that the cake was really good and not simply a vehicle for the frosting.

Speaking of the frosting, there was gobs of it. The cinnamon flavor of the light and sweet frosting paired beautifully with the rich pumpkin taste of the cake portion. The Tree of Life piece was more for looks than taste, and, if you've had fondant, you know that the fondant pumpkins didn't have much of a taste, but in the grand scheme of things, that was a-okay. The treat was beautiful, and worth the money spent. And I'd purchase another in a heartbeat.

This seasonal cupcake is one not to be missed. If you're in Animal Kingdom this month, please swing by and order one. And then please let me know what you thought.