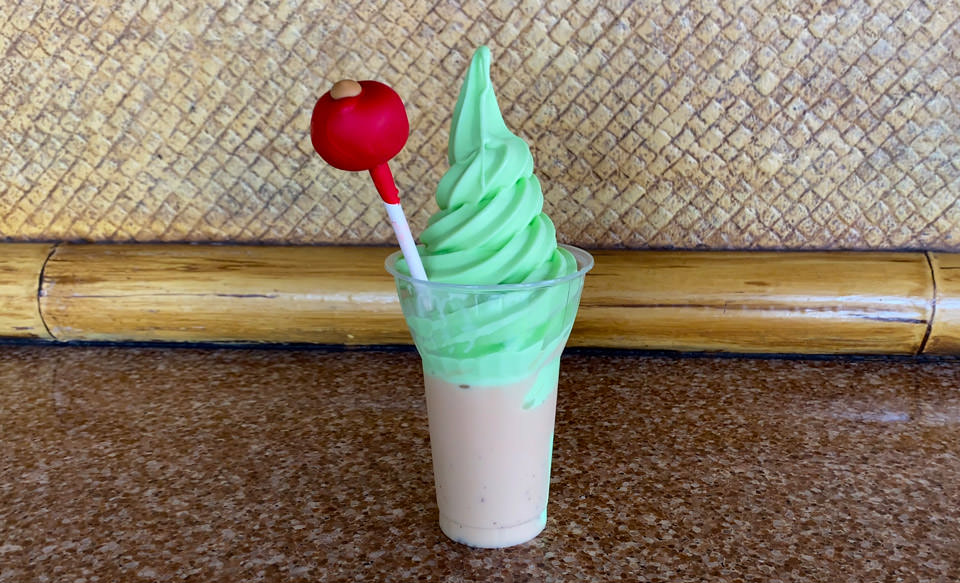 The Pistachio Chai Tea Float is pistachio soft-serve sitting atop spiced chai tea and topped with a red velvet cake pop. It costs $6.49 and comes out to be $6.92 after tax. If you're looking for a dessert that's brimming with holiday spirit and tends to be more creamy and sweet than the refreshing, tropical flavors offered, such as Dole Whip, then you'll be very happy.

The pistachio soft-serve has a slight nutty taste with a milky texture and a bit of sweetness, but not on the level of many other treats you can find at Walt Disney World. The spiced chai tea appeared to be frozen when served, but warmed up quickly. If you've ever had a gas station chai tea latte then you've had this before. Really sweet and milky with slight hints of cinnamon, but mostly sugar. The cake pop was your standard red velvet cake pop. It wasn't necessary, but fully enjoyed.

I'd be more likely to pick up a Citrus Swirl or Pineapple Dole Whip on return trips to Magic Kingdom, because I typically like citrus or tropical flavors on hot days, but I could see myself getting the Pistachio Chai Tea Float again. It would hit perfectly on one of those December Florida days where there is plenty of sun and the temperature is in the mid 70s, but will possibly dip into the 50s at night and you just need something cold for those couple of hours where the sun is burning, but you don't want to lose the holiday spirit. Yeah, that's the right time for this float.