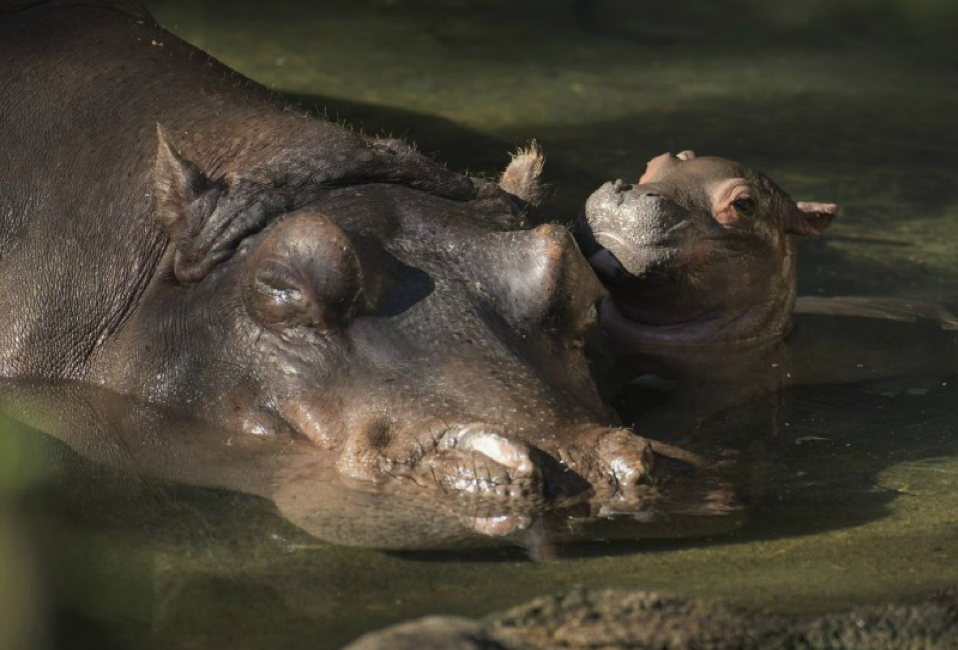 In a previous article, we went on a journey through the Little Ituri Forest on the Kilimanjaro Safaris in Animal Kingdom’s Africa. We explored a forest full of serene animals looking to blend in and survive in a chaotic jungle. We are now moving on to the Safi River, where we must tread carefully.

We first see the Nile Hippopotamus. Hippopotamus live throughout Sub-Saharan Africa in rivers and lakes. Today, they live primarily in protected areas and are a vulnerable species. Adults generally weigh between 2,500 and 5,500 pounds and are the third largest land mammal behind elephants and rhinoceros. Their population can easily be corralled with ditches and fences. While traversing through the Harambe Wildlife Reserve, we mostly see them firmly in the water. They prefer to live close to shore and will lay on the shore when people are not around. I have seen them standing on the bank on cooler days, and it is always an impressive sight. Unable to sweat, staying in the water keeps them cool.

One fact frequently recounted on the Safari is that Hippos are one of the most dangerous animals in Africa. Aggressive animals, they can run up to thirty miles per hour. With large teeth and tusks, Hippos are one of the deadliest large land mammals on earth. About 500 people are killed a year in Africa by the animal. Their jaws can crush a canoe and weight suffocate a victim. Agitation and aggression occur when they are defending their territory and young. Hippos go from seemingly calm animals to formidable predators instantly.

At least two calves have been born at Animal Kingdom in recent years. Augustus, born in 2018, was the first hippo birth in the Park in 13 years, growing to over 800 pounds in his first year. Newborn calves can weigh between 50-100 pounds. Mother and calf are tightly bonded. They remain with their mother till about age seven or eight.

As our journey along the Safi River continues, it becomes no less treacherous as we meet the Nile Crocodile. These reptiles reach 16 to 20 feet in length and have a diet mainly consisting of fish and zebra, hippo, and migrating wildebeest. Females can lay 25-100 eggs at a time, guarding them as they incubate. Extremely dangerous, the Nile Crocodile has a bite over three times more powerful than a lion or tiger. Loud raspy vocalizations and hissing make them one of the chattier reptiles in the animal kingdom.

Normally seen lying on the riverbank, Nile Crocodile can be quite aggressive and lively. Medical procedures are sometimes available for viewing by guests at Rafiki Planet Watch’s Conservation Station. In February 2018, a Nile Crocodile who had lived at the Park since its 1998 opening got into a fight and lost the lower half of one leg. At least 15 feet in length, extensive damage to the crocodile’s leg required an emergency amputation of the foot. Surgery lasted from 11:30am to 1:00pm.  Injuries of this kind are common amongst crocodiles, and normally their blood vessels will seal off an injured limb. The veterinary staff at Animal Kingdom chose amputation, so the crocodile did not need to drag around a damaged foot.

Great Migrations, a series available on Disney+, includes crocodiles in the first episode, eating wildebeest on migration. The viewer can see their power and massive size. Aspects of the show are rather graphic. Also, an American Crocodile in DinoLand U.S.A. is available for closer viewing.

Pink-backed pelicans reside on an island in the middle of the Hippo habitat and live comfortably among them. Their backs turn light pink during mating season. Both parents incubate eggs for about 30 days, and chicks grow feathers after 70-85 days. Pelican can fly for 24 hours, covering up to 300 miles at a time non-stop. Pink-backs are one of the smallest pelican species, with a 7 to 9.5-foot wingspan and a bill length of 11 to 15 inches. They live throughout Sub-Saharan Africa, as far south as Botswana. Their range includes the western edge of the Arabian Peninsula. They nest in trees in or next to permanent sources of water and food, such as the Safi River. Pink-backed pelicans are not a threatened or vulnerable species.

Vultures seen around the river have nothing to do with Africa. These are Black vultures, one of two species native to Florida. They are distinguished from the Turkey vulture by a black head, relatively straight wings, and a shorter, broader tale. Black vultures like to line the fence between the Safari vehicle and the river, often fanning their wings. They can seem unappealing or even threatening. But they serve a vital purpose: eating dead animals. The Black vulture is more aggressive, sometimes killing injured or incapacitated livestock. The species are protected under state and federal law as migratory birds.

Vultures native to Africa are generally three to four times bigger due to the size of carcasses they must consume in the Savanna. Lappet-faced vultures can be seen on the Discovery Island Trails, and Ruppell’s griffon vultures live at Animal Kingdom Lodge. If one enters the Discovery Island Trails across from Creature Comforts and begins to pass the Tree of Life, true African vultures live amongst the kangaroo and are quite a sight!

The Safi River is visible above on the Wild Africa Trek, a tour offered at Animal Kingdom taking guests backstage in the Wildlife Reserve. Bridges overhead allow guests to safely cross over the river and see these animals from a different angle. I have never been able to go on the Trek as it is always booked, but according to my sources within the travel industry, last-minute cancellations are common. The three-hour small group tour is $199, and bookings are available through the Walt Disney World website. On the Gorilla Falls Exploration Trail, one can also see Hippos underneath the water. Animal Kingdom Lodge’s Arusha Savanna hosts a large group of Pink-backed pelicans.

Next, we shall transition to the Savanna!

Have you ever done the Wild Africa Trek? Did you feel the experience was worth it? Please feel free to leave a comment!