Let’s Take a Journey into the Little Ituri Forest on Kilimanjaro Safaris at Animal Kingdom! 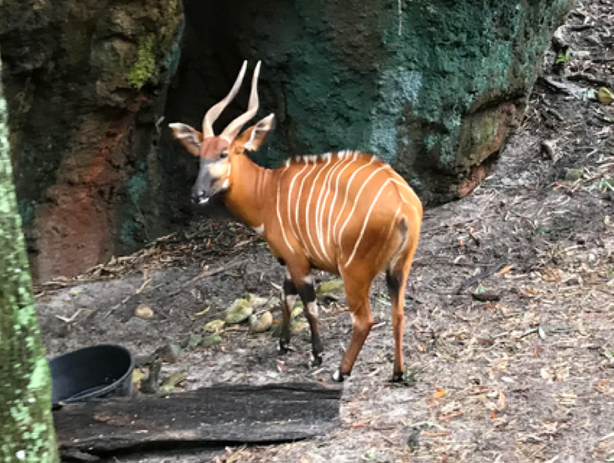 Kilimanjaro Safaris is located in Animal Kingdom’s Africa, immersing guests in the Harambe Wildlife Reserve. The 110-acre savanna hosts 34 species of animals. This attraction is one of my favorites, and by taking guests in a safari vehicle across various habitats, every single ride is unique. Safari guides provide narration which may change depending on which animals are visible. Cast members have limited time to share information, and therefore many fascinating facts do not reach the ears of guests. Therefore, let’s enter the Harambe Wildlife Reserve and learn more about the amazing animals which live there. We will first learn about the inhabitants of the Little Ituri Forest and continue our adventure in future articles!

This shaded area is based on the actual Ituri Forest located in the Democratic Republic of the Congo. The real forest is about the size of West Virginia. Here we see Okapi, Bongo, Greater Kudu, Saddle-Bill Stork, and Black Rhinoceros.

Okapi generally have a life expectancy of 20 to 30 years. Classified as endangered, these shy and reclusive animals are difficult to spot in the wild. Oily and velvety fur is designed to repel water. I always thought they looked extra shiny!). Eighteen-inch dark blue prehensile tongues help them strip leaves from plants. They can eat toxic plants and fungi, along with charcoal and clay which absorb the toxins and adds minerals to their diet. Their large ears move independently, allowing the animal to stay alert to predators for all angles. Low-frequency calls, undetectable to predators such as leopards and humans, warn other Okapi of danger.

Okapi are quiet and discreet and have adapted expertly to their jungle environment. As a result, their population in the wild is almost impossible to count. Okapi generally produce one offspring at a time, and at least two have been born at Animal Kingdom Lodge. The Disney Conservation Fund participates in the Association of Zoos and Aquariums (AZA) Species Survival Plan and works with the Okapi Conservation Project, helping to project the ungulate.

They can also be seen early in the Gorilla Falls Exploration Trail from a relatively close distance. You can really see their shiny coats and sometimes even hear them eating. Okapis are also visible at Kidani Village’s Pembe Savanna. The Pembe Savanna is located at the end of a pathway leading to Kidani’s pool and bar area at Animal Kingdom Lodge. It includes other unique animals like red river hogs.

Within the Little Ituri Forest, we also see Bongos (one is pictured at the beginning of this article). Bongo are large forest antelope who live throughout Central and Eastern Africa. The Disney Conservation Fund is active in their protection. By 2003, the fate of the Bongo as a species was bleak, having not been seen around a primary habitat in Mount Kenya since 1994. Three hundred and fifty lived in captivity in the United States and 20 in captivity in Kenya. With the hopes of reintroducing a wild population into the Mount Kenya Game Reserve, a group of about 20 animals were sent from the United States via a 30-hour flight! Sent in 2004, three of these were from Animal Kingdom and aged between four and five years old. Kept in enclosures and in a reserve, the goal of this repatriation was to allow for breeding, and the eventual release of the group’s offspring into the wild. As of 2019, the Kenya Wildlife Service reported the repatriated population are continuing to live in semi-wild enclosures and their population is slowly increasing.

The Body Condition Scoring System, created at Animal Kingdom, is referenced in determining whether a specific Bongo is suitable for breeding and release into the wild. This repatriation effort is a fantastic example of how Animal Kingdom is not a zoo, or just a theme park. But instead, a conservation park engaged in global efforts to restore once dwindling wildlife populations.

Saddle-Billed Storks are also seen walking through the forest. Often four to five feet tall with a seven to eight-foot wingspan, these beautiful birds have black and white feathers with a red, black, and yellow beak. Their wingspan can conceivably cover the width of your Safari vehicle. The birds live in Africa south of the Sahara near rivers, lakes, and swamps. The Saddle-Billed Stork is not considered a threatened species at this time. Their name comes from the yellow saddle-shaped shield on its beak. Storks have lived in the park since its 1998 opening, and the first chick was born there in 2013.

The Greater Kudu is one of the largest antelopes in Africa, found in the eastern and southern parts of the continent. When threatened, they will freeze and blend in almost perfectly to their environment. With large ears they can easily hear potential predators and jump six feet or higher if needed in order to escape. Greater Kudu can also be seen at Animal Kingdom Lodge, especially on Jambo House’s Uzima Savanna.

Black Rhinoceros reside near a large watering hole. Black rhinos are distinguished from their white rhino counterparts by a hooked upper lip.  By 1995, their population in the wild decreased by 98% to fewer than 2,500; and are currently considered critically endangered. While their population has increased to 5,600, they continue to be plagued by poachers seeking their horns.

Rhinoceros are a flagship species. Flagship species are species selected to serve as an icon or symbol for a specific habitat or environmental issue. Focusing on the conservation of the Rhinoceros, for example, helps to create large and safe ecosystems for other species to also thrive. Large mammals with widespread appeal, such as the polar bear or tiger are often chosen, serving as ambassadors for the natural world.

The next leg of our journey will be along the shores of the Safi River!

Do you have a favorite animal on Kilimanjaro Safaris? What is your favorite section of the attraction? Please feel free to leave a comment!