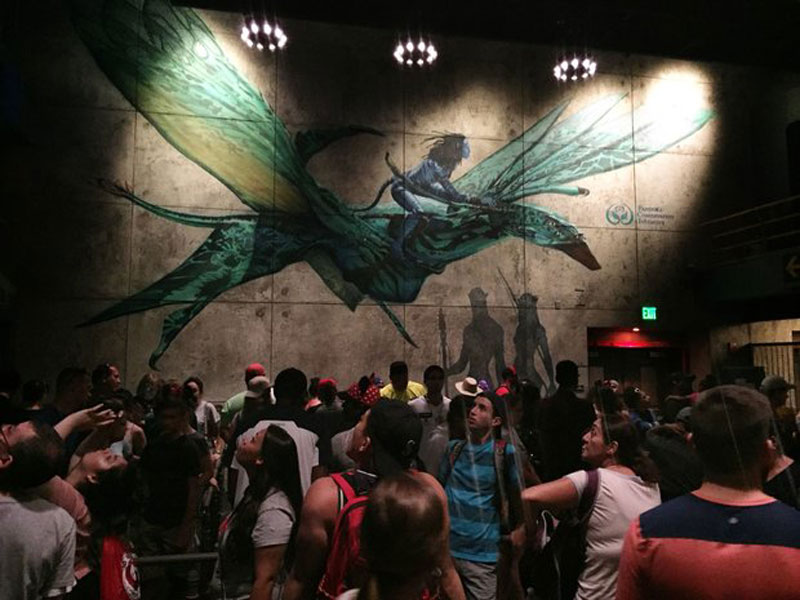 Wait times have only recently begun to lessen in the past few months for Disney’s Animal Kingdom’s newest attractions.

On the day this article was written, Avatar Flight of Passage reached 90 minutes and Na’vi River Journey rose to 70 minutes. In comparison, Slinky Dog Dash is at 60 minutes and Alien Swirling Saucers is 25 minutes. These times were taken from the My Disney Experience app at 10:30 a.m. on August 30.

Opening day of Toy Story Land is barely in our rear-views, but attraction wait times have been strangely low for the new area in Disney’s Hollywood Studios. But I have a solution for people who hoped Toy Story Land’s opening would make their Pandora – The World of AVATAR experience a little less time-consuming.

My tip doesn’t include waking up at the crack of dawn or quickly walking-almost-running to the queues, but rather taking a leisurely stroll through Animal Kingdom at the best time of day. As a self-proclaimed night owl, rope dropping isn’t my idea of a good time. Nighttime is arguably the best time to be in the parks, since most people go back to their hotels, the sun isn’t beating down on you anymore, and there aren’t as many screaming children. This, my friends, is the time to get in line for either Pandora attraction.

Every time I’ve ridden Flight of Passage and Na’vi River Journey I have waited less than an hour. If you want to hit both attractions in one night, I suggest waiting until about an hour before the park closes. Rope dropping loses its effectiveness when everyone is rope dropping the same ride. For instance, if Animal Kingdom closes at 10 p.m., get in line for Na’vi River Journey at 9 p.m. A bit of pixie dust and crossing your fingers later, and you should be good to get in line for Flight of Passage right after.

I usually avoid trying both rides in one night, just because you never know if River Journey will get stuck toward the end of the ride (which it has done every time I’ve ridden it) or other uncontrollable factors. If you only want to ride one of the rides, Flight of Passage is the best bang for your buck. In that case, get in line five or so minutes before the park closes. Flight of Passage always has a longer wait than Na’vi River Journey, but if you use this trick the wait is usually cut in half, if not less. The longest I’ve waited to get on the ride is 40 minutes using this trick. And not to worry, the Animal Kingdom powers-that-be know that there are people still waiting to get on the ride after the park closes, and buses and trams will still be running once you’re finished riding, even if you’re the last person in line.

Save yourself the precious time you have in the parks by not waiting in outrageous lines and enjoy Toy Story Land rides twice in the time it would take you to wait for Flight of Passage in the middle of the day.