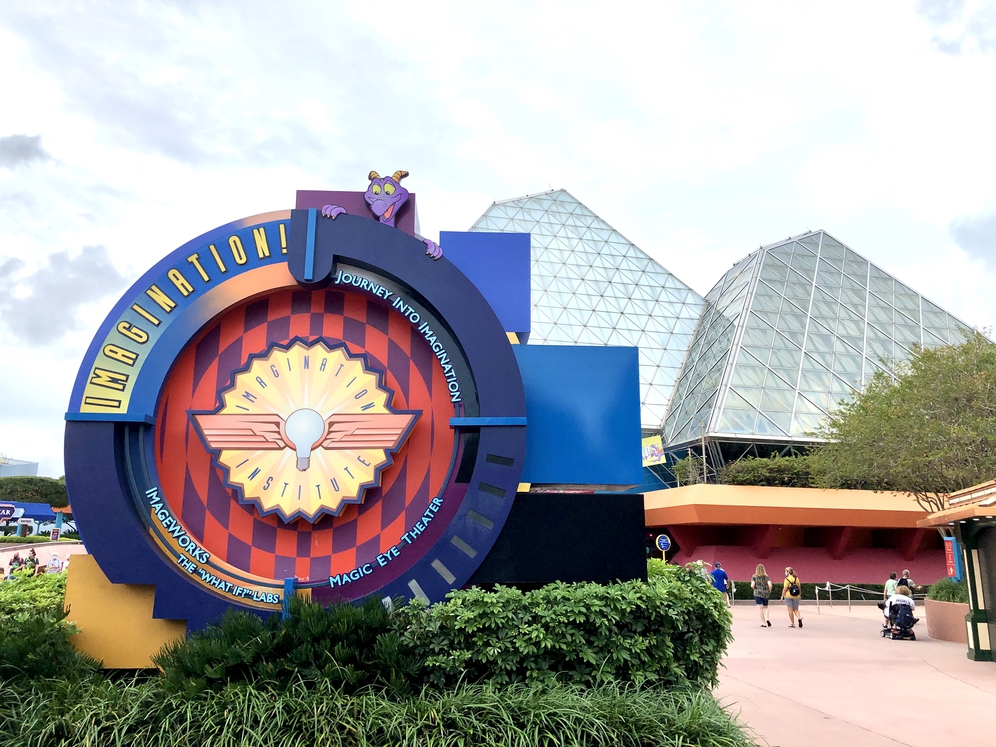 It’s hard to say goodbye to Walt Disney World attractions, isn’t it? I have fond memories of riding 20,000 Leagues Under the Sea with my dad. I miss Mr. Toad, and while it was lovely visiting him in Disneyland, I know it’s not the same. And I wish the Skyway buckets were still transporting guests from Fantasyland to Tomorrowland and back again, which is one of the reasons I’m so enamored with the Disney Skyliner. And don’t get me started on EPCOT‘s World of Motion and Horizons. Sniffle…it’s just so easy to become attached, isn’t it?

Before I met up with Ryno last week to do a livestream from EPCOT, I found myself in front of the Imagination pavilion. As I gazed up at the massive structure, I wondered, for really the first time, what could be done with it and its purple resident. I’ve never wanted to reimagine Journey into Imagination with Figment before, despite the public rumblings of it being necessary to do so. But, at this point, I found myself thinking that it might be an attraction I’d be okay letting go of if it meant that something with a fresher look, feel, and approach took its place.

It’s fun to throw an idea out here and there, but what if we fully did a little armchair imagineering and reimagined the entire building: the Magic Eye Theater next door (currently housing the Disney and Pixar Short Film Festival), Imageworks “What if” Labs and character meet and greet area, the attraction, the second floor of Imageworks (currently a Disney Vacation Club member lounge), and the Imageworks gift shop. I mean, if we’re going to dare to dream, let’s address the whole kit and caboodle, right? And, we must of course, find Figment a home and a gig. He was, after all, created for the original sponsor of the pavilion, Kodak. He’s become the mascot of the park, and we can’t very well just kick him out.

Since it’s always good to save a dollar or two, let’s say that the new attraction needs to utilize the same track currently being used, à la Magic Kingdom’s If You Had Wings and Delta Dreamflight. If Buzz Lightyear could move in and make an attraction out of what was once an airline and travel-themed ride, surely something could move into the Imagination pavilion and make use of what’s there.

I know that we’ve all heard the idea for re-theming the pavilion to Inside Out; a thought and rumor that rings a little louder now that Joy herself is flitting about in the grassy knoll across from the pavilion. But, in your opinion, is Inside Out the best way to go? The ample space inside Imageworks would be ideal for meeting and greeting Joy and her emotional friends, either in a physically distant way or otherwise. And, of course, with all of the brilliant colors used in the film, we’d have to dig around in a back room upstairs to unearth the Rainbow Tunnel that used to amaze kids of all ages. But how does Figment fit into an Inside Out-themed attraction? As a side note, if you’d like to read additional thoughts regarding what an Inside Out re-theme of the pavilion could look like, be sure to read DIS Contributor Spencer Wright’s July 2018 article. It’s chock-full of great thoughts, and, yes, I’d totally be down for a Bing Bong’s Candy Shop à la Pixar Pier. Yes, please.

It’s also fun to think back to the original version of the attraction and wish for Dreamfinder’s triumphant return to the ride. To have another walk-around Dreamfinder and Figment would be every OG EPCOT fan’s wish. To turn back the clock and bring back what we once had would be exciting, but, would guests connect again with the lovable pair? The attraction being renovated in the first place meant that it wasn’t what guests wanted anymore, right?

And then I come to another thought: what if the pavilion became an homage to Imagineering itself? If the thought behind the space is to give guests an understanding of the importance of using one’s imagination, why not take the time to dig into the dreamers behind the magic? From Walt and Roy to the Nine Old Men to the past and present amazing residents of 1401 Flower Street in Glendale. Each “lab” in the attraction could be a part of the imagineering process that guests could travel though: from initial thought to research and development and all the way to fully realized attraction, and, along their journey through the attraction, they could learn how using their imaginations can unlock a million possibilities. While the EPCOT Experience details the Imagineers’ future plans for the park, the Imagination pavilion could be both archival (wouldn’t it be amazing if show pieces or elements from the Walt Disney Archives rotated in and out?) and inspirational.

For that matter, the pavilion could simply focus on the imagination of one man: Walt Disney. While One Man’s Dream in Disney’s Hollywood Studios showcases highlights from Walt’s life and career, the Imagination pavilion could focus on the creative process of one of his projects or films from start to finish. Guests could then head to the Magic Eye Theater and watch snippets of the finished project. The overall theme would be the power and potential of one’s imagination as seen through the example of Walt Disney himself. After all, we’re getting a statue of Walt in the new Dreamer’s Point area in the middle of the park. It could help tie things together, as well as inspire new generations of guests.

But then where does Figment go? Hmmm…