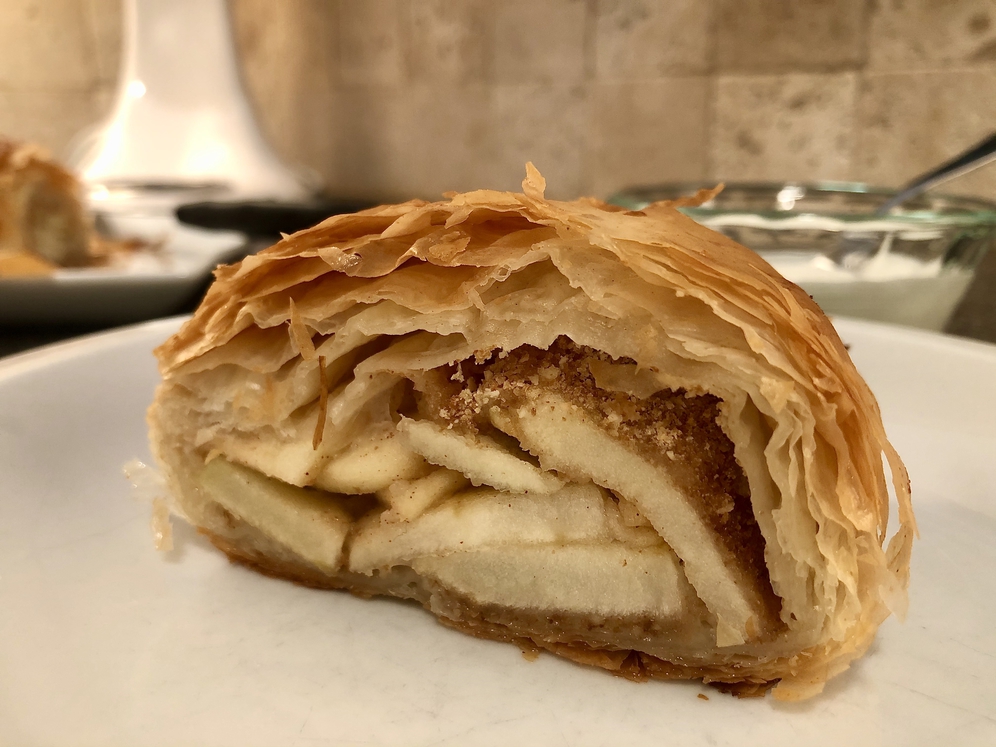 Sometimes, when it comes to researching the recipes for Saturday Snacks, I need to do a little sleuthing. I like to only use recipes that come directly from Disney, and I like to try to keep the ingredients list low-ish in number and keep the steps required to make the snack relatively doable (it’s Saturday, after all; we don’t need a crazy to-do list when it comes to our snacks).

This weekend’s snack, EPCOT’s Apple Strudel, requested by my hubby, required a bit of extra detective work, however. In the past, Disney has released two different recipes for this delicious dessert, but used the same photo for both recipes. One recipe calls for us to make our own dough, while the other asks us to use sheets of phyllo, and the picture in question is clearly made with phyllo. One recipe includes steps to make the vanilla sauce that comes with Biergarten‘s current version of the strudel (pictured above), and one doesn’t. And the one that does include the vanilla sauce recipe forgets one key ingredient (the vanilla), as well as how much and when and how to add it to create the sauce. Sigh.

So, today we’ll be turning back to the ever-faithful EPCOT International Food & Wine Festival: Recipes & Stories Celebrating 20 Years, and we’ll be constructing the apple strudel (along with optional whipped cream) pretty much as they ask us to. According to the cookbook, this strudel was first created for the Food and Wine Festival by Chef Christine Weissman. It debuted at the Germany Marketplace booth, and, from what I can tell, eventually made its way to Biergarten. Which, by the way, is offering a great all-you-care-to-eat meal experience during these times of COVID. You can read about my recent meal at Biergarten here.

I know this recipe – or just the sheer idea of a strudel – sounds complicated. Trust me, it isn’t. I promise. I have never made an apple pie or strudel or turnover or anything of the sort, and I was still standing at the end of this. It seems harder than it is. We’ve got this.

My grocery store trip for this recipe included picking up three Granny Smith apples. No offense to Granny or her apples, but we just don’t normally have them on hand. The phyllo dough was the wild card among the group of ingredients. I’d never worked with phyllo dough before, much less purchase it at the store, so I did a little reconnaissance in the Publix frozen foods aisle two weeks in advance.

The box of phyllo that my grocery store sells contains 2 wrapped rolls of 20 sheets each. That’s twice the amount needed for this recipe. The night before you make the strudel, take one roll out of the freezer and place it in your fridge to gently thaw. That way, it’ll be ready to go when you are.

Begin by preheating your oven to 450 degrees. Grab a large bowl (even though the recipe said medium, I went with a large one, and I was happy that I did), and wash your apples.

Grab a vegetable peeler and peel the apples. Or, if you have a fancy apple peeler that attaches to your kitchen counter or table, give your apples a whirl on that.

Once the apples are peeled, slice them thinly. I also sliced the larger pieces in half because I felt like that was what I’ve seen when I’ve enjoyed strudel in the past.

Mix everything together and set the bowl aside. By the way, I just love it when a recipe tells you to set something aside. It’s like a little way to go that you’ve successfully completed a step. Like “Good job, bud. You’re done messing with that for now.”

Stir them, and, before you know it, it’ll smell like warm bread in your kitchen and those little bread crumbs will be golden brown. Take them off of the heat, pour them into a bowl to cool, and, you guessed it, set them aside.

Here’s where we get to channel our inner preschooler. Spread a kitchen towel out on your counter. You’ll be using a lot of butter for this portion of the recipe, so maybe don’t use the kitchen/tea towel passed down to you from your great grandmother if that’ll cause you a little heartburn.

Take the phyllo dough out of its wrapper, and gently unroll it. The sheets of phyllo dough are very thin…like thinner than paper thin. Treat them very gingerly. That being said, if a sheet of phyllo tears at any point (and it will, I can guarantee); do not freak out. The melted butter will come to your rescue.

Speaking of melted butter, this is the perfect time to toss your 3/4 cup of butter into a measuring cup or bowl and melt it in the microwave.

Gently place your first sheet of phyllo dough on the kitchen towel. Again, if it rips, tell yourself it’ll be alright. Next, take a brush and very, very gently brush the entire sheet of dough with melted butter.

Gently lay your next sheet of phyllo dough on top of the first, and brush the whole enchilada with that lovely melted butter.

And just keep going. You and I learned how to paint in preschool; we get to use those skills while making our strudel.

While you’re working with a sheet of phyllo, it’s a good idea to keep a damp kitchen towel on top of the dough that’s waiting to be used. If the phyllo dries out, it’ll turn into phyllo confetti, and while confetti’s a fun thing to have around, it’s not good to make a strudel out of. Keep stacking and painting until all 20 sheets are done.

And here we are: the folding the whole thing over part. It’s the portion of the recipe of which I’d been most afraid. The recipe calls for us to use the kitchen towel to fold the strudel and then transfer the whole thing to a baking sheet. Ummm, no. If I actually managed to get this thing folded like I’m supposed to, transferring it seam side down from the towel to a pan just seemed like I was asking for trouble.

I chose to back up and punt: I grabbed a baking sheet from my cabinet and lined it with parchment paper. I knew that the melted butter had likely acted as an adhesive of sorts and that moving the stack of 20 phyllo sheets would be easier than moving the whole apple-filled thing after folding it. Sure enough, I picked up that stack and placed it on my pan without a problem. Whew.

Our next step is to sprinkle the toasted bread crumbs along the top of the long side of the buttered phyllo.

Spread your apple mixture on top of the bread crumbs, again, along the top of the long side.

This is when I realized that my medium Granny Smith apples were indeed on the larger side of medium, so I removed a handful or so. I just had a feeling that I had too many apples going on, and I started to fear that I’d never be able to fold the strudel over properly.

Now we roll the strudel. Use the parchment paper if you need to in order to get it all moving in the right direction.

Gently support the phyllo and fold it over, seam side down.

Don’t worry if the dough tears or breaks; we’ll coat it in melted butter before it goes in the oven, and those rips won’t matter at all.

Whew. Folded. Give yourself or a loved one a high five at this point. You’ve got this. Take a minute to tuck any rogue apples back into the ends of the strudel.

Gently brush the strudel with the remaining melted butter, and place the strudel in the oven for 25-30 minutes.

While the strudel bakes, pour a cup of heavy whipping cream into a bowl and whip it slightly. You can either serve the slightly whipped cream on the side of your strudel or on top. And, if you’d like sweeter whipped cream, you can toss a little sugar in it. And a little vanilla extract, too, if you’d like.

I checked my strudel after 20 minutes, and it was done. And it smelled so good in my kitchen while it baked, by the way. Hello, fall season in my oven.

This was the time for a happy dance. I was so excited that it looked like it was supposed to. Let your strudel rest 30 to 45 minutes. Or let it rest for 25 minutes, because you’re just hoping it tastes as good as it looks and you simply can’t wait. Ahem.

Friends, it was good. I was so proud of myself for pulling this off. The whole slicing of apples thing always intimidated me, and I’ve just thought over the years that something like this would be too difficult. But, it wasn’t.

The apples were cooked just right, and the whole thing – raisins, cinnamon, and all – tasted like fall.

The next time I make it, I want to try to infuse it with a bit more moisture. Maybe simply covering the apple mixture with plastic wrap (and using smaller apples) while the mixture is set aside would help.

But, the taste was right on. The phyllo dough was gloriously flakey, and golden brown and buttery. It was spot on.

Grab that slightly whipped cream and dollop it wherever you’d like. My very happy hubby also made the observation that a scoop of vanilla ice cream would be perfect as well. You do you.

Dear Chef Weissman, we thank you for your recipe. And for blessing us with a taste of the Germany pavilion in our very own kitchens.

Have you ever made a strudel? What are you baking these days? Whatever you’re up to this weekend, make it a wonderful one!

Ready to try Chef Weissman’s recipe? You’ve got this.