Tomorrowland was originally designed to portray Disney's view of the future. The only trouble with futuristic views is that they need frequent updating.

In the 90's, Disney chose a different tactic and renovated Tomorrowland to depict the future as described by sci-fi writers from the 1920's and 1930's. With this imaginative decor, Tomorrowland is the "Future That Never Was."

Lots of neon, glass and gleaming metal is used to create this themed land. Over by Space Mountain, there are metal palm trees that actually react to sunlight. 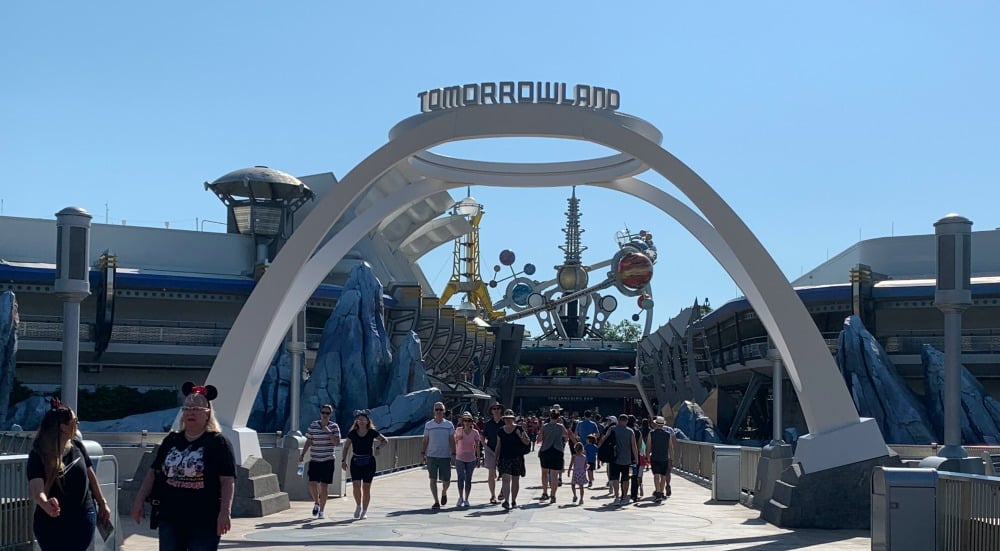 Over time, some attractions were renamed to give them a futuristic feel. The "WEDway People Mover" which began operating in 1975 is now the Tomorrowland Transit Authority PeopleMover. The Grand Prix Raceway from '71 is the Tomorrowland Speedway. Other than their names, neither of these attractions have changed much since they opened.

Another minimally changed attraction is Astro Orbiter which replaced 1974's Star Jets. At least with Orbiter, if you're not bothered by heights, you get an amazing view of the park. 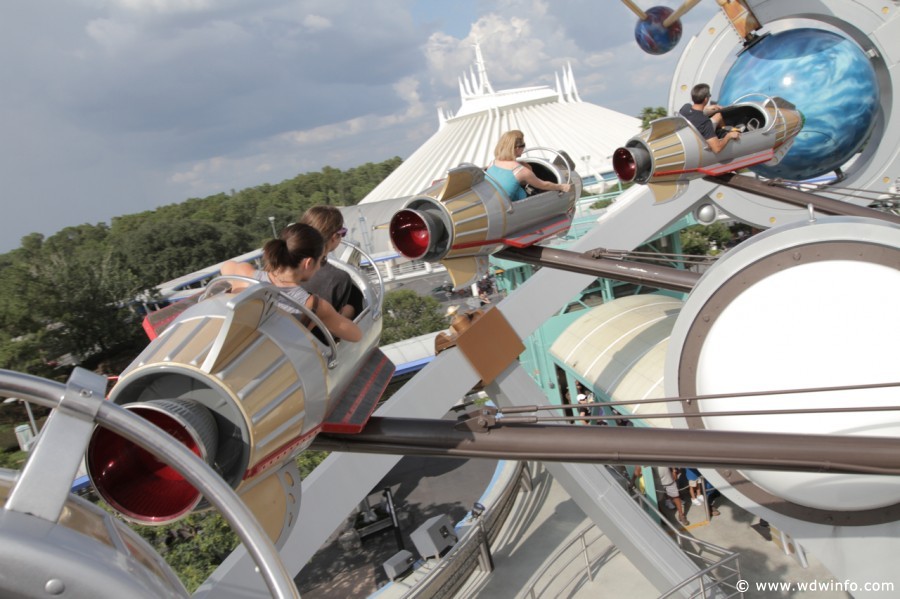 Two of Disney's most popular attractions are found in Tomorrowland. Thanks to its incredible theming, Space Mountain is not to be missed. Since 1975, this ride through space always has a long wait and remains a park favorite.

The other "must do" is Buzz Lightyear's Space Ranger Spin. This ride puts you in the middle of a gigantic arcade game and is fun for guests of all ages.

The TRON Lightcycle Power Run Rollercoaster, the highest rated attraction at Shanghai Disneyland, is coming to Tomorrowland in a brand new area near Space Mountain. The new attraction is set to open in time for Walt Disney World's 50th Anniversary celebration in 2021!

Right behind the Buzz attraction is the Monsters, Inc. Laugh Floor. Same as Buzz, this is great for all ages. It can accommodate a lot of guests which minimizes wait time and you can't beat taking a break from the heat by sitting and laughing.

Finally, in a bit of a paradox, one of Disney's oldest attractions is found in Tomorrowland. Disney's Carousel of Progress featured in the 1964 New York World's Fair is located here.

Tomorrowland has several snack and counter service venues. Cosmic Ray's has tons of indoor seating, entertainment and a menu that offer more choices than most of the other counter service destinations. The Lunching Pad offers turkey legs, snacks and frozen drinks.  If you're looking for a cool treat, Auntie Gravity's Galactic Goodies offers a selection of ice cream and floats.

Shoppers won't be disappointed. The best store in Tomorrowland is Mickey's Star Traders and offers a variety of souvenirs. If you can't find what you're looking for there, you can also check out Merchant of Venus.

Whether it's your first or fiftieth visit, you definitely want to go "back to the future" and explore Tomorrowland.