Buzz Lightyear's Space Ranger Spin is one of the most fun attractions in Disney World. You're literally in the middle of a giant arcade game, shooting lasers and racking up points as you head to the ultimate showdown with the evil emperor Zurg.

You ride in XP-37 Space Cruisers. These are designed to seat two. One mistake we sometimes see is when Mom or Dad squeezes in with two of the kids. While you may all fit, someone isn't going to have a laser cannon to shoot. If the kids are big enough, let them ride on their own and take the car behind them. 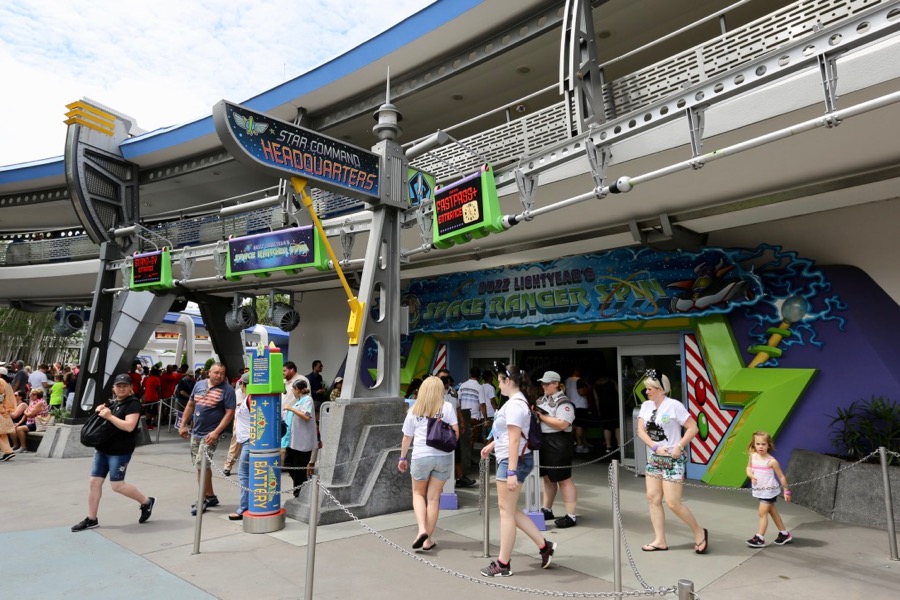 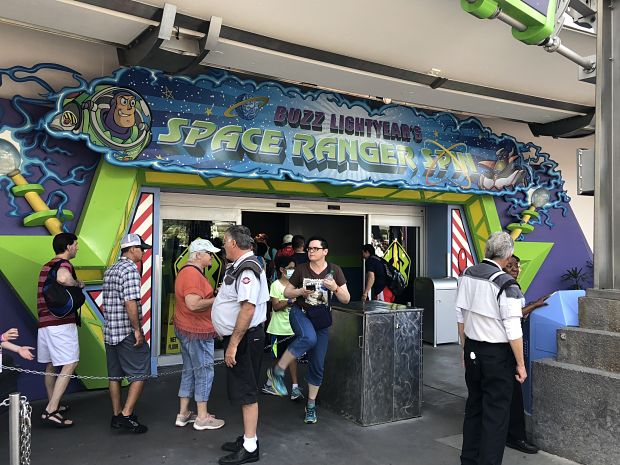 The Space Cruisers glide along an "Omnimover" and rotate a full 360°. There are thirteen scenes to pass through:

The car's ability to swivel and spin is controlled by the riders. There is normally a long line for this ride, but the cars are relatively quick loading.

By the way, that flash of light towards the end isn't a huge score- you just had your picture taken. Souvenir photos will be available for purchase at the end of the ride. 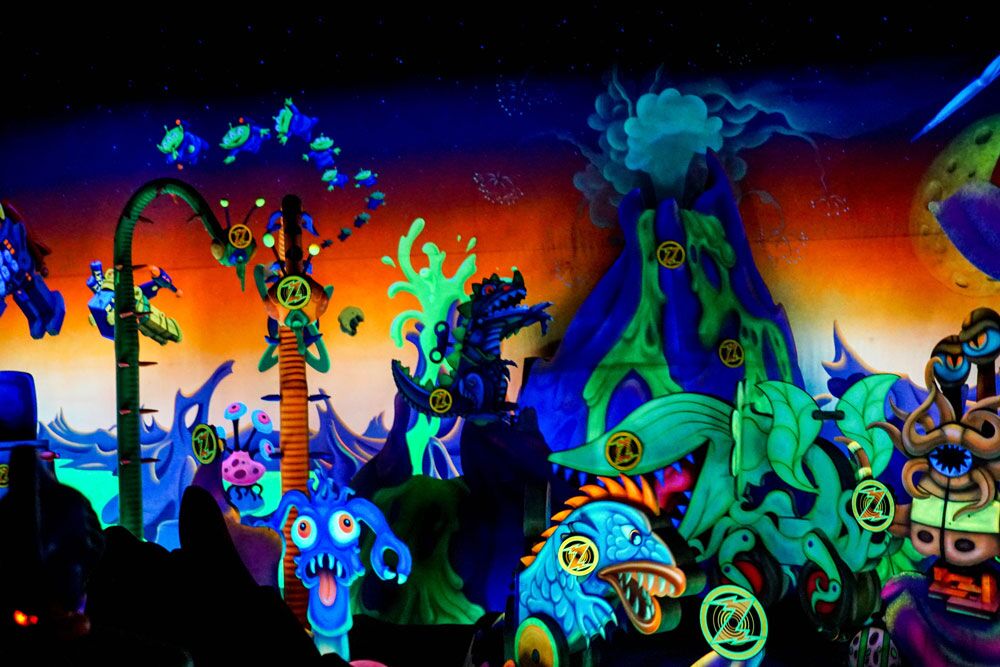 NOTE: In case you're worried about the lasers and 'taking an eye out', relax. They've actually been certified by the Food & Drug Administration and are safe. (Think barcode scanners at the grocery story for comparison.) BLAST AWAY!! No one's going to get hurt, except for the occasional bruised ego if you're beaten by your 4 year old.

Disney history buffs will want to note that this site originally housed the "If You Had Wings" attraction which was sponsored by Eastern Airlines and was in operation from 6/5/72 through 6/1/87.

Handicapped Accessibility: Guests will have to transfer out of their wheelchairs for this ride.

Scoring Tips:
Aim for the center of the "Z's".
The targets that are further away and those that are moving are worth more points.
Hit the top of the volcano for 100,000 points.
After passing the "Rock 'Em, Sock 'Em Robots," pivot your car around and see if you can hit the target on the back of the robot's wrist for 100,000 points.
Look for the spider after the robots and see if you can shoot it.
In the room where the targets are projected, don't stop shooting.
Try hitting the batteries in the front to knock them down and rack up points.
Read the Ultimate guide to Buzz Lightyear’s Space Ranger Spin 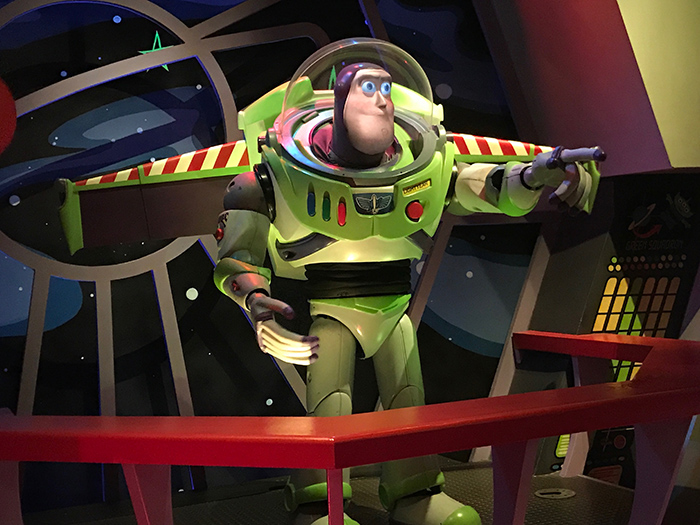 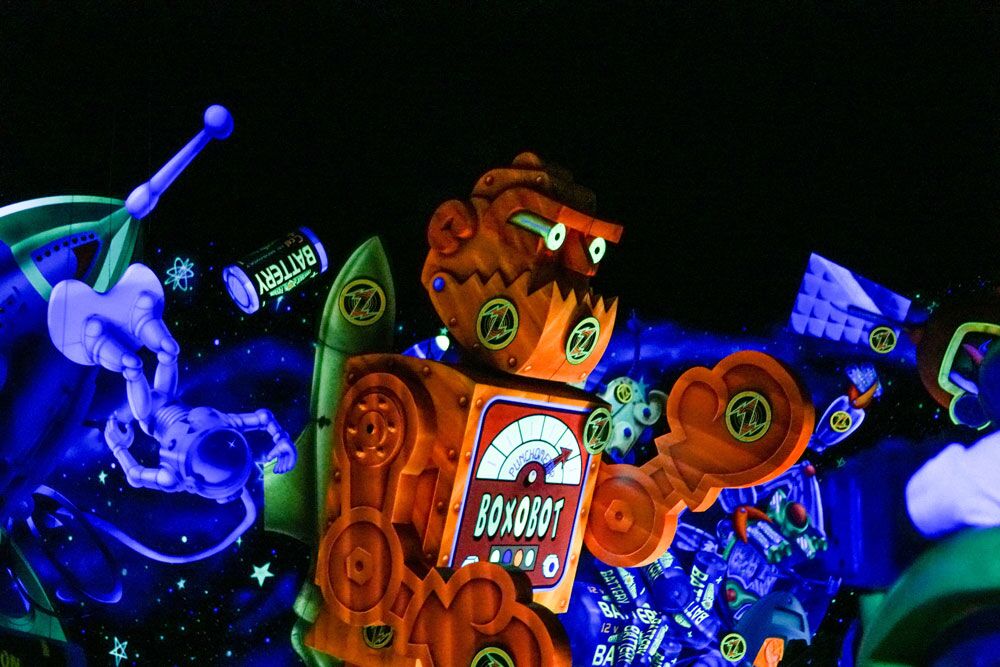