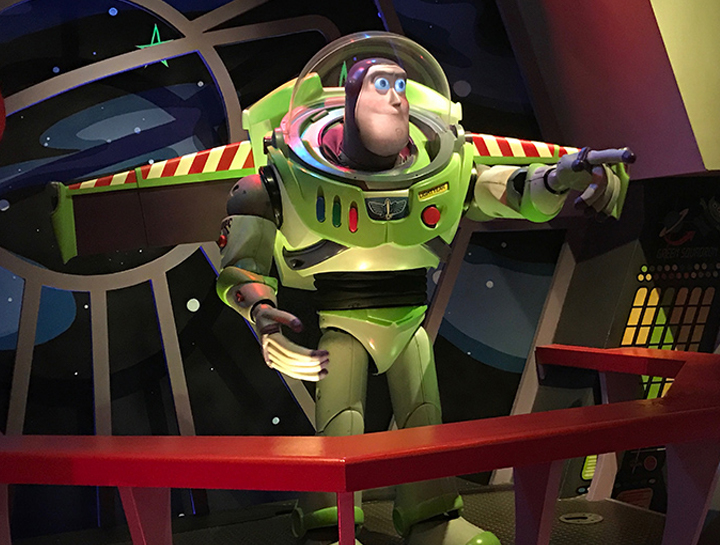 Buzz Lightyear’s Space Ranger Spin officially opened in the Magic Kingdom‘s Tomorrowland on November 3, 1998. This was only 3 years after the Pixar film Toy Story premiered in theaters. One of the film’s beloved characters was Buzz Lightyear, and it was easy to see why Imagineers quickly saw him as a perfect fit for Tomorrowland. Guests enter Star Command where they learn Buzz is calling on new candidates to blast Zurg and his minions aboard an XP-37 Space Cruiser. Your objective is to try and hit as many targets as possible using a laser gun attached to your cruiser. With a perfect score, you’ll earn the title of Galactic Hero! If you are competitive in nature this game very entertaining. Trying to outscore your family members is a ton of fun, and the best part is you might be surprised who ends up with the highest score — it isn’t always mom and dad! I love that Disney created a family-themed experience in which everyone can participate, have fun, and even compete with each other. It doesn’t matter if you’re 6 years old or 60 years old. Your XP-37 Space Cruiser does spin, and you can control this spinning with a joystick. If you get nauseous easily then be careful of who you choose to control the joystick, because this ride can feel a lot less like an interactive game and more like the Mad Tea Party – the spinning teacup attraction in Fantasyland.

This attraction is also very re-rideable. By that I mean every time you ride Buzz Lightyear’s Space Ranger Spin you have a different experience. Whether you are trying to get a better score than your previous time, maintain a streak of perfect scores, or you’re just along for the ride there are a bunch of different ways to enjoy the experience. For a couple of years, I was thinking a refurbishment of this attraction would simply require a paint job and a couple touch-ups, but at this point – while Disney should maintain the ride’s basic concept – it needs to be completely gutted and a redone, bringing back the fun elements many guests love, but with needed upgrades to bring Space Ranger Spin up to the current standards guests expect from a Disney attraction. This ride is amazingly already twenty-years-old, and it really shows. Tomorrowland attractions should showcase the most impressive theme park technology, and I think at one point that’s what this ride did, but now twenty years later it needs to be brought back to life.

Buzz Lightyear Space Ranger Spin also needs better music. The queue plays this drum beat repeatedly and it becomes maddening if you are in there for more than 5 minutes. The ride itself features the sounds effects including the sound of your laser guns blasting, along with audio I can only describe as rhythmic galactic noises. (If you can think of something better to call this I’m genuinely interested in what anyone else would call it.) Overall: This attraction is a whole lot of fun. The ride’s interactive-ness was really the first of its kind at Disney parks, and since then several rides now include interactive elements such as Toy Story Mania, and the counterpart Buzz Lightyear-themed experiences around the world. Unfortunately, Buzz Lightyear’s Space Ranger Spin needs a full refurbishment. This is an enjoyable interactive adventure that is sadly starting to feel like a grungy old arcade. I’d give this attraction a 7/10.