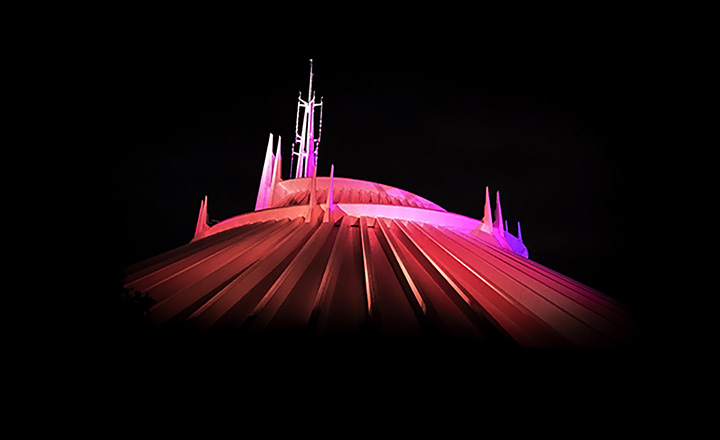 Even if you’ve never been to a Disney park in your life, you have most likely still heard of Space Mountain. The iconic Tomorrowland attraction opened in the Magic Kingdom in 1975, and since then it has been one of the most popular theme park attractions in the world. There is no denying the popularity of Space Mountain. It has been over 40 years since the attraction first opened, and it still garners lines of 60 minutes or more. If you don’t want to wait for that line, fortunately, you can get a FastPass, which allows you to enter the expedited line. Without a FastPass, be prepared to wait in a fairly long line. Space Mountain’s queue is themed as the spaceport’s mission control center. The while waiting in line guests can play an interactive computer game or look out space windows that feature planets and spaceships zooming by, both of which help the time pass by a little faster. After the interactive game the second part of the queue is my least favorite part of the entire Space Mountain experience, essentially it becomes a large corral in which you zig and zag back and forth for about two-thirds of your wait. During this section of the queue there really isn’t anything to do, or even look at, and you are packed in with hundreds of other people, so it gets very loud. Near the end of the line, it is divided into two boarding areas, for each of the two tracks. Yes, Space Mountain features two almost identical tracks: the Alpha track and the Omega track. Once you board one of the two tracks, are seated, and your safety bar is pulled down, then you’re finally ready for your “journey through the cosmos!” The ride is almost completely dark, with only the “stars” illuminating the track; because of this, you can’t see when the turns and drops are approaching. These surprise turns and drops feel a lot faster when you can’t see where you are going. Speaking of how fast you are going, even though it may feel faster, Space Mountain only tops out at 28.7 mph! Space Mountain is thrilling, but it isn’t so intense that you can’t enjoy the entire experience. There are no loops or corkscrews, so it plays to this perfect balance where it is intense enough to be exhilarating, but not so intense that it becomes terrifying. That is what makes this attraction great for everyone in the family that is tall enough to ride (44 inches) — the adults aren’t bored with a “kiddie coaster” and the thrills aren’t too scary for the kids. While you’re zooming past the stars you’ll most likely have a giant smile on your face.

I can still remember my first experience on Space Mountain. I was blown away. It was nothing like anything I had ever been on before, and even though the ride only last 2 minutes and 30 seconds, it was still one of the longest lasting memories I have from that trip 19 years ago. As great as this attraction is, it does have its faults. It is very jerky, to the point where guests with neck and back issues should skip riding this attraction. All roller coasters have a certain level of jerkiness, so I want to be clear that Space Mountain is an outlier. Another thing I don’t particularly love about Space Mountain is the location of the ride photo. I know this is a strange thing to pick on, but Space Mountain is an iconic attraction and this should be a home run ride photo; unfortunately, the photo is taken before the thrilling part of the attraction has really begun, so in most pictures guests are just sitting there with no expressions on their face. As you zip and zoom around you’ll hear Starry-O-Phonic Sound music that complements the interstellar journey you truly feel like you are on! The only problem with the Starry-O-Phonic Sound music is that instead of the speakers being featured in your ride vehicles, they are unfortunately just blasted from speakers throughout the attraction — this doesn’t allow the music to then sync up with the ride.

Overall: You’d have to be dead inside to not get off this attraction without a smile on your face. Yes, it has its faults, but they are easy to overlook because of how fun this ride is. I’d give it a 9/10 rating. It is certainly a must-do for anyone that doesn’t have neck or back problems.