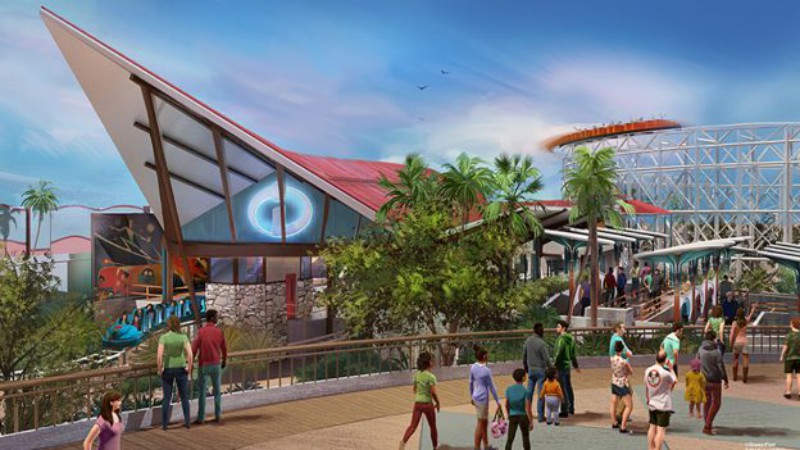 The transformation from Paradise Pier to Pixar Pier is nearly complete at Disney California Adventure, and today we learned a bit more about each of the neighborhoods that make up the updated land, including the names!

Pixar Pier is set to officially open on June 23rd.

Anchored by the Incredicoaster, Incredibles Park will be “an inviting plaza featuring mid-century modern design aesthetics.”

As guests enter the area, the archway above will feature the Incredibles logo.

As we already know, the Incredicoaster will take guests on exciting ride with the Parr family as they look for Jack-Jack.

Speaking of the littlest super, Jack-Jack Cookie Num Nums is a new food location in the area that will feature fresh baked goods.

The fan favorite Toy Story Midway Mania! is front and center in this neighborhood, with Jessie’s Critter Carousel coming in 2019.

Guests will also have the opportunity to take a photo with “fun-sized Zurg.”

At the heart of Pixar Pier, Pixar Promenade honors California boardwalks of the past and includes many of your other Pixar favorites.

Pixar Pal-A-Round still features the face of Mickey Mouse on the side that faces Paradise Bay, but each of the gondolas are now adorned with a pair of Pixar pals.

The Games of the Boardwalk have been updated as well, with Bullseye Stallion Stampede being joined by Heimlich’s Candy Corn Toss, Wall-E Space Race, and La Luna Star Catcher.

The area will also include a classic band-shell stage, which can be used for entertainment or character encounters.

Finally, Angry Dogs will offer up food in the area.

The west end of Pixar Pier will include a “lush and colorful area” that will be a “playground for the emotions.”

A family-friendly attraction themed to Inside Out will open later.

For a closer look at Pixar Pier, check out our video featuring Walt Disney Imagineers touring the Blue Sky Cellar and discussing the new land: