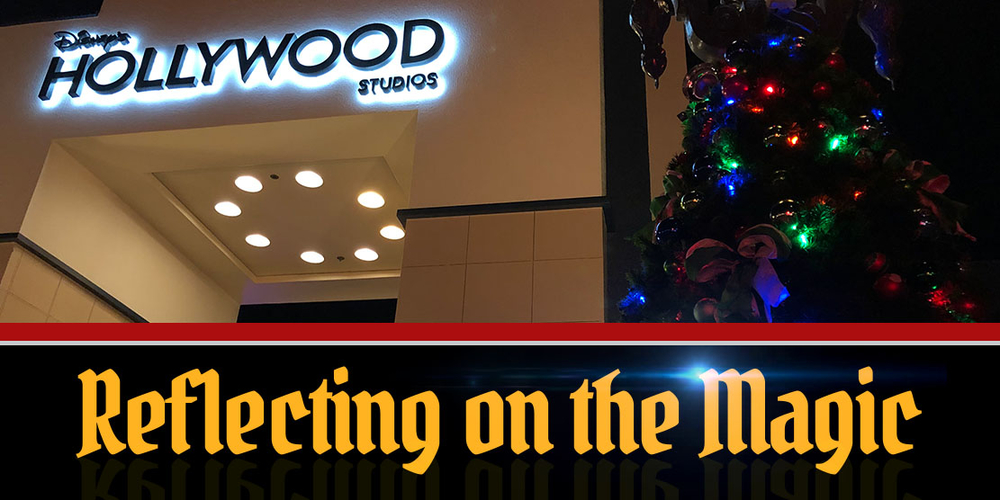 Call me sentimental, but I’m in the mood to reminisce today. It’s a gorgeous, sunny, cool day here in Central Florida, and the parks being closed has me reflecting, and I thought that maybe you’d want to join me as we turn the clock back just a few months. Or maybe we’re fast forwarding several months as I know there are some of you who are beginning to plan a Walt Disney World vacation for the upcoming 2020 holiday season. Nonetheless, let’s throw on our favorite scarf and make a cup of hot cocoa as we look back at some of the holiday decorations seen last year at Disney’s Hollywood Studios.

If you haven’t been to Hollywood Studios during the holidays in recent years, let me just say that it’s a sight to behold. I know, I know…the Osborne Family Spectacle of Dancing Lights is no longer with us, and, yes, I miss those lights, too. But the team behind the decorations in the park has done a marvelous job of adding to and defining the holiday aesthetic and guest experience over the last few years, and, to be honest, Hollywood Studios is easily now my favorite WDW park at Christmas. Hands down.

The decorations begin as you approach the park with garland in silver tinsel studded with ornaments in classic colors.

Garland is draped across the street along Hollywood Boulevard, and classic holiday music sets a festive mood.

Small Christmas trees are affixed to the light poles in the entrance area, up Hollywood Boulevard, and near the Chinese Theater.

As you turn off Hollywood Boulevard toward Echo Lake, you’ll begin seeing fixtures that mimic lighted vintage Christmas ornaments hanging from the lightpoles. The amber glow from these fixtures in the evening is magical.

The park holds a Christmas tree lighting each evening during the holiday season. Just before dusk, a recorded announcement plays to let guests know that the lighting will take place in just a few minutes. While the lighting itself doesn’t take long, it’s a neat moment, and one that I would recommend not to miss. The colorful ornaments floating on the lake also light up.

Even Gertie gets into the holiday swing of things with a Santa hat and a red ornament.

Baby deer are found in the hedges near the lake. The decorations in the Studios are decidedly vintage-inspired; the retro theme is something that is found in the decorations throughout the park during the holidays. Also note that the dark green table umbrellas behind the deer have been transformed into trees with a little tinsel.

Pink poodles round out the cast of holiday characters found near Echo Lake. Who knew that pink poodles were a holiday must-do?

Bless their hearts; I call these guys the creepy sugar babies. Sorry about that, lil fellas. All kidding aside, I cannot express enough how much I love that the team in charge of decorating the Studios for the season has embraced the vintage aesthetic. It helps define and differentiate the Studios from the decorations found at the other WDW parks.

These peppermint candy-bedecked maidens can be found on the path that leads from Hollywood Brown Derby to the intersection of Hollywood and Sunset.

Twinkle lights are woven into the ground cover, making the park sparkle at night.

My personal favorites of all of the holiday decorations in the park are the tinsel stars found along Sunset Boulevard. Much to my surprise and delight, the stars went up super early last year on October 17th.

The stars, coupled with the Flurry of Fun transformation of Tower of Terror and the intermittent snowfall along the street, make Sunset Boulevard the place to be after nightfall.

Just one last stop before our holiday tour wraps up. If you didn’t know, Santa is available for meet and greets in Once Upon a Time at the end of Sunset Boulevard during the Christmas season.

As you can see, Santa’s meet and greet location is simply gorgeous. Note that after December 24th, Santa Goofy takes Santa’s place. The big guy needs a post-Christmas break, after all.

Do you have a favorite section of Hollywood Studios during the holidays? Which park is your favorite for all things Christmas? Please let me know in the comments section below.