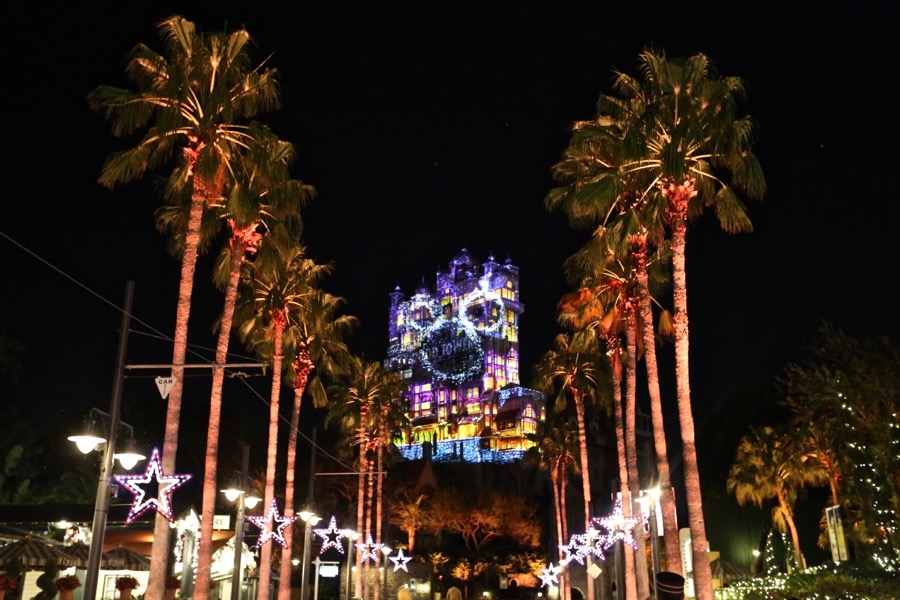 The holidays are officially here at Walt Disney World and this year, the place to be is Disney’s Hollywood Studios. Magic Kingdom has Mickey’s Very Merry Christmas Party and Epcot will have the Candlelight Processional and Festival of the Holidays, but Disney’s Hollywood Studios has needed some love and attention since the closure of The Osborne Family Spectacle of Dancing Lights in 2015. Let’s go over the reasons why you need to give Disney’s weakest park a chance this holiday season!

Sunset Seasons Greetings is the big new addition to Disney’s Hollywood Studios and it is the perfect addition. Many have complained about projecting happy holiday entertainment on the dark and brooding Tower of Terror, but when you see it in person, it is extraordinary. The 15-minute loop consists of four different stories from many beloved Disney characters, including Mickey’s Christmas Carol with a Victorian themed Tower of Terror, Toy Story with a Hollywood Toy Hotel, Swedish Chef and his Gingerbread Muppet themed Tower of Terror, and Olaf with an Arendelle themed Tower of Terror. My personal favorite in the loop is the Swedish Chef and the Muppets, but the Mickey’s Christmas Carol is extremely elegant and very classic. You can watch three of the moments below! Note – the Frozen segment includes material from Olaf’s Frozen Adventure and is blocked on YouTube.

Decorations are a touchy subject for many Disney fans. Yes, Main Street U.S.A. is beautifully decorated along with the front of Cinderella Castle, but the décor disappears as soon as you leave the Hub and venture out to the various realms. Epcot and Animal Kingdom are an afterthought when it comes to decorations for the most part, and some of the resorts go all out while others are essentially ignored. Disney’s Hollywood Studios has definitely received an upgrade this year. Most of the park is decorated – the major exception being the area around Star Tours, but the biggest change this year is Echo Lake. The Christmas tree that previously stood outside of the park has been moved inside and set up on a platform on the lake to provide a very memorable photo opportunity. Christmas ornaments are floating throughout the lake and Gertie the Dinosaur even got in on the action with a Santa Claus hat! Light poles around the lake are adorned with retro Santa, Reindeer, and candle lights that add so much to the atmosphere. Throw all of that together with classic holiday tunes and they have now created an area of the park I love even more than BaseLine Tap House. If you don’t have kids, there is a good chance you’ve never experienced For the First Time in Forever: A Frozen Sing-Along. However, Disney has changed up the show in time for the holidays and has changed the ending to include three songs from the short Olaf’s Frozen Adventure that will be playing in theaters in front of Coco. Olaf’s Frozen Adventure focuses on helping Anna and Elsa find their own holiday traditions, so the songs are absolutely perfect for the Christmas season. The only thing I would recommend is waiting to check out the show after the short has been released, so that way you hear the songs for the first time in the proper context, but it is a cute and welcomed addition.

Last year, I was the most excited person in the world for Jingle Bell, Jingle BAM! and then it happened. I’m actually a fan of Prep & Landing and pretty much ALL of the Disney moments represented in the show, but Jingle Bell, Jingle BAM! had barely any fireworks, which made it very lackluster. Well, Disney listened to feedback and took the nighttime fireworks spectacular to the next level and the difference is shocking if you compare this year’s version with last year’s. Not only is there more pyro, but they have added even more clips into the show. Essentially, Jingle Bell, Jingle BAM! is now worthy of its ridiculous name and I will be back many times to watch it.

Listen, I know that The Osborne Family Spectacle of Dancing Lights is one of the greatest things that Disney ever did for Christmas and I miss it just as much as everyone else does. Disney did not do enough to fill that gap last year by adding the original, lackluster Jingle Bell, Jingle BAM!, but they are making up for it now with more décor, Sunset Seasons Greetings, and the revamped Jingle Bell, Jingle BAM! nighttime fireworks show. Considering I can head to Disney’s Hollywood Studios and see all of this entertainment with my park admission, unlike Mickey’s Very Merry Christmas Party at the Magic Kingdom, I will be making Disney’s Hollywood Studios my go-to place this holiday season!