Dissension Amongst the Ranks: A Dining Review of Il Mulino 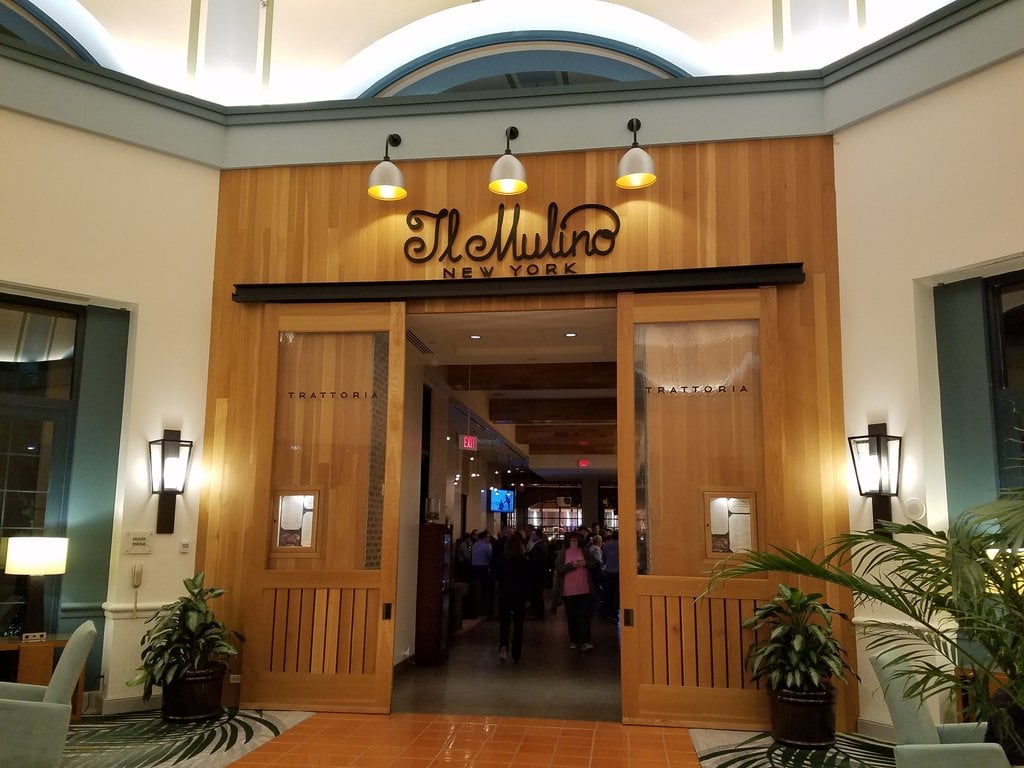 The Walt Disney Company brings magic and memories to the multitudes. From the world class theme parks sprinkled throughout the globe to the multiple classic and neo-classic films viewed by the millions, the company known as “the House of Mouse” creates excitement and enchantment for the spectators, visitors, and listeners of the seemingly endless product that this multi-billion dollar company provides.

Almost in a paradoxical fashion, this intriguing company also provides something very contrastive to the typical idea of a Disney product, the idea of dissension, even among family members. Some argue whether Disneyland or Walt Disney World (WDW) shines as the top resort in America, while others dispute over the best ride at either. Friendly debates arise as my own family discusses whether we prefer either the larger cruise ships in the Disney Cruise Line fleet or the more classic, smaller Disney Wonder and Disney Magic. At times, quarrels erupt in message boards and social media accounts as they discuss the classic Disney properties versus the new intellectual properties and which deserves more space in the theme parks. Healthy and friendly disharmony even appears in the family planning aspects of dining at Disney. Such is our story.

On a recent trip to WDW, our family set aside time to meet up with friends from our Adventures by Disney Backstage Magic trip that we enjoyed last summer.  We wanted to try a restaurant we had never experienced before, and the thought of Il Mulino at the Walt Disney World Swan came to mind. Although not a restaurant owned by the Disney company, this trattoria maintains a top-notch reputation among restaurant reviewers and “foodies” who travel to property seeking out a quality Italian meal.  The flagship Il Mulino restaurant resides in Greenwich Village in New York City and remains a very popular establishment in the NYC fine dining scene. The chefs seek to provide an authentic Italian meal with an emphasis on the Abruzzo region of Italy. Nestled in southern Italy, this rich area of culinary diversity is renowned for both variety and richness of flavor due to the heterogenicity of its territory. Some consider the cuisine of Abruzzo as some of the finest in the nation, with strong influences from its agricultural and coastal influences. Some feel that, due to the mountains within the area, Abruzzo remained isolated from influence from abroad until well into the 20th century. As a result, the cuisine and culture both remained unique.

The atmosphere of “the mill” reveals a mixture of both new and old, almost a blending of industrial and rustic. The guest travels through the lively bar area initially as they enter the establishment, feeling as if they have escaped the chaos of the largest tourist destination in the world and transitioned to the NYC cityscape. Dark wood tones and colored glass windows impart modern sophistication as the diner walks through the bar area. As one transitions out of the bar, standing in the center of the dining room, as almost a restaurant icon, is a curious structure of foods, wines, and kitchen utensils that greets the hungry guest as they enter the main dining room. A strange brass bucket sits in the corner of this structure, almost greeting the guest like an inanimate host. The bucket makes an appearance later in the meal. Red brick arches and exposed beam ceilings lend charm to the dining room, revealing again a mixture of the contemporary with the rustic.

The only negative issue regarding the decoration and environment surrounding this beautiful establishment stemmed from the noise level. Unfortunately, this restaurant produced volume only comparable to a character dining experience populated with highly-caffeinated children. This made conversations with our tablemates—the friends we met from our ABD adventure—nearly impossible to interpret and subsequently enjoy.

The modern world acknowledges Disney as a leader in customer service. My own employer utilizes The Disney Institute, a branch of the Disney company which focuses upon advising and training organizations on the business insights and best practices of the Walt Disney company. One of the Disney Institute’s core philosophies centers around the idea of excellence in service. Disney further focuses upon service, including the smallest details, when they train their cast members in their parks. Nevertheless, Il Mulino, although residing on Walt Disney World property, is not a Disney-owned restaurant, and is not staffed by the typical cast member.

Unfortunately, this showed true during our meal at the restaurant. My family described our server’s personality as somewhat flat and, unfortunately, he lacked the personality often shared by the Disney-trained staff. Our group called the serving staff efficiency into question as we often noted empty soda glasses sitting before us. Upon asking him to split the final bill at the end of the meal, the appearance of a sigh and faint eye roll surprised a few within our party. Our assistant server shared several comments about his “quitting time,” rather than focusing upon the needs of his tables and customers. We sought out a server from another table to obtain a carry-out container for the leftovers. The quality of service definitely fell short of the expectation for this rather expensive meal.

While most agreed upon the quality of service at the meal, dissension arose upon discussing the food quality. While my wife and son felt their food quality failed to satisfy, I felt that Il Mulino provided me with the single greatest pasta dish I had ever experienced. The meal started with an antipasti selection of dried, cured sausage with eggplant and roasted vegetables served with a warm basket of breads. Unfortunately, our server failed to describe the antipasti as he set it upon the table, so I obtained the details from an internet search after the meal. For our main appetizer, we ordered the Arancini di Carne, Italian rice balls stuffed with house-made Bolognese, breaded and fried into crispy deliciousness. These delectable delights sat upon a layer of a spicy marinara sauce. Although the order contained three, I found myself wishing I had ordered my own portion so that I could continue to enjoy these flavorsome, savory items. 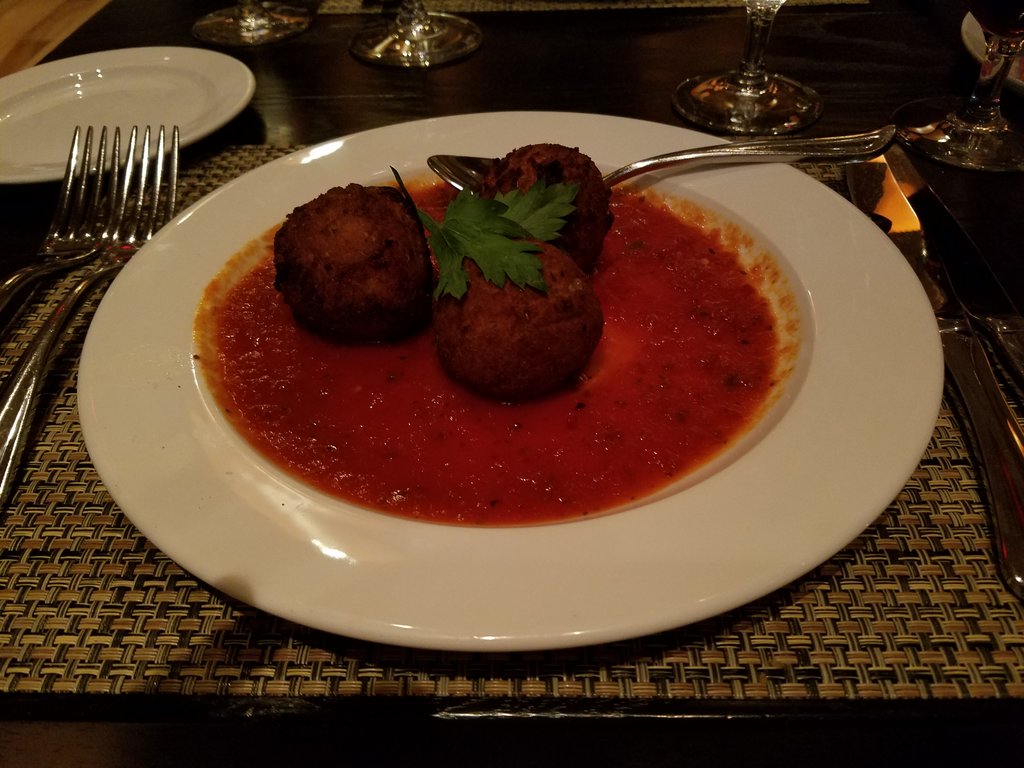 My wife chose the Gnocchi Bolognese with meat sauce for her main entrée, which, unfortunately, she compared to our favorite Italian restaurant, Palo on the Disney Cruise Line ships. Although she described the Il Mulino gnocchi as fresh and definitely not pre-packaged, the gnocchi served at Palo are much lighter and more delightful. She described the price for what she received as “a little expensive” and, again upon comparing to Palo, said that they lacked “wow”. Upon discussing the red sauce coating the gnocchi, she seemed more impressed with the red sauce served with the arancini. 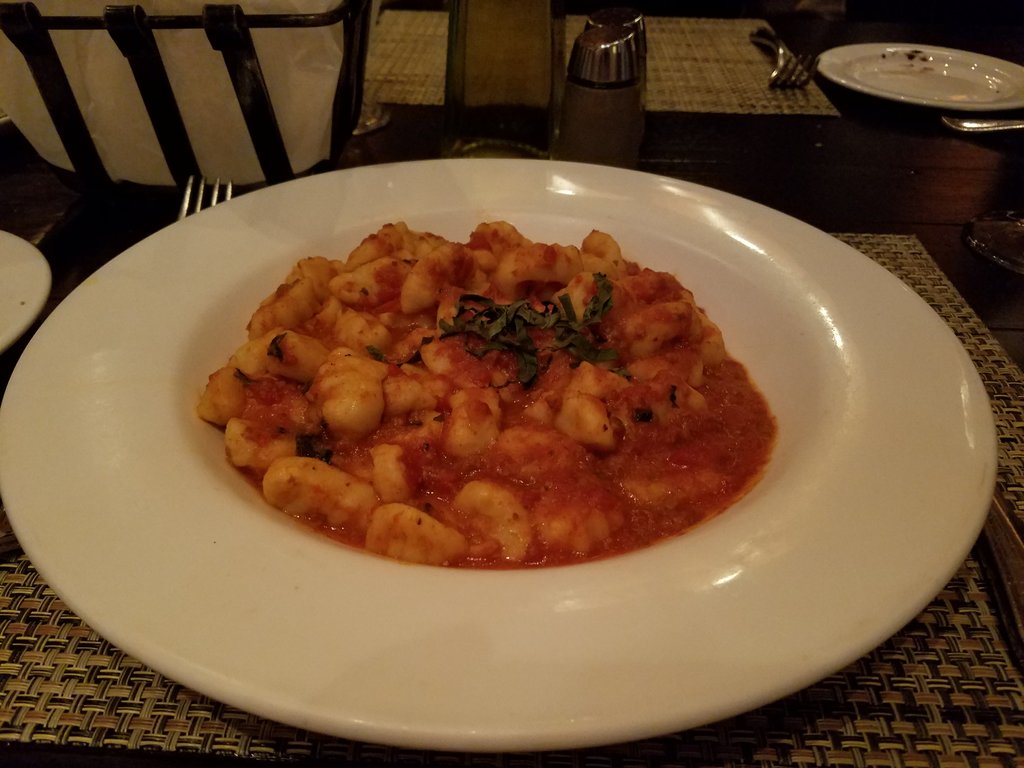 My son ordered a dish with a high reputation at Il Mulino, the Pappardelle with Tomato-Basil Sauce. Pasta experts within the Il Mulino kitchens prepare pappardelle—a large, very broad pasta noodle similar to fettucine—on a daily basis. The name pappare loosely means “to gobble up”, which should be the goal of this dish which originated in the Tuscany region. While my son shared that he tasted the freshness and quality of the pasta, the sauce lacked the savory flavor the pasta deserved. He added that an exquisite, delightful pasta added to an unimaginative sauce equals an average and somewhat overpriced dish. 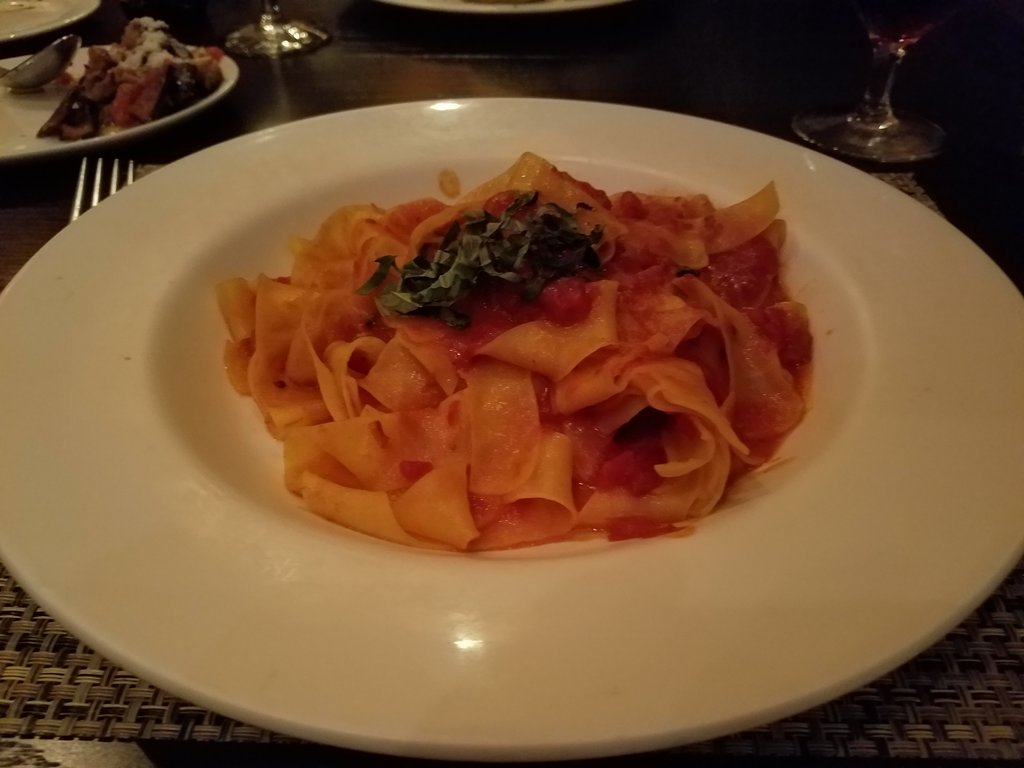 In stark contrast to my family’s dishes, I felt that heaven itself opened up and sat my dish before me. The Rigatoni con Funghi overwhelmed the palate with the masterful combination of rigatoni, wild mushrooms, spicy cherry peppers, garlic and truffle oil. Simple ingredients integrated together into a complex culinary work-of-art. Upon adding sausage, the seasoning of the meat complimented the earthy flavor of the mushrooms. 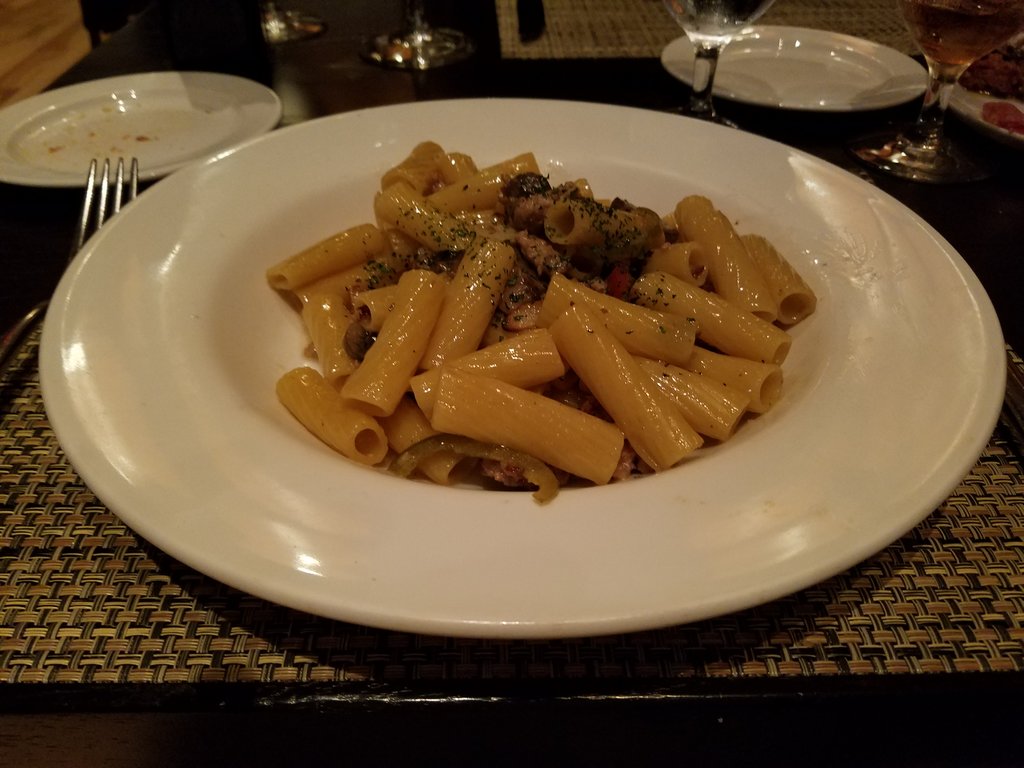 Dessert included traditional Tiramisu and Tartufo, an Italian gelato encased in chocolate and served with whipped cream, and Zabaglione, which is a cream made with egg yolks, sugar, and sweet wine. The dessert course provided us with a sweet, yet somewhat ordinary, completion to our meal. The staff brought around the aforementioned brass bucket and provided us with a shot of house-made Limoncello as a final “salute” at the end of our meal. While I found the Limoncello intense but tasty, others at the table described it as a hybrid between cough syrup and lemon-scented household cleaner. Tip included, and without alcohol, the bill totaled around $54 per person. 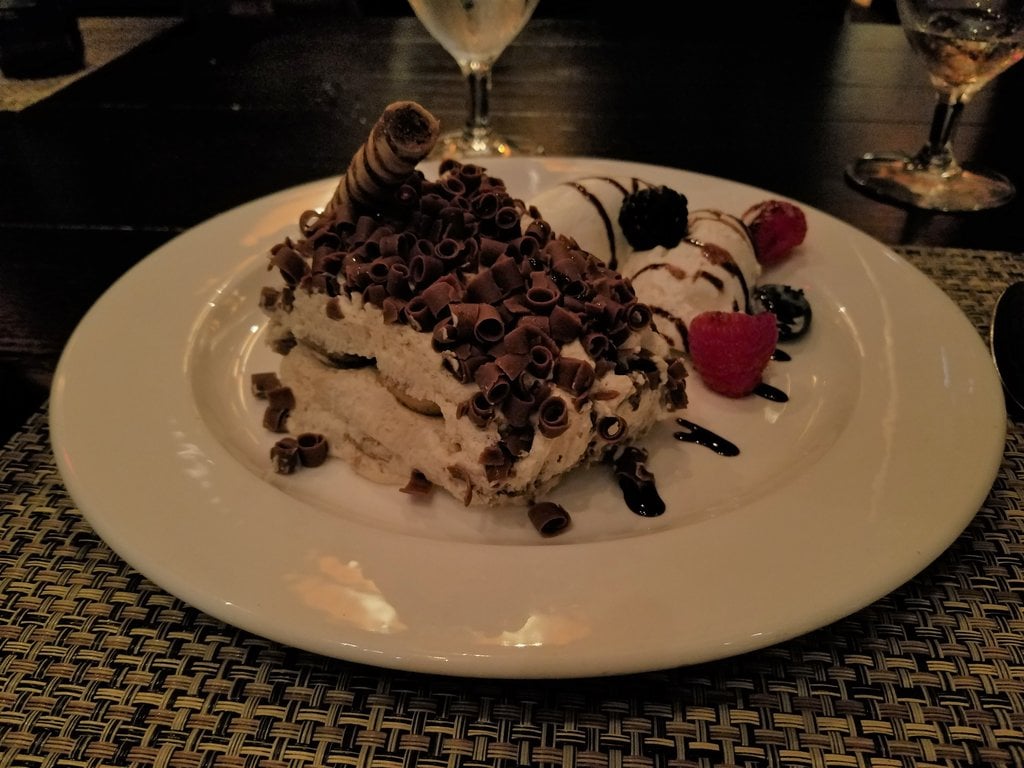 While we enjoyed our time spent with our ABD friends, the meal we shared fell short of our expectations. Even though the rigatoni meal impressed me tremendously, could I justify spending a significant amount of money again on a meal that only I enjoyed? Our family had heard so many positive things about Il Mulino. Could perhaps we have experienced the proverbial “off-night?” As I sit here and reminisce about my meal and consider the simultaneous simplicity and complexity of the rigatoni dish, I hope to find out again soon. I may, however, be dining alone.