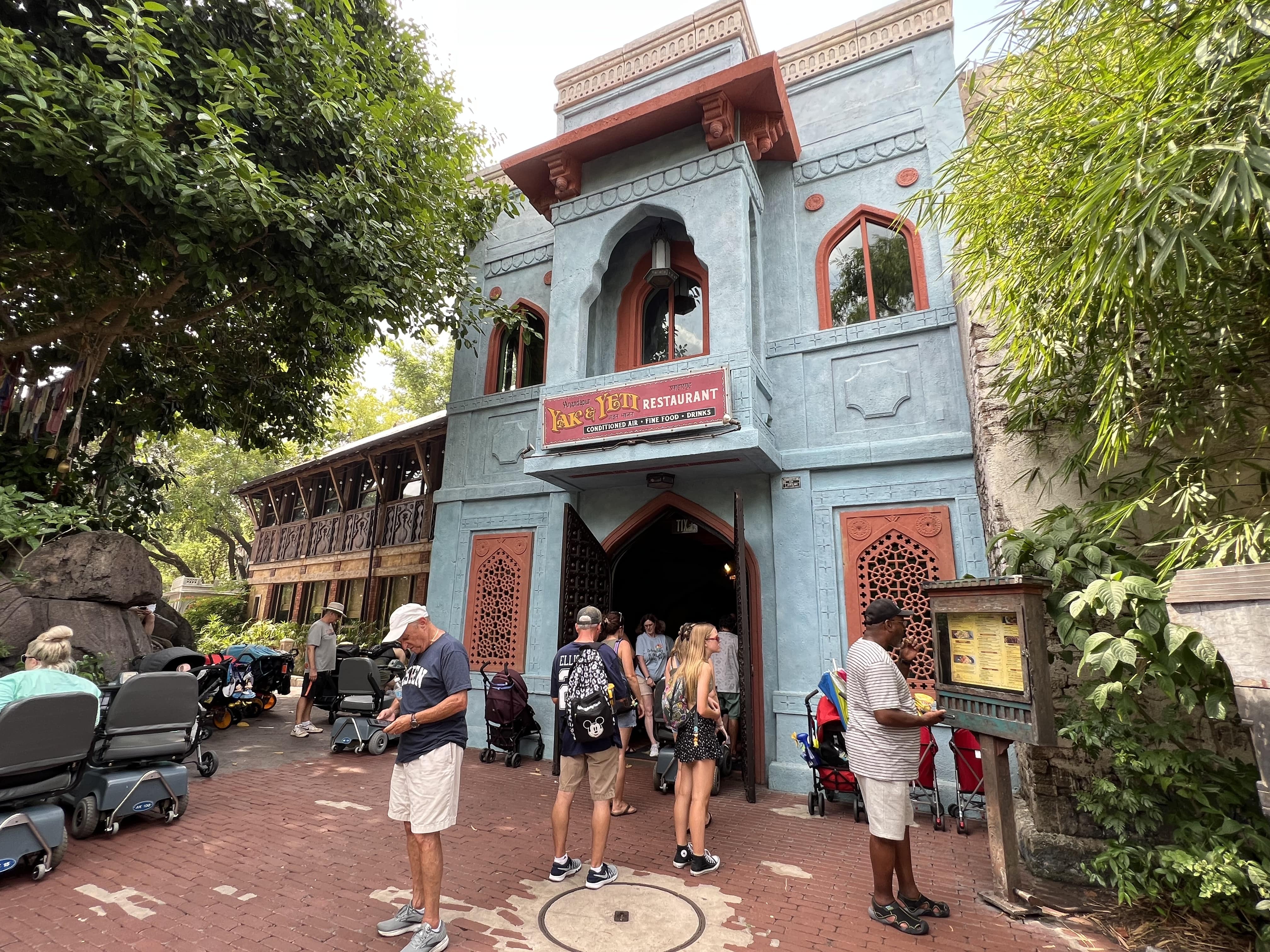 I get it. Why would you want to have food at Walt Disney World that’s similar to what you can get at home? Aren’t you and I here at the Most Magical Place on Earth to eat fun and unique items that we just can’t find at home? Yes…and, possibly, no. What if those seemingly similar items took on fresh, new twists? Enter Disney’s Animal Kingdom’s Yak & Yeti Restaurant.

Ever since the restaurant’s opening in 2007, it’s been a favorite of my family. We’ve celebrated birthdays and big days here, and we’ve even stopped by at the end of a busy park day simply to partake in the amazing Fried Wontons dessert. More about those amazing wontons later.

The restaurant itself is beautifully themed as a former bed-and-breakfast for travelers. If you stop by the location, please take time to poke around a little bit. You’ll be surprised by what you find. There are antiques and artifacts around every corner, and it’s delightful to discover them.

I had the pleasure of dining just the other evening at Yak & Yeti with Amy and Paul Krieger and John Saccheri for an upcoming Disney Dining channel review. Ready for my thoughts? Just a warning: we tried a little bit of everything. Here we go…

The menu is broken into Small Plates, Shareables (meant for two people), Soups & Salads, Noodles & Bowls, Specialties, Wok, Grilled, Sides, and Desserts. There’s also a selection of eight entrées for kids on the menu. My tried and true go-to entrée at Yak & Yeti is the Honey Chicken. Because this was a review, and I’m not there to eat for myself but for those who watch the review, I stayed away from my standard. I already know that I love it.

We began the meal by ordering three appetizer-adjacent dishes: the Pork Pot Stickers ($11.49), the Pork Egg Rolls ($11.99), and the Ahi Tuna Nachos ($19.99). The first thing that hit me as I was tying the three dishes was the impact of the dipping sauce or dressing that was used on each one. They took the item to another level, and it was a theme that continued throughout the meal.

The Pork Pot Stickers were paired with a delightful and bright soy lime dipping sauce. You can have the pot stickers pan seared or steamed, and Hector (our wonderful server) suggested that pan searing was the way to go. It put a slightly crisp exterior on the pot stickers, and I really enjoyed them. If you’re someone who needs a little something familiar, these might be the thing for you.

The Pork Egg Rolls came accompanied by a chili plum dipping sauce. The layers of flavor of this dipping sauce cannot be underestimated. It added both sweetness and heat to the egg rolls, and it was absolutely lovely.

The egg rolls were fried well, and I could’ve eaten all three egg rolls by myself. Easily.

Amy ordered the Ahi Tuna Nachos, and, admittedly, this isn’t a dish I would’ve ordered on my own. The whole raw tuna thing isn’t necessarily my scene, but I’m so glad that she suggested that we order them. The nacho chips are actually crispy fried wontons, and this element in and of itself elevated the dish. That wasabi aïoli drizzled throughout the nachos? That stuff is the bomb. It brought the heat that you would expect from the inclusion of wasabi, and the creamy coolness that you would expect with it being an aïoli. It was delightful. And the sushi grade Ahi tuna was fresh and enjoyable. Everything was topped off by a fresh Asian slaw. I was surprised by how much I enjoyed this dish.

John ordered the Sweet and Sour Chicken, and while I’m not typically going to lean in that direction, I did enjoy the dish. The chunks of chicken breast were substantial and large. It was nicely prepared, and I enjoyed what I had.

Paul’s choice was the Chicken Tikka Masala, which brought the flavors and heat level that you might expect from a curry. Again, I’m not going necessarily choose a curry-based dish while I’m at Yak & Yeti, but I enjoyed what I had. It was warm and comforting. And any dish that comes with Naan bread gets a bonus point or two with me.

Amy chose the Lobster Garlic Noodles, which ended up being a bit disappointing. The lobster in the dish was insignificant in portion and size. And a noodle-based dish that’s $35? That’s pretty crazy. I would not advise getting this entrée as I just don’t believe the value to be there.

I chose the Lettuce Cups, which is technically a shareable meant for two people. The dish came with minced chicken breast, julienned carrots, fresh bean sprouts, a bunch of fresh cilantro, and a lovely Saigon Hoisin sauce. The lettuce cups themselves were incredibly fresh. If you’re someone who enjoys building a dish and playing with your food just a bit, you’re going to love this. I cannot stress how beautifully fresh everything was.

The minced chicken breast, while looking dry when it arrived at the table, was actually anything but. It was perfect, and that little bowl of chicken seemed to just keep on giving and giving. There was enough for everyone to have some. The brightness of the bean sprouts and cilantro only helped to elevate things. If you’ve had a hot and sweaty park day (and who hasn’t had one of those in Animal Kingdom?), this might be the perfect dish for you. It won’t leave you feeling overly stuffed or heavy. The only thing I would ding it for is the price; $19 for a breast and a half or so of chicken and a bunch of fresh veggies is a bit egregious in my book. That being said, I would order it again. Hands down.

For dessert, we decided to try the Mango Pie ($11.99) and the Fried Wontons ($12.99). There were a couple of people at the table who had never had the wontons, and I’m sorry, but as far as I’m concerned, you simply must try them when you’re at Yak & Yeti.

I had never tried the Mango Pie before. I know that the version of the Mango Pie that’s sold at the Yak & Yeti Local Foods Cafe counter service next door to the restaurant has a bit of a cult following, so I had a feeling the table service’s version would be good. It was. It was cold and creamy and a little bright. I would’ve enjoyed a bit more mango flavor, but for what it was, it was good. It was served with diced strawberries and mangoes and a couple of fruit-based sauces on the side.

Those Fried Wontons? Amazing. The honey vanilla drizzle (which ended up being quite more than a drizzle on our plate) is good enough to bottle and sell on its own. I would buy it. The vanilla ice cream is delicious, and the fresh pineapple and the cream cheese-filled wontons are incredibly good. I know, I know. Cream cheese-filled wontons may not be what you think of when you think of dessert, but for the love of all things sweet, please give them a try. And then let me know what you thought. Warm and toasty and simply perfect.

Yak & Yeti, because of its backstory and theming, is divided into different rooms and nooks and crannies. I was so glad that we were seated in the upstairs, somewhat low-slung room that overlooks the main path leading into the Asia section of the park. It’s a nice, bright, and intimate space.

While we had a tabletop filled with food, I know that there are so many things left for me to try on the Yak & Yeti menu. If you have a go-to favorite, please let me know in the comment section below. I would love to try something new the next time I’m there!

And be sure to keep an eye out for the Disney Dining channel review vlog. I’ll be sure to drop it below once it’s published. 🙂