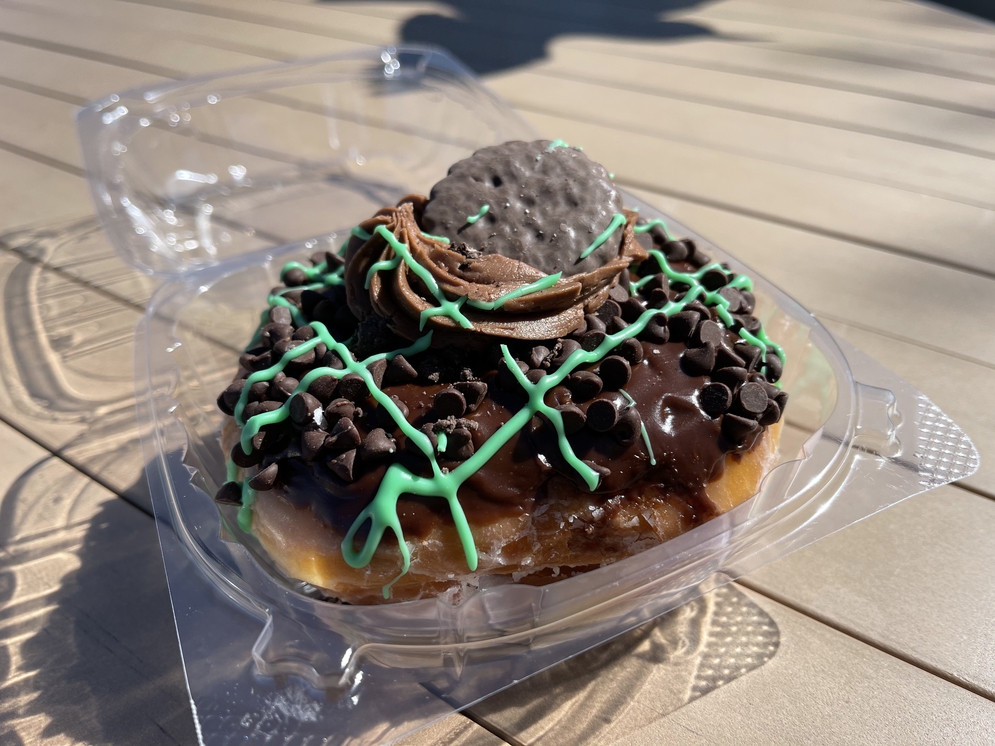 As a former Girl Scout and lover of all things sweet, I felt it was my duty to make a trip over to Everglazed Donuts & Cold Brew to try their limited-time Thin Mint Cookie Donut. This special Girl Scouts collab donut will be available at Everglazed during the month of February, and sells as part of their Funky Bunch donut offerings for $5.50.

As I settled in with my donut, it was clear that Everglazed came to play. All of their donuts, Thin Mint Cookie version included, are a sight to behold. They look like a donut-lovers’ dream: over-the-top with toppings galore. However, when Craig and I visited the shop on opening day, I found things to be a bit too sweet. I was really hoping this wasn’t going to be the case with the Thin Mint Cookie donut. Thin Mints are my favorite Girl Scout cookie; surely Everglazed would do the beloved cookie justice, right?

The shop’s Chocolate Iced yeast donut serves as the base for today’s treat, and it’s covered with a generous dollop of milk chocolate frosting, gobs of mini chocolate chips, and a drizzle of mint icing. An entire Thin Mint Cookie tops the whole thing off.

If you’re someone who enjoys filled donuts, this might not be the treat for you. While some of the milk chocolate frosting is piped into the donut hole, that’s it.

This donut is very good. The yeast donut itself is light, pillowy and substantial. If you’re spending $5.50 on a donut, you want a big donut. This one checks that box. The chocolate icing is sweet without being overly so, and the milk chocolate frosting is creamy and mild. The mini chocolate chips add in a bit of texture (and more chocolate!), and the Thin Mint itself was crisp and perfect. I was afraid that the cookie might get a bit stale from sitting on the shelf, but my fears were unwarranted.

The only thing that I knock the donut for is the lack of mint flavor. If we’re going to have a Thin Mint-flavored donut, let’s really have one. The mint flavoring needs to be dialed up to really be a top-of-the-heap standout, but that’s coming from someone who loves a great chocolate and mint pairing. If you favor a milder mint taste, this treat would be a good option for you.

Walt Disney World annual passholders are given a 10% discount at Everglazed, so be sure to have your AP card handy during checkout.

If you’re wanting to hunt down a donut of your own, Everglazed Donuts & Cold Brew can be found in the spot that formerly housed Pop Gallery, right next to Splitsville Luxury Lanes.

Be sure to check out my review of the donut for the Disney Dining YouTube channel below: