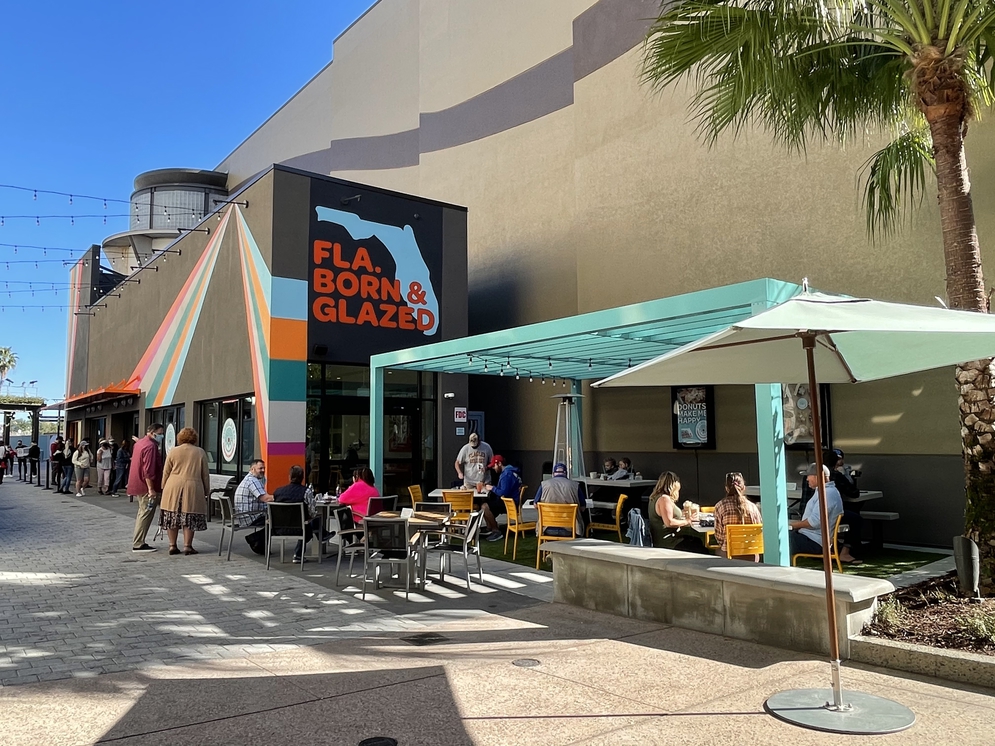 Everglazed Donuts & Cold Brew opened its doors in Disney Springs‘ West Side today, and, as only would be right, Craig and I were there to check out the location and their offerings. Have a sweet tooth? Settle in and we’ll go over the basics.

We’ve all been there and done that in a donut shop: standing there, gazing with wide eyes at all of the sweet possibilities spread out before you. Everglazed Donuts and Cold Brew does not disappoint in this category. If you’re like me, you’ll want to stand there for a few moments and try to wrap your brain around the choices that you have. And there are choices galore.

Essentially, if you’ve come to Everglazed looking for donuts, you have two categories to choose from: “The New Classics” and “The Funky Bunch.” The classic donuts are $4.50 each, and their funky, plussed up counterparts are $5.50 each. While we’re talking about cost, let me just say that, yes, these donuts are pricey without necessarily needing to be. Yes, they are fancy and pretty and something of which you’ll likely want to take a copious amount of pictures, but they are on the spendy side. If it helps, when guests purchase a half dozen donuts, they get $3 off, and if a dozen is purchased, the discount is $6.

The interior of the shop is a modern take on a donut shop while also channeling a bit of hip retro. And, in the font and colors used on the signage, just a smidge of Dunkin’.

As you approach the shop, which is located just next door to Splitsville Luxury Lanes on the spot formerly used by Pop Gallery, you’ll notice that a QR code has been provided for you so that you can peruse the menu on your phone while you wait. As you would expect, physical distancing markers are in place throughout the queue as well as inside the shop. According to Everglazed’s social media, they’ll be utilizing a virtual queue during their opening period, but there was no wait early this morning.

There’s seating both inside the shop and on a patio just outside. And there’s a little bit of everything on the menu, from loaded fries to burgers served on a sweet bun or donut, and from spiked coffees to a nitro cold brew coffee that features peanut butter and chocolate syrups, crushed Reese’s Peanut Butter Cups, and is topped with a Peanut Butter Explosion donut.

Since we have the Peanut Butter Explosion donut on our minds, let’s just start there. This donut is highly photographable. It’s a sight to behold, and as I found out in moving the donut from the box to a spot where I could take a picture of it, it’s hefty. This glazed yeast donut is slathered in chocolate icing and a more than generous portion of peanut butter chips. The donut is then topped off with a Reese’s Peanut Butter cup and a dollop of chocolate peanut butter frosting. Dear me.

If the No Way José is your go-to ice cream sundae at Beaches and Cream, this donut is for you. It is very sweet, and is chocolate and peanut butter overload. This is one of the Funky Bunch donuts, so it’ll set you back $5.50. If you’re looking for something sweet to eat after a Disney Springs dinner, this might be a nice one to share with family, but it’s definitely not one I’d eat in the early morning again. Whew.

The donut I wanted the most is the next one we’ll cover: the Fruity Pebbles donut. Fruity Pebbles is a favorite cereal in our house. It’s a cereal that I think can do no wrong, and sometimes there’s just nothing better than a big bowl of those yummy, colorful, crunchy pebbles, so I naturally gravitated to it as soon as I saw that it was on the menu.

The Fruity Pebbles donut ($4.50) is, as are the majority of Everglazed’s donuts, a glazed yeast donut (makes sense with a name like Everglazed, right?). To the glazed donut they add strawberry icing, a coating of Fruity Pebbles, and a dollop of vanilla frosting. This donut is very, very sweet. I enjoyed the crunch of the cereal that contrasted with the light, pillowy texture of the yeast donut, but again, this donut is incredibly sweet. The strawberry icing was nice, and isn’t a flavor that I typically choose when I picking out donuts, but it’s not going to be a donut that I get again.

The Purple Glazed Ube has more of a dense texture than the glazed yeast donuts do, but it was still light and soft. This donut was the perfect mix of what you might want from a donut at Disney World: yummy, unique, and something of which you might want to take a few pictures. The purple sanding sugar used on the top of the donut added a crunch to the treat, and looked radiant in the morning sun. This is a donut that I’d buy again.

Everglazed has a variety of cold brew coffee creations on the menu in addition to their nitro cold brew offerings. I tried The Salted Caramel Cold Brew, which contained cold brew, milk, salted caramel syrup, and whipped cream. This drink was very sweet, and while I continued to sip on it while Craig and I were reviewing the donuts, it was just a bit much in the sweetness category.

As I sit here writing this, I’m left with a funny taste in my mouth, and no, it’s not the lingering sweetness from the donuts and coffee. I can’t help but compare Everglazed, which is owned by the same parent company as Splitsville, with Gideon’s Bakehouse

, which recently had a season of soft opening in their new Disney Springs location. I know it’s comparing donuts to cookies, but as far as value goes, between the amazing, almost half pound cookies and the highly immersive theming, I feel like I’m getting my money’s worth at Gideon’s, and I just don’t feel that I am at Everglazed.

Is Everglazed fun? Yes. It’s fun to stand there in front of a wall of carefully crafted donuts and choose something yummy to try. It’s fun to bite into that donut and it’ll certainly be fun to take a picture or four of it for your Instagram account. If you’re looking for something new and different to add into your Disney Springs visit, a stop by Everglazed might be an enjoyable experience. But I fear that it might be just that: a one and done experience.

Craig and I filmed a Disney Dining Show review of all of the treats that we tried this morning, and in it, we go into further detail regarding our thoughts. And, if you watch the video, you’ll get to see Craig try one of Everglazed’s Milky Way drinks. Picture the milk left over in the bottom of a cereal bowl, and you’ve got it. And Craig also tries the Maple Double Bacon donut in all its bacon-y glory. You can watch the video below.

So, what do you think? Will Everglazed Donuts & Cold Brew be on your WDW must-do list?