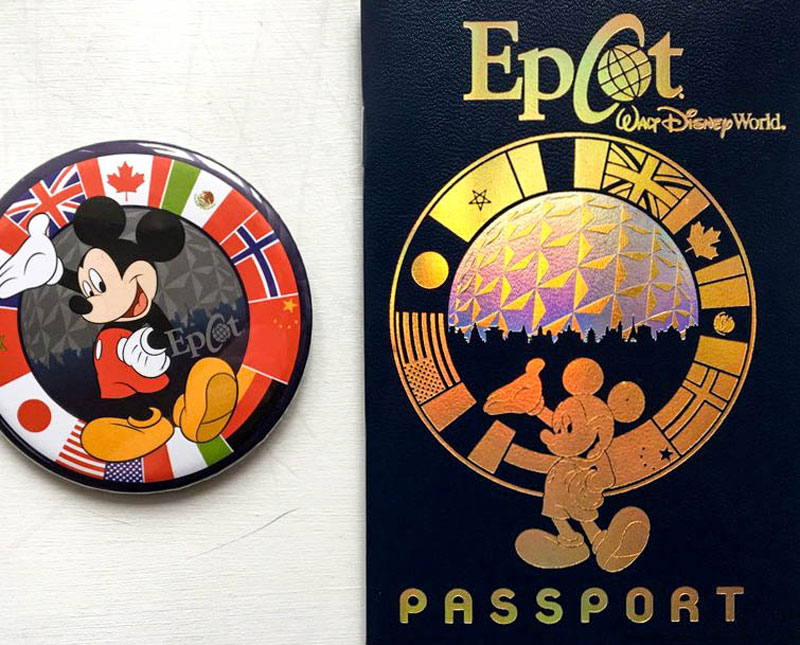 As any Disney-going parent knows, Epcot can be a tricky park to bring a child to. Future World boasts a handful of child-friendly rides and character meets, but once you cross over into World Showcase, you can practically anticipate the breakdowns and choruses of “I’m bored”.  No amount of Mickey bars and bubble wands can appease them, at least not until you make it to Norway — assuming you were able to snag a coveted FastPass for Frozen Ever After.  Wouldn’t it be nice if there was a way to make Epcot’s World Showcase more kid friendly? Well there is! And it won’t break the bank.

Did you know that Epcot offers two year-round kid-oriented (though anyone is welcome to play) scavenger hunts perfect for giving young visitors that extra incentive to have fun in World Showcase? The first is the Epcot Passport Kit. Packaged in cardboard to resemble a suitcase, this kit contains one Epcot passport, a sticker sheet and a large Epcot pin. This is perfect for kids of all ages and encourages Epcot travelers to visit the Kidcot center in each of the 11 world pavilions and speak to a cast member representing that country. Kids will learn about the country’s customs, sports, food, and traditions in a way that feels fun, not forced. The cast member will sign and often decorate a page of the passport and stamp it. The Epcot World Showcase Passport Kit retails for $11.99 (plus tax) and can be purchased in any kiosk in Epcot or prior to your visit on the Shop Disney Parks App. Cheap Parent Tip: If you don’t want to go all out for the Epcot Passport kit, you don’t have to. Epcot also gives kids autograph-able Duffy the Bear cardboard cutouts for free at each Kidcot station. Your Epcot explorer can have a cast member from each of the 11 pavilions sign and stamp their Duffy at no cost. Last time we were there, the lovely cast member in Canada had a bunch of different character cutouts which included not only Duffy, but also Groot and a few Star Wars characters as well; so it may be worth inquiring about if your child is into a specific character. The second scavenger hunt will appeal to kids who can’t put their smartphones down, even on vacation at the Most Magical Place on Earth.  Agent P’s World Showcase Adventure is a FREE (how many things can you name that are actually free at WDW?) interactive game for kids of all ages. Anyone interested can sign up online once you are ready to play. After getting signed up, you will then be connected via smartphone to the game, where you will be texted a series of clues leading your party to six different pavilions in World Showcase where you will complete a different adventure.  Your entire party (up to nine people) can play on one device, making it a great family game! The only downside is that it can be time consuming to complete, and if you don’t finish in one day your game will not be saved. You can access an overview of the game on the Walt Disney World website where it is listed as an attraction. It should also be noted that Epcot has scavenger hunts tied into their festivals, as well as during certain holidays. Your kids (and yourself) can participate in smaller-scale scavenger hunts during Easter, Christmas/Hanukkah/Kwanza (during Festival of the Holidays), as well as in conjunction with Festival of the Arts, Flower and Garden Festival, and Food and Wine Festival. These scavenger hunt booklets typically come with a map and stickers, and require the player to visit different locations within Epcot (Future World and World Showcase) and find each corresponding place or item on the map. Once the map is complete, your kids can turn it in for a surprise (usually some variation of a pin or a set of pins specific to that festival). These scavenger hunt kits will run you $5.99 (plus tax) and can be purchased inside Epcot. Both of these scavenger hunts have been game-changers for our family as they allowed us to enjoy World Showcase without any complaints! They also make for fun and unique souvenirs.