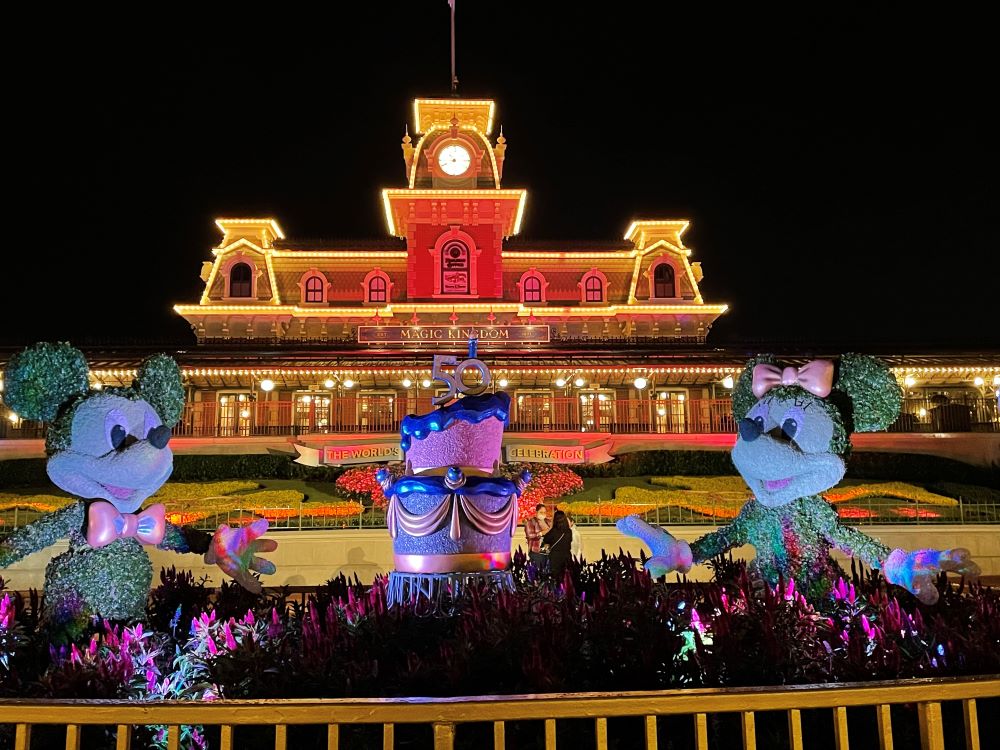 I just returned from Walt Disney World filled with a few days of adventure and bliss. This was my fall trip (my last trip was over the summer) and I was looking forward to checking out Walt Disney World’s 50th Anniversary celebration. As a non-local, I followed all opening day reports and was eager to go there myself and check things out. Having just returned this week, I would love to tell you all of my impressions, opinions and tips for visiting Walt Disney World during their 50th Anniversary as a non-Florida resident.

The Walt Disney World parks and resorts will be celebrating their special 50th Anniversary for 18 months! Having been there during the first month of celebrating, I am curious as to what Disney has in store for us in the coming few months. My first impressions, outside of the opening day, October 1st, is that it is a slow roll out, and not as intense as I thought it would be. I guess I knew from reading before my trip that it was going to be a tamped down celebration, but you don’t realize it until you are there, possibly expecting something bigger that just wasn’t. This is understandable; I just wasn’t expecting the calmness of it all, probably because I am used to Disney being much more elaborate in its past celebrations.

The highlights for me were the two new fireworks shows. They were both special and glorious. What an amazing time we had with the music, the new anniversary song (The Magic Is Calling); both parks lighting up the night skies through the visuals and the stories they told. I loved both shows and understand both received mixed reviews; I was partial to Disney Enchantment at the Magic Kingdom more than Epcot’s Harmonious, but how can you go wrong with enjoying TWO nighttime fireworks shows?! I felt lucky to be able to see both of them and they were definitely the highlight of our vacation.

I love scavenger hunts, so the search for the Fab 50 golden character statues was so much fun. They were beautiful, bold, shiny, fun to find, and a great picture spot. Tip: did you know that each statue is true to the size of the character? So good luck finding Tink and Abu! You can find the golden statues in all four parks; most are easy to find, except for Tink, Abu and Stitch (no spoiler alerts here)!

The décor for the 50th is mostly seen throughout the parks with flags, streetlight banners, lamp post flags and bunting-type flags that say: Walt Disney World 50 The World’s Most Magical Celebration. They are everywhere, and outside of the beautiful Cinderella Castle decorations, that is how you will know visually it’s the 50th. I was not impressed by the flags; I felt they lacked color and glitz. If you visit Disney Springs, you will find beautiful 50th décor in The World of Disney. Besides flags, I loved how the buses on property had festive wrap-arounds decorating many of them. Tip: great photo opportunity in front of the buses! There were many shimmering evening lights for viewing like Epcot’s Spaceship Earth and other Beacons of Magic you can explore. They were beautiful in the night sky.

Cupcakes were clearly the dessert that celebrated the 50th all around, but if you wanted to buy something to take home, that would be the 50th merchandise. This is my biggest fail and I am mad at myself for waiting to actually go to the parks to shop. There is a strain on the supply chain for merchandise and the special items I was personally searching for, and excited to bring home with me, weren’t there.

My biggest tip is: if you see it online, buy it on shopDisney, because it may not be there for long. If you see it in the Disney parks, buy it immediately, because it won’t be there later in the day. Unfortunately, resort room delivery on merchandise is still suspended, so carrying things around was not my first choice. “Oh, I’ll buy it on the way out” is not a good mindset, because it won’t be there. IF YOU SEE IT AND WANT IT, BUY IT IMMEDIATELY. I can’t say that enough.

I enjoy Disney puzzles as a hobby; I should have purchased the 50th puzzle online when it came out, but I was excited, with the mentality of years ago, that I would go to the parks and have fun shopping. The puzzle was sold out, but I persevered and went back to the Emporium the next day on Main Street, U.S.A. and got lucky because it was back in supply. However, many items I was holding off on were not there. Good luck!

My favorite celebration moment was strolling upon The Voices of Liberty singing The Magic Is Calling in their new repertoire. During their first set of the day they did not sing it, but while strolling around Epcot World Showcase a couple of hours later, they were back and I got to hear their version of the song. Magic! Tip: do not miss it!

Over the next 18 months, I expect to see more golden statues erected, more 50th Anniversary pressed pennies for which to hunt, and hopefully more merchandise back in supply (fingers crossed). Also, please Disney, make Pooh Bear a 50th plushy, thanks! Oh, and make a button, thank you. I assume the cupcakes will always be there and the fireworks shows are not to be missed; you be the judge of which show you liked over the other!

Overall, I thought the anniversary celebration is more of a nod to 50 years and I understand why. My 50th birthday this year was exactly the same. More subdued than perhaps the big hoopla that may have been if we hadn’t endured, struggled and been challenged by so much lately. Supply chain issues don’t help either. The glitz and glamor, like I remember from celebrating Disneyland’s 60th anniversary years ago, cannot be compared. But the magic is there…

What rose above the souveniers, the shows, and the cupcakes was the SPIRIT of the parks. It’s is alive and bright. The MAGIC is beaming within the cast members, the sun is shining in the Florida sky, giving us warmth and happiness and reminding us that you don’t need confetti and razzmatazz to be festive; you need friends, love, and community to celebrate 50 years of health, happiness and peace. And that is exactly what I felt this week. Looking forward to the next 50, Walt Disney World!